Smecta for children: instructions for use 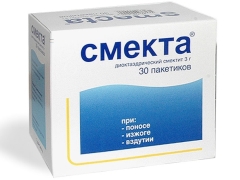 Smecta is one of the most popular sorbents. It is valued for its natural origin and additional protective effect on the digestive tract. Such a drug is prescribed for adults with pain and various dyspeptic symptoms, but diarrhea is the most common reason for taking Smecta. Is this remedy used in the treatment of children, in what dosages is it allowed in childhood? How to dilute the drug and can such a drug harm the little patients?

The drug is produced in France in these two convenient to use forms: 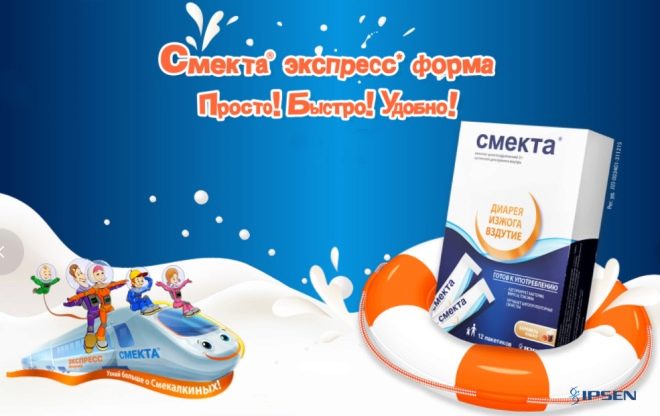 The main component of both forms of the drug is called dioctahedral smectite. One packet of powder or suspension contains it in a dose of 3 grams. In the manufacture of powder to smectite add dextrose monohydrate and flavoring vanilla and orange (in orange medicine) or vanillin (in the preparation with vanilla flavor). The sweetness of the Smekta powder form is also due to the sweetener, sodium saccharinate. 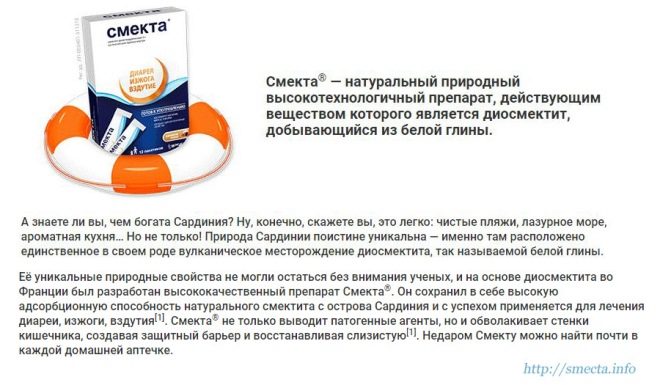 Additional components of the finished suspension are ascorbic and citric acid, potassium sorbate, purified water and xanthan gum. The sweet taste of this version of Smekta is provided by sucralose, and the pleasant smell and flavor is provided by caramel and cocoa flavors. 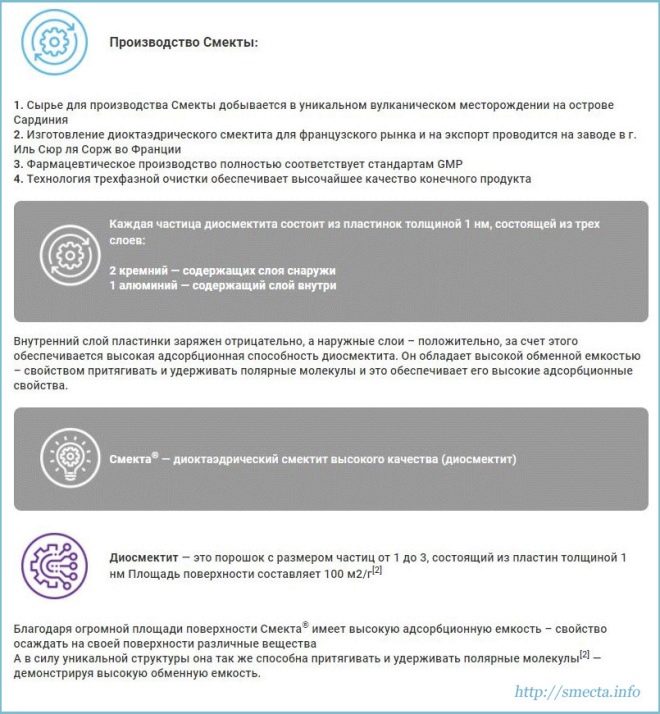 The main ingredient of Smecta is aluminosilicate in structure. It has a natural origin and has antidiarrheal effect due to such effects:

When used in therapeutic dosages, the drug does not affect intestinal motility., that is, the drug does not inhibit peristalsis. Smectite also does not change the color of the feces and is not detected by X-ray examination of the intestine. In addition, smectite aluminum is unable to absorb into the intestinal wall even in the presence of colitis or other gastrointestinal lesions. The drug taken inside is not adsorbed, but leaves the digestive tract unchanged.

The most frequent indication use of Smecta diarrhea, the reason for which are:

In addition, Smektu is discharged for other discomfort symptoms:

At what age are children prescribed?

As notes annotation to Smekt, this tool is safe for patients of any age and can be safely used from birth. Doctors prescribe such a medicine and newborns, and children 3-6 years old, and schoolchildren or adult patients.

However, for the smallest, its use is allowed only after a doctor's prescription.

Despite the rather extensive list of indications, there are situations when Smecta does not apply. The drug does not give:

In addition, Smecta is not recommended for the treatment of children who suffer from chronic constipation. If the drug is prescribed to such patients, it is only under medical supervision.

In some children, even with the observance of the dosages recommended by the doctor and the frequency of taking Smecta, constipation appears. In such a situation, the dose of the drug is reduced, and the problem in most cases is immediately eliminated. Sometimes after taking the suspension, flatulence or vomiting occurs, which requires its cancellation.

Very rarely, the drug provokes an allergic reaction in the form of urticaria, itching or other unpleasant symptom. In this case, further use of the drug and its analogues with the same active compound should also be abandoned.

Smecta is recommended for most patients about 1-2 hours before meals, but if the child is diagnosed with esophagitis, medication must be drunk after meals.

Babies are advised to give the drug between feedings, but if this is not possible, then let's take it with food.

The method of preparation of the suspension of powder

Dry medicine from one sachet should be dissolved in clean water. If the medication is prepared for a child, it is enough to take only 50 ml of liquid. In addition, the powder can be added to any semi-liquid products, for example, milk mixture, compote, liquid porridge, milk or fruit puree.

First, water or another liquid is poured into the container, and then the powder is slowly poured in and the suspension is actively stirred so that no lumps or inclusions remain in it. A mixer or blender can also be used to prepare the solution. After mixing the powder with water, it should be set aside for a short time so that the suspension is infused.

If the diarrhea is acute, then in the first three days it is possible to use a double dose, for example, a 6 month old baby can be given a suspension of two sachets per day, a child of 1.5 years old can take medicine from 4 sachets, and a teenager 12-13 years old or older can take 6 day bags Smekty. Next, go to the standard dosage indicated above.

How to take a suspension?

The daily dosage prescribed by the doctor is divided into at least 2-3 doses. For children older than two years, the suspension is prepared immediately before ingestion, since such patients require 1 bag of powder at one time.

For children up to 2 years old, the medicine in the powder should be diluted with water or another liquid at once in a full dose. For example, if the doctor said to give two sachets per day, they are immediately combined with water or liquid food, and then divided into several equal portions so that the baby takes all the medicine in a day. The prepared suspension is not left the next day.

Before giving medicine to a child, it must be mixed (especially if the medication was diluted some time ago). It is convenient to give the smallest patients Smekta from the bottle. Older children are usually offered a spoon.

School-age children can drink the powder from a glass or mug just before taking it.

As regards portioned sachets with ready-made suspension, before taking the package, you should knead them with your fingers, then tear off a corner and squeeze the paste into a spoon. Such Smektu can not be diluted, taking straight from the spoon. If in this form it is impossible to give the medicine to the child, the suspension can be squeezed into food (mashed potatoes, porridge) or a glass with a small amount of water, and then given like a suspension prepared from a powder form.

Most often, the medication is prescribed in a short course lasting from 3 to 7 days. How long to take the drug, determined by the rate of improvement of the patient. If Smekt was prescribed for acute diarrhea, it is necessary to drink the suspension for at least three days, even if the symptom disappeared earlier. With a tendency to constipation, they take medication as short as possible. For example, if the condition improved on the second day, the medication is canceled.

Longer than seven days Smecta is usually not accepted. If the child has drunk off the adsorbent for a week, but loose stools, pain, flatulence or other symptoms still remain, a medical examination is required.

A small patient should be shown to the doctor when a fever or abdominal pain appears while taking Smecta. 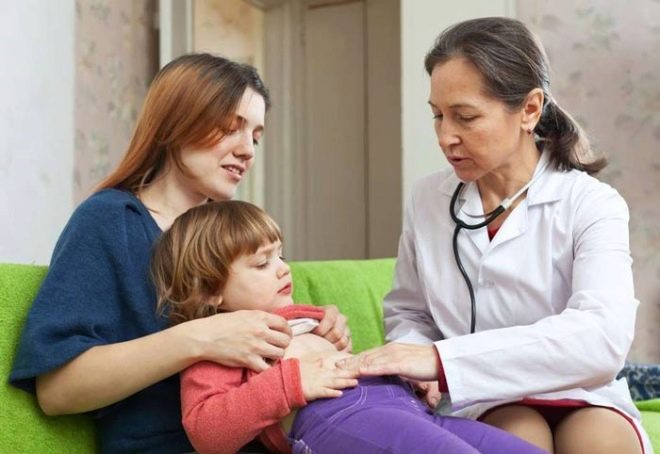 Although Smecta is considered a safe for children drug, which allows it to be given even to babies up to one year old, but show the child to the pediatrician before using the medicine. The causes of loose stools are different, some of them will not affect the sorbent, and time will be lost, which is a danger to the health of the peanut (this is especially dangerous for infants).

If the child has been diagnosed with poisoning, then before applying Smecta, it is recommended to wash the diseased stomach. This will free the child's body from toxic substances and increase the effectiveness of the effect of smectite.

If your child has diarrhea or vomiting, it is important to additionally prescribe special remedies that will become the source of water with mineral substances lost with liquid stools and emetic masses. They are called rehydration preparations.

It is these medications that are considered pediatricians to be the basis of treatment if a child has diarrhea or vomiting, and Smekta acts only as a supplement to them. These drugs include Regidron, Hydrovit, Gastrolit or Humana Electrolyte. In addition to them, the child can be given compote, juice, mineral water, tea or any other liquid.

If a small patient refuses to drink Smekt, do not force him or pour the suspension in force.Try to persuade the toddler and give the drug in small portions, disguising it in your favorite food.

As already noted, the drug is allowed to apply even in the smallest children who have just been born. So babies Smektu discharged not only with problems with the digestive tract, but also with postpartum jaundice.

If there is an excess of bilirubin in the blood of the baby for 2-3 days of life due to the active disintegration of embryonic hemoglobin and liver immaturity and the skin becomes yellow, the doctor may prescribe a Smecta bag a day to accelerate the removal of such a substance from the newborn's body. In this situation, the drug is usually taken 3-5 days.

Since taking an excessive amount of smectite may affect intestinal motility, due to the excess dose of the drug, most patients become constipated. Other negative symptoms, even a very large amount of the drug does not provoke.

Smect should not be taken at the same time with any other drugs, because due to the adsorbing properties of such a drug, the degree and speed of absorption of other drugs will decrease.

If any other means are discharged to the child, then there should be a gap of 1-2 hours between taking them and applying Smekta.

Both forms of Smekta are over-the-counter medicines, so they are freely purchased at the pharmacy without the need to take a prescription from a doctor. The average price of 10 portion sachets of powder is 140-150 rubles. For the packaging of bags with caramel suspension you need to pay about 300-350 rubles. 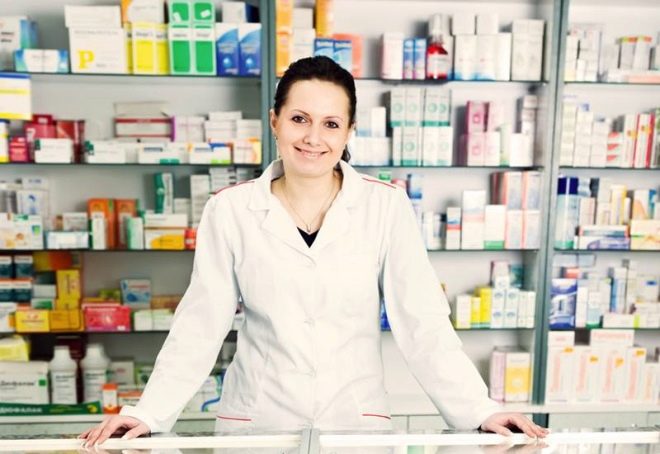 Bags with powder or suspension should be stored at home out of the reach of children at a temperature not higher than 25 degrees Celsius. Smekta powder expiration date is 3 years and is marked on each sachet of the drug. It must be checked before giving the suspension to the child.

The finished suspension in portion packets can be stored for up to 2 years from the date of manufacture.

Almost all the reviews about the treatment of children with Smecta in case of poisoning, intestinal infection or other problems with digestion are positive. In them the main advantages of the drug are called:

Due to such features, Smectu is often included in the composition of the home first-aid kit as an effective remedy for diarrhea, bloating, abdominal pain, vomiting and other discomfort symptoms.

Among the minuses of the drug, mothers mention the frequent appearance of constipation after taking it, and some children find the taste of Smecta not very pleasant and refuse the medication. The cost of the drug in powder is considered by most parents as affordable, and the ready suspension, though called expensive, is considered more convenient to use.

Drugs that also contain dioctahedral smectite can be used instead of smect.

Smektu can also be replaced by medicines with a different composition and mechanism of action used in green stools, food toxicoinfections, a negative gastrointestinal reaction to drugs and in other cases.

These drugs include the following.

How Smecta acts on the intestines, see the following video.

Is Smecta effective for vomiting in children?

Pepidol for children: instructions for use

The use of oak bark in the treatment of children

Baktisubtil for children: instructions for use

The use of Smecta for diarrhea in a child

Polysorb for newborns and infants: instructions for use

Polysorb for children: instructions for use

Laktofiltrum for children: instructions for use
Information provided for reference purposes. Do not self-medicate. At the first symptoms of the disease, consult a doctor.