Blood test in children with mononucleosis 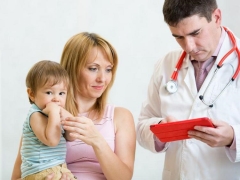 A disease such as infectious mononucleosis is often found in children. It is caused by a herpes group virus named after Epstein-Barr virus that scientists discovered. And so the second name for this disease is VEB infection.

The disease is transmitted from a sick child to a healthy one through direct contact and by airborne droplets. Its incubation period is quite long and can reach several months, and the first manifestations will be fever, sore throat, swollen lymph nodes, weakness and nasal congestion.

To confirm the diagnosis, a complete blood count should be taken, because its changes in mononucleosis are specific, that is, they make sure that Epstein-Barr virus is present in the children's body.

Decoding of the complete blood count in infectious mononucleosis

If the child has such an infection, then the blood test results will change like this:

What other tests should be taken

To clarify the diagnosis and determine the presence of complications of the child will be sent to:

How many times to take a complete blood count

A child with infectious mononucleosis is carried out with several blood tests, since the indicators may differ at different stages of the disease. For example, the presence in the analysis of atypical mononuclear cells may not be detected in the first weeks of the disease. In addition, in the course of treatment, a pediatrician will need an analysis result to identify complications, and after the acute phase, a clinical blood test will show how the recovery process is going.

Dr. Komarovsky on the symptoms and treatment of mononucleosis in children

The rate of mononuclear cells in the blood of a child

Symptoms and treatment of infectious mononucleosis in children

Diet for children with mononucleosis

Basophils in the blood of a child

High hemoglobin in a child

A child's leukocyte count is lowered in the blood.

Elevated platelet count in a child’s blood
Information provided for reference purposes. Do not self-medicate. At the first symptoms of the disease, consult a doctor.