Care and frequent problems in children after ear piercing 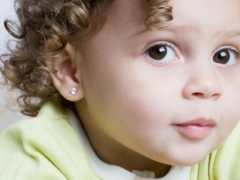 The decision is made - the child will pierce the ears. Usually, such a decision is not easy for parents. And the more natural is the desire of moms and dads to learn a little more about baby piercing. The greatest concern is the “after” period. How a child can bear the consequences of a mini-operation and how to help him, we will tell in this article.

There is no consensus among doctors about ear piercing in childhood. There are many competent and not very competent opinions, judgments and hypotheses. Most pediatricians are inclined to believe that piercing the earlobes of the child will not cause much harm if there are no obvious contraindications. These include diseases of the heart and hematopoietic system, mental illnesses and epilepsy, diabetes, skin problems, allergic reactions, problems with hearing and vision, and the state of immunodeficiency.

Dermatologists warn about the possibility of development allergic contact reaction to metalswhich are contained in jewelry alloys. And reflex therapists say that ear piercing can cause irreparable harm to the baby's health, because the most important nerve active points that regulate the activity of many internal organs are concentrated in the ear lobe.

Ophthalmologists urge to be extremely cautious, because some points on the ear lobe are responsible for the visual acuity of the child, and otolaryngologists warn of possible problems with hearing, if the baby had certain prerequisites for this before the puncture.

There is no consensus about the age at which to pierce the ears of a child. Parents independently determine when to do it. Doctors for the most part claim that it is better not to touch the ears for up to three years because of the weakness of the baby’s immunity, because it will be difficult for a child not to injure his lobes with occasional touches of jewelry.

The only thing that all doctors agree on is the answer to the question whether ears can be pierced at home. In no case can this be done, since the piercing is a minor surgical intervention, and any such intervention should be carried out under sterile conditions so as not to infect the child and avoid complications.

There is a wide choice of methods for piercing the ears in the conditions of offices and cosmetic clinics. These are traditional punctures with needles, and more bloodless and painless, and most importantly, quick methods - punctures with a “pistol” and the American disposable System 75 instrument. To pierce a child’s ears at home with a gypsy needle dipped in vodka, with the risk of infecting wounds, as was done several decades ago, there is no point.

Modern methods are less traumatic.Since the “stud” earring, made of a special medical alloy, also acts as a needle in the process of piercing. Thus, the earring instantly appears in the eyelet and automatically fastens. Much more difficult and longer care, which is a prerequisite for a successful ending the whole idea.

How to care for pierced ears?

After the ears have been pierced, the piercing specialist usually tells parents how to care for wounds so that a correct and painless tunnel in the ear can quickly form. The process really requires concentration and mandatory control by adults. First of all it concerns the treatment of wounds.Treat the puncture site should be daily, 3-4 times a day. It is best to carry out the procedure in the morning, afternoon and evening.

Mom should carry out processing only with clean hands. Hydrogen peroxide or any other antiseptic is instilled into the wound - "Miramistin"," Chlorhexidine ". Do not treat children ears with alcohol or alcohol-containing solutions.

After instillation of the antiseptic, the earring is gently pushed back and forth if it has a handle (such earrings can be inserted into the ears pierced by the traditional manual method using a piercing needle). If the puncture was made by modern methods - “pistol” or “System 75”, then there is a “carnation” in the ear. After the instillation of the antiseptic, it is slightly moved back and forth and gently rotated clockwise.

For some time after the piercing of the ears in the child’s life some changes must occur. The girl does not need to bathe the first 5 days after the puncture. This also applies to visiting the bath, sauna, and swimming pool. In the public pool to drive a child is not necessary the first 3-4 weeks after the puncture. Pathogenic bacteria and viruses can get into the wound with water, means for chlorinating water can cause severe inflammation. The first five days is better to refrain from washing the head. During the month, do not swim in the sea and the river.

While the holes in the lobes are healing, proper hair care is important. It is desirable that the hair does not come into contact with wounds. A girl with a short haircut has nothing to worry about, but if the hair is long, it is best to keep them permanently gathered in a high hairstyle - a tail, a bun on the back of the head, a pigtail-basket. You should be very careful when combing the hair, the earring should not be touched with a comb.

Physical activity and mobile entertainment is better to leave for later. While running, jumping, playing sports, dancing increases sweating, and sweat (a rather caustic substance) causes additional inflammation in the unhealed wounds of the earlobes. If the child is small, it will be difficult enough to ensure that the baby does not touch the ears of her ears, but this should be done.

It is better not to touch medical “carnations” or change them to other earrings for at least a month and a half.

During this time, if the wounds are properly looked after, the holes no longer hurt, are covered from the inside by the epithelial layer, and you can, without special fear, change the first earrings to any others. The main thing that these other decorations were made from quality gold without nickel impuritiesso that they are not bulky and heavy and have a comfortable and reliable fastener.

Psychologically, it is quite difficult to remove for the first time medical cloves that have become customary for the first month. Mom is scared because she is afraid of not being able to insert other earrings in her ears and cause her daughter great pain. If you do everything carefully, then the child will not be hurt. And you can remove the cloves in the following way:

If you can’t do it yourself, you can go to the clinic or the room where the piercing was done, the “studs” will be removed and new earrings will be inserted into the baby. Usually, there is no additional charge for these services.

There are usually no negative consequences when a child punctured the ears if the mother did everything responsibly and correctly - she took her daughter to a good licensed clinic, punctures were made under sterile conditions with sterile instruments, and the subsequent care was correct and thorough. However, even with proper care, the child’s ears sometimes fester after a puncture. This indicates that infection has joined the wound.. A small amount of pus, which is released during processing or during the movement of the earrings in the ear, should not cause serious concerns. It is enough to lubricate this wound several times with ointment "Levomekol" or "Baneocin».

If the ears are strongly festered, the lobes look very swollen and painful on palpation, if the skin changes color and becomes purple or grayish, you should definitely show the child to the doctor. The temperature after piercing the ears sometimes rises, as people say, “on nerves”. But if the temperature did not rise immediately after returning from the cosmetologist’s office, but after a few days, against the background of decay, this also says either about joining a bacterial infectionor that child's body "does not accept" a foreign body, and immunity by all means rejects the earrings.

If the ear is inflamed, reddened, but there is no pus, this may indicate a possible allergic reaction to some component of the alloy from which the jewelry is made. Ignoring contraindications to piercing can lead to complications from a vulnerable organ or body system. If the child suffered from otitis before the manipulation, and the parents decided to puncture his ears anyway, then deterioration on the part of the hearing organs is possible. Wounds do not heal for a long time and can strongly inflame in children with diabetes mellitus, with diseases of the cardiovascular system.

Ophthalmologists say that the wrong puncture point, if it is shifted down towards the cheeks, can lead to a drop in vision and even the development of glaucoma.

The probability of complications affects the time of year. In the summer, in the heat, the child sweats more strongly, it is dusty outside, which increases the likelihood of decay and inflammation. In winter, the baby lurks another problem - the effect of cold on the pierced ears is also not the best way affects the healing of the wound. In addition, in the cold season, children wear hats, scarves and sweaters, possibly mechanical injury to the ear if the earring catches on the clothes.

Best of all, if the process of rehabilitation after the piercing falls in May or September.

How to help the child?

If complications appear, the doctor should treat the child. Unauthorized prescription of drugs, especially antibiotics, is unacceptable. All that parents can do is to treat the wound with an antiseptic without alcohol and take the daughter to an appointment with the pediatrician, who will decide whether to remove earrings and start urgent treatment, or you can help the child without removing the jewelry from the lobes.

To reduce the likelihood of the onset of negative complications will help simple security measures that all parents can take:

For information on when to pierce the ears and how to care for them, see the next video.

Hardening of preschool children
Information provided for reference purposes. Do not self-medicate. At the first symptoms of the disease, consult a doctor.