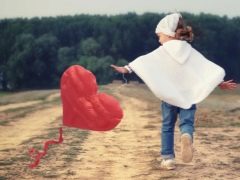 There are diagnoses in medicine that sound scary to parents in their own right, since they are not widely known, and little people know about them. One of these medical verdicts is the blockade of the right bundle of His.

Before we talk about this diagnosis, about what it is, you should clearly understand what part of the body we are talking about. The bundle of His is deployed in the heart of the child. It is an integral part of the conductive system of the heart and externally, indeed, is a bundle that consists of thin fibers of muscle tissue, but not ordinary, but somewhat modified.

In the space of the interventricular, in the area of ​​this partition, This bundle branches into two legs - one right and the other left. They branch out into a thinner net and connect to the smallest miniature branches called Purkinje fibers. The smallest fibers pass through the entire muscular wall of the body - the "motor" and are connected to the ventricular myocardium.

According to the branches from both legs, an electrical impulse passes to the small fibers, the heart contracts, beats.

The blockade of the bundle branch foot is thus called full or partial (incomplete) pathological change in the ability to conduct an electric pulse, as a result of which the ventricular myocardium inconsistently and incorrectly enters the excitation phase.

Cardiologists do not believe that the blockade of the right or left leg of the bundle of His is a separate anomaly, the overwhelming majority of which is blockage just a symptom of some heart disease, vice. Signs of this blockade are noticeable mainly on the ECG, the decoding of which shows characteristic changes in the schedule of the interventricular septum and ventricular myocardium. The discovery of such a picture is usually random, but it requires a more detailed study of the state of the child's heart — whether there are diseases or pathologies.

It is noteworthy that the incomplete blockade of the right bundle of His in 5% of cases in children is not an anomaly and is qualified by specialists as a variant of the normal, only purely individual, development of a karapuz heart.

These children have no symptoms or signs of heart disease, the examination does not show any more violations, except for an insignificant (incomplete) paradoxical anomaly in the conduction of the electrical impulses of the interventricular septum.

Usually such a problem easily "overgrown" with age. However, in the remaining 95% of cases, when these signs were found on the ECG of the child and the parents were informed about the blockade of the right bundle of His, the child showed careful cardiological examination, which will show what, in fact, to take further.

The conductivity of the electrical pulse in this part of the heart can be broken due to various and quite numerous reasons. Most often, according to cardiologists, the leg on the right side is blocked with significant loads and an increase in the size of the right ventricle of the heart.

The illnesses in which this becomes possible are numerous: this includes mitral stenosis, and congenital and acquired anomalies of the septum, functional insufficiency of the tricuspid valve.

Blocking the functions of the legs on the right side can talk about the so-called pulmonary heart, elevated blood pressure, and on the state of acute myocardial infarction.

The causes of the physiological partial blockade, which would not be interconnected with any heart ailments, are unknown to medicine.

When the blockage is complete, then the left side of the heart "is taken" for the excitation of the muscle tissue of the right ventricle. So the body tries to compensate for the violation bypass.

When the blocking is partial, there is an impulse from the leg on the right side, but it is slow, passing with a delay. This is what can be seen by a specialist on an ECG on characteristic teeth on the graph.

It should be noted that a violation of the conductivity of the electric pulse can occur at any age - and in newborns, and in 1 year, and in 6-8 years, and in adolescence. 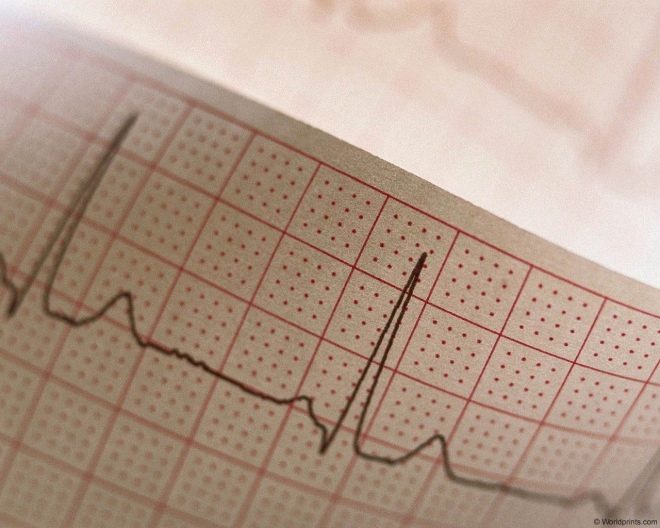 How does it manifest itself?

Much depends on how many beams are hit and “blocked”.

First of all, parents should not lose heart. The child will be assigned a detailed examination of the heart, and it must be taken.

Do not underestimate the most common electrocardiography: ECG gives a fairly accurate idea of ​​not only the fact of the blockade of the bundle of His, but also the possible causes of this unpleasant phenomenon.

There are several varieties of such research, each of which can be assigned to a child if the doctor deems it necessary:

A qualified consultation of the pediatric cardiologist will be required. Most likely, after such a “finding” on the ECG, even if the blockade is physiological, this doctor will put the child on the dispensary account. The remaining actions of parents and doctors will depend on exactly what reasons will be detected. 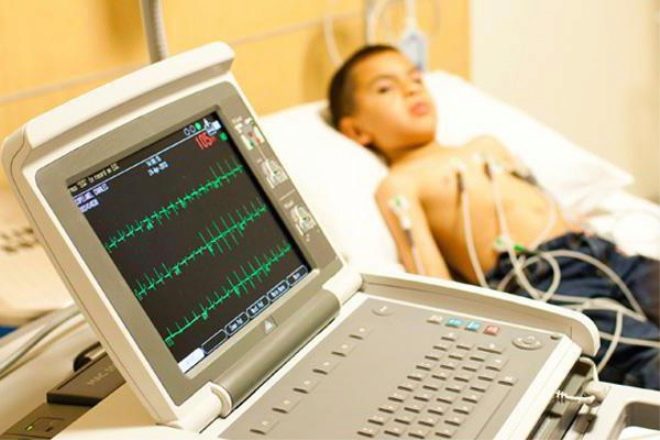 There is no special treatment for the blockade, regardless of which fibers perform poorly or do not conduct pulses - the front left leg, the rear right leg, part of the upper branch, etc. The answer to the question about treatment is possible only when the child is given a specific cardiac diagnosis.

Can be assigned treatment with medications, cardiac glycosides and nitrates, applied drugs to lower blood pressure.

With complete blockages, especially bilateral ones, it may be necessary to install at the discretion of heart surgeons. electronic pacemaker. With physiological blockade, treatment is not required, but the child will have to twice a year to visit a cardiologist, do an ECG, which is called dynamic observation. Only a specialist will be able to tell parents about what they say about changes in the cardiogram of the child and what the resulting sinus tachycardia, passing arrhythmia, etc., can mean.

Full blockade of the right leg of his is dangerous, because at any time the underlying heart disease can lead to complications. With incomplete predictions more favorable.

Separately, I want to say about how to live with such a "cardio-walker". If the child has no symptoms or signs of heart disease, and the blockade is incomplete, he doesn’t suffer in any way, he can continue to live his usual life with the level of physical exertion he was used to earlier.

However, with the identification of cardiac pathology, much in life changes. Parents should do their best to to protect the child from strong stress, experiences, he must comply with the mode of moderate exercise, recommended individually by a cardiologist, rest more, be sure to follow the rules of healthy and rational nutrition.

If the child is given a stimulant, there will be more restrictions: you can not come close to working electrical devices with the side of the implantation zone, you can not lean against them, you can not talk on a mobile phone, pressing it to the ear from the opposite side (in this case, the left).

More information about the blockade of the right leg of the bundle of His is described in the video below.

Causes and treatment of enuresis - urinary incontinence in children

Nocturnal enuresis in children
Information provided for reference purposes. Do not self-medicate. At the first symptoms of the disease, consult a doctor.