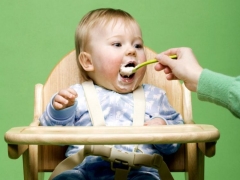 Oatmeal is very popular with many adults and is considered a healthy food. And when the time comes to feeding on cereals, mothers are interested in how old you can give oatmeal to a baby and how to cook such a dish correctly for a small child.

The benefits of oatmeal

When can I give to children?

Acquaintance with cereals containing gluten, which include oatmeal, are advised to start no earlier than 8 months. Before that, the baby should be acquainted with gluten-free cereals - rice, buckwheat, corn. These kinds of cereals can be given from 6-7 months. With the propensity for allergy oatmeal should be offered to the child only after a year.

Oatmeal porridge for a child can be dairy-free if it is boiled in water or diluted with clean water, as well as milky, if milk is used in its preparation. When cooking milk porridge for children 10-11 months cow's milk diluted with water by 2-3 times until the baby is one year old. A one-year-old child can boil the porridge in whole milk, if the crumb tolerates this dairy product well.

How to enter into the diet?

Like any new product, baby oatmeal should be given for the first time in an amount of not more than one spoon. With normal tolerance, the volume of the dish is gradually increased to the age required. First, oatmeal is given in the form of a single-component dish, and when the child becomes fully accustomed to it, such cereal can be mixed with other cereals, fruits, and even with vegetables.

Oatmeal, which is given to a child of the first year of life, can be not only cooked independently, but also out of the box (industrial production). To dissolve the finished gruel for a baby who tries it for the first time, usually use breast milk or infant formula. If the child is going to be given milk porridge out of the box, purified water is also used for its cultivation, which is allowed for baby food.

How to cook on water?

To cook the first oatmeal porridge at home from oatmeal, it should be crushed into flour. In a boil 100 ml of water pour out a teaspoon of such flour and stir constantly for 20-30 minutes. In the cooled dish add 15-30 ml of the baby’s usual mixture or mother’s milk.

How to cook on milk?

Milk for cooking oatmeal begin to use from 7-8 months of age. First, the child cooks porridge from cereals, which is crushed into flour, and from year to year you can use flakes and whole grains.

Here is a recipe suitable for cooking oatmeal for a child older than a year:

Also, milk porridge from oatmeal is very convenient to cook in a slow cooker, because with this preparation there is no need to constantly stir the dish and make sure that the porridge does not “run away”.

How to choose oatmeal for baby food?

When buying cereal, cereal or instant porridge for a child, pay attention to the shelf life of the product and the integrity of the package. Opening the pack, look at the look of the oatmeal and its smell. A quality product will be yellowish or creamy, and there will be no unpleasant smell.

What if the child eats raw oatmeal?

Some kids like to eat raw oatmeal. It is not dangerous and does not harm children's health, but may indicate a deficiency of B vitamins or reduced hemoglobin. Therefore, if your child is constantly asking for raw oatmeal, take a referral from a doctor for a blood test.

You will learn more about the properties of oatmeal by watching the “Live Healthy” program.

Find out what is more useful - buckwheat, oatmeal and rice, you can from the next transfer.

At what age can an omelet be given to a child?

Is it possible to give oregano to children?

At what age can you give the child beets and beet juice?

At what age can mint be given to children?

At what age can you give the child a sweet cherry?

Is it possible to give a child quail eggs, how to boil them and from what age to put in complementary foods?

How old can you give blueberries to your child?

At what age can jelly be given to a child?
Information provided for reference purposes. Do not self-medicate. At the first symptoms of the disease, consult a doctor.