At what age can you give the child vermicelli and how to cook soup with her? 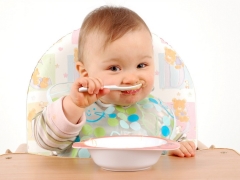 Vermicelli and pasta are often found in the menu of many Russian families, because of them you can quickly and easily prepare a delicious lunch or dinner. And so young mothers are interested in how many months you can give a vermicelli to a child and how to choose the right pasta for the children's menu.

From what age to give children vermicelli

Manufacturers of products for children offer modern mothers pasta allowed for baby food. Such noodles after cooking are very soft, so it is easy for a child to chew and swallow it. These pasta can be tasted from 8-10 months of age, and it is recommended to cook soup with such noodles for the children's menu a little later - from 10-12 months.

As for pasta, which is intended for adults, they should be introduced into the diet of the crumbs not earlier than 1 year. To treat a child with vermicelli soup, which is prepared for all family members, is from 2 years of age (provided that spices and other products that are not allowed for children under 3 years old are not added to the dish).

In addition, from 2 years of age, pasta can be given to a child with fruit jam, honey, cheese, boiled meat and other additives. Many kids love sausages with noodles, so this dish can also be treated to a child over 2 years old, choosing low-fat sausages allowed for baby food.

Some manufacturers offer colored pasta, in which natural dyes are added for red, yellow or green. They are safe for babies and can be included in the diet of children along with traditional noodles.

How to put in a lure

Vermicelli and other pasta are a nutritious product, therefore, it is not recommended to give them as a side dish in the first years of life. Let the noodles be for the crumbs an independent dish that can be offered both for lunch and in the evening. After boiling the pasta according to the tips on the package, add the vegetable or butter to it, and then serve on the table.

For the first time, give the child 1-2 tablespoons of vermicelli to notice the reaction of the baby's digestive tract to new foods. If the kid has eaten everything with pleasure, and his intestines have not reacted to the pasta with negative symptoms, you can increase the portion by offering noodles no more than 2-3 times a week.

When not to give the child vermicelli

Noodles are limited in such situations:

Also, pasta should be abandoned in case of intolerance to flour products (gluten allergy). In addition, babies should not be given instant noodles, because in such a product most of the useful compounds are lost during their manufacture.

How to cook noodle soup

To make baby soup with the addition of vermicelli, follow these tips:

The preparation of such a soup begins with boiling until the vermicelli is cooked, after which the pasta is poured with boiled milk. For this dish, you can use special baby milk (powdered) or whole milk, but for children under 2 years old, milk is recommended to be diluted twice with clean water.

Cook the milky vermicelli soup in a thick-walled pot. Before cooking, rinse the pot with cold water, then the milk will not burn. Boil the soup on low heat and stir often.

Here is one of the recipes for milk soup with the addition of pasta:

It is a very tasty, nutritious and nourishing soup, which can include not only chicken and noodles, but also various vegetables, such as potatoes, onions and carrots.

For a child under three years old, such soup is cooked with chicken meatballs or is added to it separately cooked. chicken meat. Children over 3 years old can make chicken broth soup using whole homemade chicken to make it.

Add ingredients to the noodle chicken soup, taking into account the time it takes to bring them to full readiness. Vermicelli and boiled chicken meat is added to boiling water 5-7 minutes before the end of cooking. If there are vegetables in the recipe, they are peeled, diced and boiled for 10-20 minutes. Greens are added to the table in chicken vermicelli soup for the child.

An example of decorating a dish with noodles and sausages, you can see in the next video. If you buy sausages, take necessarily children's ones.

The recipe of potato soup with noodles you can see in the next video.

At what age can you give soup to a child and what recipes are suitable for a one-year-old baby?

At what age can you give eggs to a child?

What if the child does not drink water?

At what age can you give bread to a child?

At what age can jelly be given to a child?

At what age can you give the child an orange and juice from it?

From what age can you give cranberries to children?

At what age can you give chicken liver to a child?

At what age can you give a child a pumpkin, how to cook pumpkin soup and mashed potatoes?
Information provided for reference purposes. Do not self-medicate. At the first symptoms of the disease, consult a doctor.