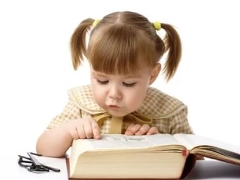 On sale you will be able to meet a huge number of manuals for learning to read various authors. However, not all of them are a good textbook, and not even all are approved by the Ministry of Education. Books Olesya Zhukova can be attributed to the category of excellent textbooks that help you in the development of your baby.

From the biography of Olesya Zhukova Stanislavovna

O. Zhukova is the developer of a number of important areas of scientific and practical work. She created a unique method of pedagogical rehabilitation of children after cochlear implantation, developed methodological techniques for working with young children with severe speech disorders and mental retardation.

Olesya Stanislavovna is one of the leading domestic authors who develop manuals for the development of children. O. Zhukova is a practicing author who writes about what happened in her teaching practice. This means that the methods created by her are based on real practical 20-year activity, and not only on theory.

Olesya Zhukova offers many benefits so that you can raise an intelligent child. Her book series “School of Olesya Zhukova” has repeatedly been included in the lists of the most popular and best-selling literature on the development of children.

Olesya Stanislavovna developed her own method of fast learning to read, which is suitable for young children. This method is presented in the well-known to parents and teachers working with children of preschool age, "Bukvare for future honors pupils".

O. Zhukova regularly takes part in the work of international book fairs. It is there that she holds presentations of her new products, which can be found on the websites of AST, OLMA Media Group, in the OZON online store. There you can also find the series of her books “Olesya Zhukova School” and “Olesya Zhukova recommends”. Currently, her work has spread over 5 million copies. Of these, the circulation of only one "Primer" - more than 250,000 books.

This manual is suitable for classes with children at home, as well as in children's educational institutions. As a means of additional classes, it can be used even for elementary school teachers.

Olesya Zhukova’s experience in teaching children to read from an early age showed excellent results. It became clear that even a baby, which is just beginning to speak, can begin to train. In this "Bukvare" O. Zhukov based on the traditional method of teaching reading and diversified its original author's solutions.

"Primer" is designed for children aged 3 to 6 years. The level of the proposed tasks gradually increases, according to the age of the child. The book has many vivid illustrations that are relevant to the subject. This will help to interest the baby in training. For kids here are entertaining stories, with which they will train their reading skills.

An important advantage of this "Primer" is the high quality of the paper used. For children it is necessary that everything is safe and resistant to damage. For kids who are just starting to learn to read, a good large font is needed. This is exactly what is presented in this tutorial.

Almost all reviews have a high positive rating. Parents note excellently described effective methodology, with tips for parents. Thanks to the instructions at the bottom of the page, even an adult far from pedagogy will simply cope with teaching the child to read. Also, many talk about good colorful design, interesting pictures that do not distract the kid, and high-quality printing.

Parents of the crumbs are very pleased that the children are interested in doing this booklet. They note that with the help of this book, the guys quickly learned and loved reading.

Among the shortcomings, some parents noted that the transition to reading words and sentences was too fast. Some were not enough time for learning to read syllables.

This "ABC" is recommended for kids aged 2 to 5 years. She is a good helper to parents and teachers who teach children to read. The manual will be understandable and accessible to understand your baby. With its help, you will learn the alphabet and look at interesting pictures corresponding to each letter. In addition, the "ABC" provides an opportunity to acquaint the crumbs with the names of various public places, verbs. In addition to learning the letters, children are introduced to the sounds and folding of syllables.

Classes in the "ABC" O. Zhukova can be carried out in the form of educational games, which will make the learning process fun and interesting. The proposed tasks (putting a letter from pasta, groats, beads, stones) imperceptibly draw the child into the game, helping him to get acquainted and remember the graphic designation of the letter, learn how to put syllables with it and read simple words. In addition, such tasks contribute to the development of fine motor skills.

Throughout the period of training in the "ABC" the child is accompanied by fantastic characters - a boy and a cat. They can be found on every page. Cheerful plots are played with them, which helps to instill a love of reading.

In general, the feedback on this manual O. Zhukova positive. Parents say that with its help, children are very early and quickly learned to read. They did it with pleasure. They were fascinated by this bright colorful book. The letters in it are large, just suitable for children who are just starting to learn to read. The words are already underlined. In addition to the basic function of acquaintance with letters and learning to read, the ABC offers tasks for the development of children.With the help of this book, crumbs easily remember the names of institutions of the social sphere, actions, various subjects.

Also, adults say that the manual is understandable to even very young children. Many people liked that the book additionally offers cards for cutting. Being engaged in them, the child will be able not only to learn letters and syllables, but also various classifications, such as transport, plants, objects, etc. Parents praise the artist for completing the illustrations for the book. According to them, they turned out just wonderful, perfectly reflecting the essence of the written text.

Of the minuses, many noted that the material intended for reading is present at the beginning of the book, although it will be used only after the child learns to read. The manual begins with difficult questions for kids, pictures that are not related to the text. Acquaintance with the letters occurs only in the second part of the "ABC". Also, many parents found it unsuccessful selection of words to a particular letter. For example, the letter A is illustrated by AIST, AYSBERG, which is still very difficult for kids to understand and remember. To memorize the letter T, the word NOTA was chosen, where T is found only in the middle of the word, for the letter B - BABA, D - DAMA, that the crumbs are not yet clear.

This book differs from others in the sequence of acquaintance with the letters (sounds), which by pronunciation goes from simple to complex. The indicated age of children for learning is preschoolers, however, it may well be used for crumbs who are just beginning to speak their first words. The manual will assist in teaching children who have problems with speech. The process of comparing sound with a letter, which is difficult for a child, becomes much easier, because he is provided with visual and motor assistance by cheerful characters.

Reviews of "Speech therapist" you can see only positive.

Parents who started teaching their children on this manual, comparing with the other “Primers” of the author, say that more time is spent on acquaintance with the letter. Many people like a large number of recommendations on the study of the letter, its correct pronunciation, presented on each page. Parents positively celebrate their interesting presentation.

Also in the merits of this "Primer" emit colorfulness, ease of use, high quality materials. Adults like to observe the interest with which children are engaged in this book.

"Alphabet for crumbs and crumbs"

For parents and educators who want to learn letters with children as early as possible, this handbook will be invaluable. The first reading lessons will be entertaining games for the crumbs, which they will love very much. Vivid, colorful illustrations of the book will contribute to this. Looking at them, kids will be happy to repeat your new words and sentences. One of the author’s main wishes for parents is the desire for the book to help children grow up smart and talented, and learning only brings them joy and pleasure.

You can find quite mixed reviews about this manual.

Among the advantages of the ABC, parents distinguish a different level of tasks during their acquaintance with each letter, from simple (circle a letter with a finger) to difficult for a child (reading lines of letters and searching for a letter in words). As parents note, different senses are involved in studying the letters in this “Alphabet”: tactile, auditory, and visual, which helps the crumbs to better assimilate the information received, to develop fine motor skills.

Also note beautiful, good pictures.For children who love to consider colorful illustrations, this book will be ideal for unobtrusive acquaintance with the alphabet.

A big drawback of the “Alphabet for Crumbs and Crumbs”, many parents called the quality of the product. She has a soft cover from which pages fly out when opening a book. Also among the shortcomings called the alphabetical order of learning letters. Children confuse voiced and deaf consonants and hardly remember them. The manual is designed for children from a year, but most say that at this age it is too early to start teaching a child to read. Mechanical memorization at this age definitely will not be useful for the child.

Comparison of primers Nadezhda Zhukova and Olesya Zhukova you can see in the next video.

How to teach a child to read quickly and correctly?

How to teach a child to read quickly and correctly in grade 1: exercises and developmental activities

Learning to read according to the method of Nadezhda Zhukova

How to quickly teach a child to read?
Information provided for reference purposes. Do not self-medicate. At the first symptoms of the disease, consult a doctor.