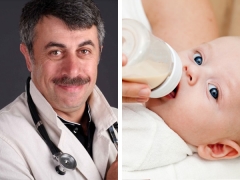 The best food for a newborn is mom's breast milk. And no nanotechnology and the latest advanced development of modern science is not able to make the mixture as close as possible to the composition of natural milk, which only mom can give a crumbs.

However, breastfeeding is not always possible. Unfortunately, there are reasons that prevent normal breastfeeding. This may be a serious illness of the mother, which requires treatment with strong antibiotics, anticancer drugs, and the banal lack of mother's milk, or the complete absence of it. When the prospect of artificial feeding becomes a reality, parents have many questions that are answered with pleasure by the authoritative doctor and the favorite of millions of mothers, Yevgeny Olegovich Komarovsky.

More on artificial feeding will tell Dr. Komarovsky in the next video.

It is impossible to replace breast milk with any, even the most expensive "premium" mixture. Its value is not only in vitamins and enzymes, but also in immunoglobulins. Mom's milk gives the child the same immune protection, thanks to which the crumb is quite reliably protected from most viruses in the first six months of its life, until its own immune system begins to actively form. 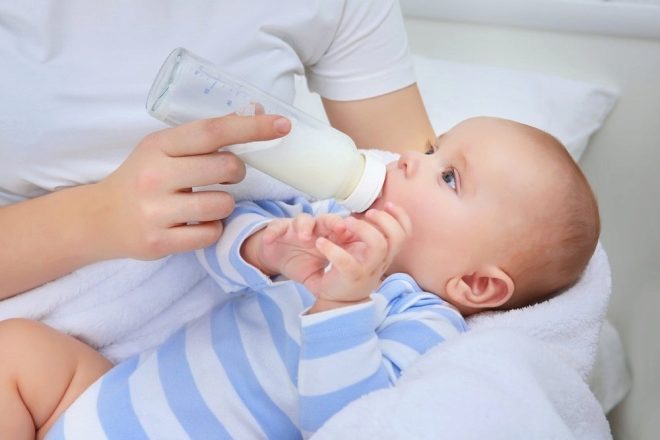 This does not mean at all that children of artificial children are completely deprived of their mother's immunity. They still have innate immunity, which was formed during of pregnancy, and with the right care, he, too, will be able to protect the child, not as effectively as with breastfeeding, but something is better than nothing.

Evgeny Komarovsky notes that artificial feeding should be carried out only with the use of adapted milk formulas. They can not be replaced either by cow or goat milk.

Even 30 years ago, the doctor says, the problems of children-artificials were much more, because there was no alternative. Now choose as a food for babies goat milk, according to the doctor, is barbarism and a sign of parental irresponsibility.

Yevgeny O. advises not to listen to grandmothers, who remember how great-grandmother fed the "seven cow's milk" and called the mixture "chemistry" and "poison." Until the year, the doctor does not recommend giving milk to children at all, and up to three - with caution. The reason is that the amount calcium and phosphorus in cow's milk is so high that children's kidneys are not able to excrete such compounds. It is fraught with serious diseases, allergies to cow protein and problems with the bone system.

If the child eats mixtures, the mother needs to be more attentive to the quantity and quality of the crumbs eaten. Bottles and nipples must be clean, and the mixture should be diluted strictly in the proportions indicated on the package. 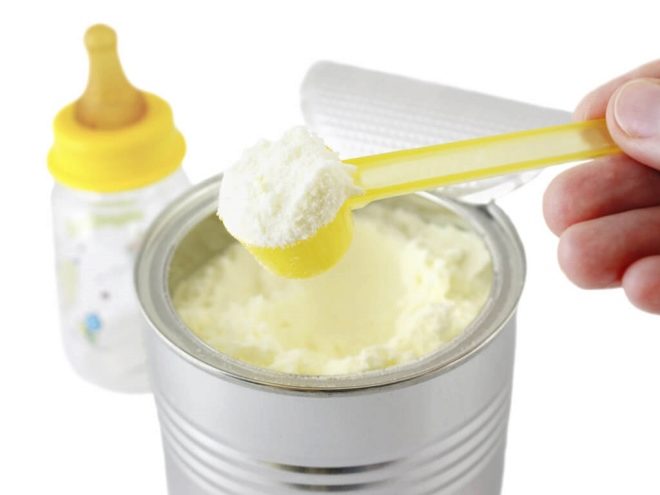 If a baby is gaining weight well, and the artifacts usually even add very well, then there is no need to feed up to six months, Komarovsky said. From six months, you need to enter additional food, according to the schedule of complementary foods. Pediatricians in the overwhelming majority advise moms to start complementary foods with vegetable and fruit juices and mashed potatoes, but Yevgeny Komarovsky recommends starting with kefir and porridge, and the fruit, even in a state of mashed potatoes, should be left until better times, when the first tooth cuts through the child.

It is his appearance that Evgeny Olegovich calls a sure sign that a small organism is ready for solid food, which in nature are all fruits and vegetables.

Dr. Komarovsky will tell you in the video below how to make the first feeding and how to feed the baby.

A frequent problem is excessive weight gain when feeding mixtures. When breastfeeding the baby food is more difficult, he quickly feels satiety and does not overeat. And from the bottle sucks more fun, but because the crumb almost always eats 20-30 extra grams of the mixture. If the pediatrician at the next examination after weighing sadly sighs, looking at the chubby peanut, the mother can reduce the concentration of the mixture, adding a little less dry matter to the water than provided by the formulation and recommended by the manufacturers.

There is an opinion that children who eat mixtures are more likely to suffer from dermatitis and allergies. There is a grain of logic here, but it is impossible to assert that this is a pattern. If a child has an inadequate reaction to a particular mixture, you can replace the mixture itself.. But doing this too often and without the knowledge of the pediatrician Komarovsky does not recommend. 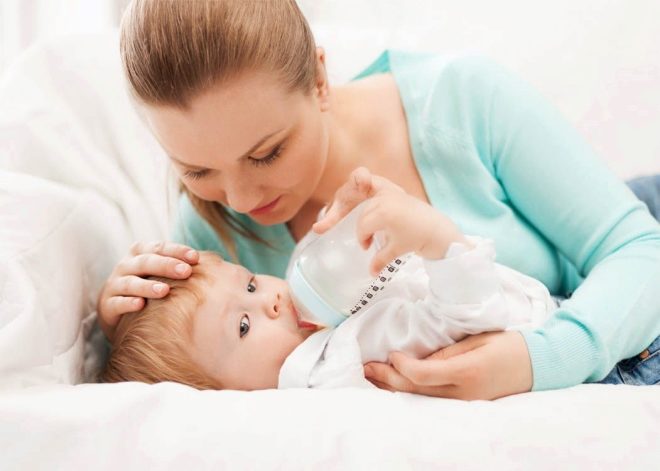 Dr. Komarovsky about the regime of the day in a child

Dr. Komarovsky about the correct and rapid cessation of lactation

Dr. Komarovsky about when you can pierce the ears of a child

Doctor Komarovsky about swaddling and how to wean him

Dr. Komarovsky on how to teach a child to sleep in his crib

Dr. Komarovsky about neurological problems in children
Information provided for reference purposes. Do not self-medicate. At the first symptoms of the disease, consult a doctor.