How to teach a child to the pot according to Komarovsky? 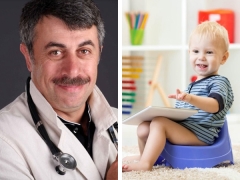 Mastering the pot by kids is one of the most burning topics for almost all parents. Everyone wants the child to learn to use this subject quickly and easily, but opinions about the age when to start teaching the crumbs how to use the potty, as well as about the very process of schooling, are very different. Let's find out what a popular doctor Evgeny Komarovsky says about such an important topic, how he relates to early schooling and what he advises to pay attention to parents, who are passing along with the crumb from diaper to independent toilet visits.

The well-known pediatrician reminds that a newly born baby does not know how to control either a bowel movement or urination. These processes are controlled by unconditioned reflexes, and it is over time that parents must make them conditional. For the success of this task, according to Komarovsky, the following factors should be taken into account:

Assessing such factors, a popular doctor concludes that an earlier start of schooling is associated with making great efforts on the part of adults. At the same time, the better the child is physiologically developed, the faster and more painlessly he will master the pot.

Early training or development of a reflex?

According to Komarovsky, a large number of parents, differing in activity and a lot of patience, are able to achieve some success in mastering pottery science by the child before the end of the first year of life. A popular doctor does not see anything surprising in the fact that babies of nine, eight and even seven months learn to urinate and walk on large things after what they heard from the lips of a mom or dad "wee-wee" and "ah-ah."

Thanks to the repeated repetition of such sounds, parents form a conditioned reflex in children, but Komarovsky emphasizes that such a reflex is not exactly what every adult wants from a child mastering the pot.

The reflex looks like “the words of the parents are a filled bladder - a pot,” and it would be more correct to have a “filled bladder - a pot”. This means that a physiological phenomenon (full bladder), and not verbal stimuli on the part of an adult, should stimulate urination.

Komarovsky notes that in most cases of such early schooling in the second year of life, urination problems appear. A child who has already mastered the pot a long time ago and successfully walks on it, suddenly for an unclear reason to the parents, categorically refuses to do so. Relatives are perplexed, but the thing is that the baby is just beginning to form a natural control of the excretory system, and he does not want to associate his physiological needs with his pee-pees anymore.

Komarovsky does not see anything wrong or shameful in acquainting a child with a pot from an early age, as well as in saving diapers. He simply notes that all successes in mastering pot science to a certain age are temporary and are accompanied by a large number of missteps.

At what age can a baby control urination?

Komarovsky emphasizes parental attention to the fact that the control of the excretory functions of the children's brain appears approximately at the age of 2.5-3 years. The doctor does not deny that some luck in urination control is possible much earlier, but most parents should expect sustained success in “communicating” with the pot not earlier than the age of two.

In the potty schooling, Komarovsky advises parents to focus on the following physiological norms:

On the basis of such norms, the famous pediatrician emphasizes that the age for familiarizing children with the pot is from 1 to 3 years.

For information on when to teach a child to the pot, see the transfer of Dr. Komarovsky.

Signs of a child's readiness for potty training

To make it easier for a child to master a pot, Komarovsky advises, prior to the beginning of the learning process, to note signs of his child confirming his readiness to acquire this skill from both the physiological and psychological points of view:

How to teach: basic principles

Not only the child should be ready for schooling, but also adults who surround it. They should understand that to communicate with the baby during the transition from diapers to the toilet will have much more. Develop new skills only in the evening or on weekends will not work.

Begin to teach the baby to go to the pot should be in an environment where the whole family is healthy and everyone has a good mood. Komarovsky calls the best period summer, because the clothes on the child are smaller and the washed clothes dry much faster.

You should get acquainted with the pot in moments when the probability of successful urination into it is particularly high. Such moments are the period after meals and after sleep, as well as when an adult observes special behavioral changes that indicate the child’s desire to urinate.

If the attempt to master the pot was successful, the baby should be praised very violently, and in case of failure it is important not to be upset or at least not to show your negative emotions to the baby.

The child’s attention should be fixed not only on the pot, but also on all manipulations before urination, as well as after it.The kid should see how you take out the pot and how to open it, understand how to remove the panties and put them back, find out where the contents of the pot are poured, how it is washed, how it closes and where it goes before the next “meeting”. Of all these actions, it is worth making the game, while trying to ensure that the process is associated with positive emotions.

When the baby is already successfully using the pot at will, we proceed to organizing "meetings" and taking into account the daily routine, for example, we seat the child before a walk, as well as before going to bed before going to bed.

You should not immediately give up diapers after the first successes of mastering the pot. Keep a few at home in case of a long trip or walk.

Also, at first you can leave the baby to sleep in a diaper at night and even in daytime sleep. If the baby woke up dry, we immediately plant him on the pot and draw his attention to the dryness of the diaper, while praising.

It does not matter at all what form the pot will have, what color it will be and whether there will be any “gadgets” in it. Komarovsky only notes that the child should not take the pot as a toy, so play with the pot should not be encouraged when it is not used for its intended purpose.

Important factors when choosing a pot are the popular doctor who calls the quality and environmental friendliness of the material from which the pot is made, the convenience of the product (preferably the model with the back), as well as the size.

Another non-fundamental point Komarovsky calls the question - is it better to accustom you to the pot or to use the toilet bowl with a child seat right away? The famous pediatrician only emphasizes that at first the use of the pot is more convenient.

See also the transfer of Dr. Komarovsky about teaching the child to the pot.

Dr. Komarovsky on how to teach a child to chew, swallow, and self-eat with a spoon

Dr. Komarovsky about why a child walks on socks

Dr. Komarovsky about children's hair and whether it is necessary to cut a child a year bald

Dr. Komarovsky about what to do if the child does not speak at 3 years

Dr. Komarovsky on how to put the baby to sleep

Dr. Komarovsky about the benefits of the salt cave

Dr. Komarovsky on the treatment of atopic dermatitis in children
Information provided for reference purposes. Do not self-medicate. At the first symptoms of the disease, consult a doctor.