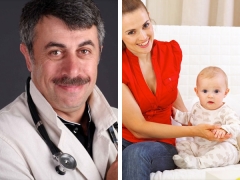 The first skills of the baby touches and delights the parents: he smiled, he turned, he sat down, and he crawled. However, not always development the crumbs follow this scenario - there are quite a few children who begin to sit down at 4 months, and there are such tots who do not sit on their own and at 8 months, but they crawl perfectly.

Parents of children who do not want to sit at the right time (according to generally accepted medical standards), try to help the crumbs and teach them this on their own. Do I need to do this, says Yevgeny Komarovsky.

According to the existing medical standards by which pediatricians estimate the development of babies, most of the toddlers begin to sit in 6-7 months. However, these figures are so conditional, says Yevgeny Komarovsky, that they can not be taken into account. All children are different, they develop according to their individual scheme, and each has its own standards.

A child who does not sit at 7 months, does not suffer from this.

But his parents are suffering and complaining, who want their children to keep up with their neighbors' children in their development.

The very wording “he must sit at a certain age” is incorrect. According to Komarovsky, no child in the world owes anything to anyone. He will sit down, crawl and go when his spine and back muscles are ready to take on such a load.

What should parents do?

First, visit the doctor. If something in the development of the crumbs causes or confuses, this is the first thing they have to do. The child needs to be shown to an orthopedist, a pediatric surgeon and a neurologist. If these three specialists do not reveal any diseases of the nervous system, musculoskeletal system and other disturbing causes in the baby, then nothing else needs to be done.

Such a baby will definitely sit down, says Yevgeny Komarovsky, but only when the time comes.

And this process will happen by itself, without any involvement from mom and dad. 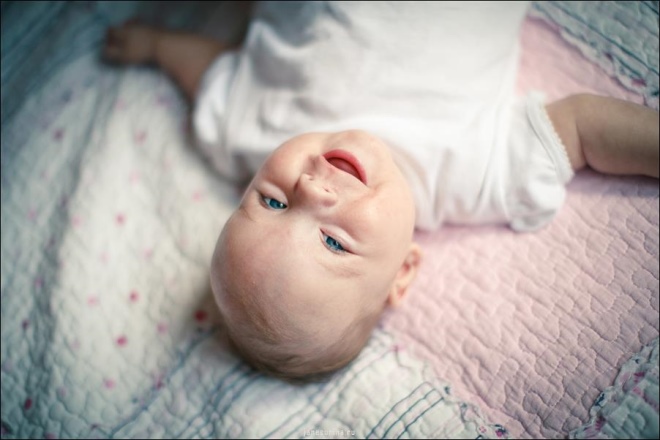 What can not be done?

It is impossible to sit down children too early, because sitting a child, according to the doctor, is generally not useful. The later the baby does it, the straighter his back, straighter legs and arms, more correct posture. Early sitting creates a strong load on the spine, which is weak and not ready for it, from which later the grown-up children have numerous health problems. 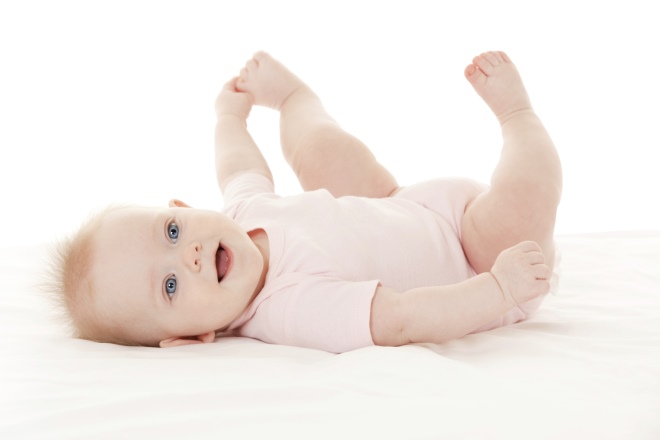 The best thing a mom and dad of a baby can do is not to help him in sitting, standing and taking the first steps.

Often parents who find their baby trying to sit down immediately send the baby to the sofa, put pillows on and sit in a sitting position and are happy that their child is developing the fastest. It is more correct to develop not sitting, but crawling, because it is during this process that the muscles and bone skeleton of the baby are strengthened and prepared for sitting and walking.

Another mistake that modern parents often make - jumpers. The child, who still does not know how to sit, they are suspended in a vertical position so that he jumps. It seems to adults that it strengthens the locomotor system. In fact, early verticalization can be very dangerous for the crumbs. Jumpers and walkers are not the most successful acquisitions, and it is better to keep them away in the closet.

How to train muscles

Yevgeny Komarovsky advises children from 5 months not to sit down, but to spread on the stomach on the floor, on a spread blanket or blanket. In a couple of meters from him put bright toys, and in every possible way to stimulate movement in a bellies or in any other way (on the stomach, with support on one leg and arm, whatever you like).

Excellent training for all the necessary muscles for sitting - this evening firming massageas well as swimming. Water treatments can work wonders. Nobody cancels and daily gymnastics, which is desirable to begin to do immediately upon arrival from the hospital.

Nevertheless, when the crumb begins to sit, it will become clear which muscles are the weakest: if he sits with a round back, then we can talk about weakness of the spinal muscles and neck muscles, if he falls back - the press is weak, and if you collapse on the side - lateral muscles need support.

Carefully look at the child, take on his "weak points" on arms and train. 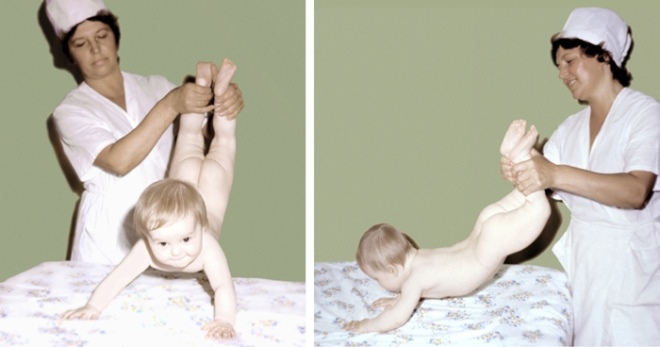 How to hold a child upright

A child who is not yet sitting on his own should also be held correctly, because the vertical position, as mentioned above, can harm them. Evgeny Komarovsky advises necessarily supporting the baby with one hand under the ass, the other - tightly bow under the arms.

If at the same time the adult himself is sitting, and the crumb is sitting on his knees, then it is important for the adult to assume a half-sitting position. This will reduce the load on the vertebrae of the child.

Teaching a child to sit down is not a good idea for mom. It is better to teach a child to walk, harden and swim a lot.

If a child is not sitting 9 months, as well as 10 and 11 months of age, then there is no crime in this either, says Komarovsky. Up to a year, you should not touch the baby at all and encourage him to do something that he himself does not want, but what his caring and worried parents really want.

If the baby is just beginning to sit, pay attention to the posture in which he does it.

If the child is sitting with his legs folded upside down in the letter w, such a position does not promise anything useful, since the hip joint is turned inside out. It is better to gently correct his posture, having learned to sit correctly.

You will learn more about child development rules in the following video.

Dr. Komarovsky on how to teach a baby to crawl

Dr. Komarovsky on the development of newborns and infants for months

Dr. Komarovsky about walking with a newborn in winter

Dr. Komarovsky: what to do if the baby fell out of bed?

Dr. Komarovsky about how old a child needs a pillow
Information provided for reference purposes. Do not self-medicate. At the first symptoms of the disease, consult a doctor.