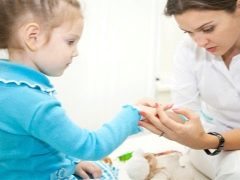 Urticaria or urticaria fever is extremely widespread in children. But the peculiarity of children's skin is such that different rashes can appear on it for a variety of reasons, and therefore the question remains for parents of children how to recognize a rash, how to distinguish it from prickly heat, diaper rash, infectious diseases.

Often the urticaria is considered only a symptom, but this opinion is erroneous. The problem is derived in a separate disease, and basically it has an allergic nature. The name of such a rash was due to the external similarity with nettle burns. Naturally, it is not a burn, and belongs to the group of dermatitis.

It develops due to an excess of released histamine, which injures the walls of small capillaries, for this reason, the liquid medium from the cells goes into the upper layers of the skin. Thus, there are nettle blisters, which are noticeably itchy. But the main threat of nettle fever lies not in a rash, and in a possible edematous form, in the development of angioedema, which affects up to 40% of children affected by urticaria.

If the child does not provide the right help in time, he may suffocate from swelling and closing of the glottis. That is why it is important to be able to distinguish hives from other problems, because the first actions should be taken by parents.

Most common is nettle fever. in children up to 7 years. After the child reaches this age, the frequency of the disease rapidly decreases, because immunity is growing over the years.

Causes of urticaria are considered to be contact with allergens, food and drug allergies, and there are cold and aqua forms.

A rash that is so similar to nettle burns is called an urtikarnoy. The main difference between the urticaria and all other types of rash is its rapid development. It, in the literal sense of the word, is formed suddenly. If many other types of rash appear gradually, with several elements on the body and gradually increase, spread, the nettle rash is usually always numerous and extensive at once. Her color is rich pink. When cold form - light.

The initial stage is characterized by a large number of formations on the skin. After an hour, their number, if increased, is insignificant. This "behavior" of the nettle rash can be explained by the concentration of histamine in the blood. While it is a lot of it, the rash is there, but after an hour it decreases, and new elements are not formed.

Therefore, take a close look at your child and understand one important detail: if there are several bubbles, and then several more, then it is probably not an urticaria at all, but an infection. This is how chickenpox and many other viral diseases begin.

It is important to evaluate other symptoms. When urticaria, the temperature rises only if the rash is very extensive, covers more than half of the body, the rise is insignificant - up to 37.0 degrees with a small one. In infectious diseases, the temperature is usually high, there are signs of respiratory lesions and other complaints.

The nettle rash not only forms suddenly, but disappears suddenly. As soon as histamine in the child’s blood becomes less, the rash begins to disappear, leaving no marks on the skin after myself. Usually within a few hours the rash becomes pale, and then disappears.Urticaria returns only if the child's urticaria is chronic, and its symptoms recur with an enviable frequency for several months.

Does Rash Hurt? Not much, but quite noticeably itchy and itchy. And this, too, needs attention. It looks like small elements elevated above the skin, prone to merging into wider ones, there is swelling around each. If the rash struck a small area of ​​the body, then it usually does not affect the general condition of the child. But extensive rashes, especially edematous, certainly affect the general state of health - the child becomes sluggish, capricious, all the time trying to scratch the rash, may develop difficulty breathing (with swelling of the respiratory tract).

Since there are several types of urticaria, and its symptoms may have their own characteristics. Attentive parents by the nature of the rash can try to determine not only nettle or not, but also the possible reasons for its occurrence.

Urticaria in chronic manifestation is often accompanied by indigestion. Apart from the fact that the urticarial rash appears frequently, the exacerbation is also marked by the occurrence of diarrhea or constipation. Often the site of a chronic infection is the inflamed tonsils, or there are problems with the bile ducts, frequent stomatitis, caries - also accompany chronic urticaria. Remission is the period between episodes of the formation of a characteristic rash.

During the period of exacerbation, the child becomes nervous, complains of headache, nausea, abdominal pain. Treatment should be aimed at preventing recurrent attacks, to reduce the likelihood of their burdened course, for example, the development of edema of the membranes of the brain.

Urticaria rash in children of the first year of life is called strophulus. Most often at this age food causes it. The probability of development of urticaria is higher in children who are bottle-fed. The most dangerous moments are the periods of introducing new baby food.

Most often, the characteristic rash appears in the folds of the skin, on the face, neck. Almost always, strophulus is accompanied by loose stools or constipation, anorexia.

It is easy to recognize a giant or swollen urticaria. It is accompanied by sudden edema. They can be on the arms, legs, neck, face. The higher to the head, the more dangerous, because angioedema, for example, affects the larynx.

Swelling is in the direction of the location of the muscles. Swelling may persist for quite some time. With Quinck’s edema, it is difficult for the child to breathe, breathing is difficult, cyanosis (blue) of the lips appears.

Everything depends on the actions of the parents: you need to call an ambulance, give a dose of an antihistamine drug (age), take the child to fresh air to ease breathing before the doctors arrive.

Temperature or cold urticaria is usually a reaction of the body to cold or sun. The rash appears in places that have been exposed to temperature - on the face, hands. If you are allergic to UV rays, then the urticarial rash can be quite extensive. Usually intolerance of sunlight develops in children with a specific genotype: light skin, blond hair and eyes.

With such a urticaria rashes may develop in response to temperature differencesFor example, if a child was brought from a cold to a hot, heated bath or vice versa.

It is noteworthy that the rash itself does not appear immediately, but several hours after exposure to UV rays or low temperature.

When edematous form immediately call an ambulance. In other variants of the disease, it is necessary to visit an allergist with the child in order to conduct tests for allergies, to make an immunogram.The examination will help identify the allergen, and then the parents will be able to ensure that the child does not come into contact with the substance causing such an inadequate reaction.

Most often, urticaria is a temporary phenomenon, with age, as immunity develops, violent reactions no longer occur. Only 3% of adults "take with them" in childhood adult allergic reactions.

About how the urticaria looks like, says Elena Malysheva in the next video.

Diet for urticaria in children

Urticaria in children: from symptoms to treatment
Information provided for reference purposes. Do not self-medicate. At the first symptoms of the disease, consult a doctor.