Should I give analgin child? 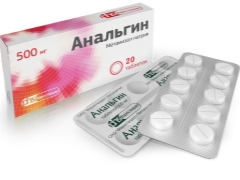 Analgin is known for its properties to eliminate pain and lower body heat. For this purpose, this drug has long been used by adults, but is it possible to give it to children, from what age can treatment with Analgin and how much drug is allowed to give to children?

Metamizole sodium is the active substance in any of the drug options. In 1 ml of the injection form of Analgin may contain 250 mg or 500 mg of such compounds. The dosage of the active ingredient in one tablet is 500 mg. One candle contains 100 or 250 mg of metamizol.

In tablet form, additional substances are calcium or magnesium stearate, povidone, talc, microcrystalline cellulose and other compounds that help to create a solid tablet. In capsules of Analgin in addition to the active ingredient and sterile water, there are no other components. In addition to metamizole candles added solid fats.

How does it work?

Analgin is a representative of a group of non-steroidal antipyretic analgesics. The main action of Analgin is to block the conduction of pain impulses, so this medicine is especially in demand for different types of pain. He also noted a very strong antipyretic effect, but the anti-inflammatory effect of this tool is not very significant. If to compare with Analginom Nurofen or Paracetamol, the antipyretic and analgesic effect of Analgin will be higher.

Video instructions for using Analgin can be viewed in the video:

Can I give to children?

In the annotation to Analgin indicated that the drug can be used in children from 3 months, however It is permissible to prescribe this medication to children under one year only if there is serious evidence. Giving Analgin to babies of the first year of life without a doctor's appointment is unacceptable.

At the age of over 1 year, the drug is prescribed in suppositories (pediatric dosage), and the tablet form is used in children who can swallow tablets without any problems. Injections are prescribed only by a doctor in situations requiring quick relief from pain or fever. Usually, in childhood, Analgin injections are used only when the child is in critical condition.

Most pediatricians, among whom is the popular Komarovsky doctor, allow using Analgin to reduce the temperature or get rid of pain only as a temporary and fast-acting measure.. They prefer to use pain relievers and antipyretics in children with less dangerous side effects, such as paracetamol or ibuprofen.

Komarovsky about Analgin - in the video:

Treatment with Analgin, in the opinion of doctors, is possible with the ineffectiveness of other nonsteroidal drugs, as well as in the absence of other drugs at hand. If it is possible to use paracetamol or ibuprofen, then it is better for children to choose such medications.

What is dangerous for children?

The danger of such a medicine for children's health is due to its frequent side effects. Analgin often provokes allergies, which can manifest anaphylactic shock. Also, from taking Analgin temperature and blood pressure can drop too quickly and for a very long time.

The negative effect of this drug on blood formation, in particular, on the number of leukocytes in the blood, the result of which can be reduced to infectious and inflammatory complications, is also noted. In some children, treatment with Analgin provokes such severe side effects that it is fatal.

Because of the high risk of negative effects, doctors advise giving the child Analgin only in rare cases, if it is not possible to use safer drugs. In addition, it is recommended mainly single use of such a drug. This makes Analgin a reserve drug. Adults should not drink this medicine while carrying a baby or while breastfeeding.

Any form of Analgin can be used:

Injectable form of the drug is often used for renal, intestinal or biliary colic, combined with drugs that have antispasmodic effect (for example, papaverine).

When you can not give a child

Treatment with Analgin is contraindicated in case of intolerance to its active compound. In addition, this drug is not prescribed, if the blood test showed inhibition of blood formation processes, as well as in case of hepatic or renal failure.

In no case should Analgin be used for severe abdominal pain, if the child has not been diagnosed. This is often a symptom of a serious illness, so eliminating pain can “smear” the clinical picture and prevent timely treatment.

Very careful to give analgin when low pressure blood, trauma, allergic diseases and bronchial asthma. If the child has a fever when taking Analgin, hemorrhages appear, the oropharyngeal mucosa is inflamed, or the blood test results change, the treatment stops immediately.

The dosage of the tablet and injectable form of Analgin for children younger than 8 years is better to calculate by weight. The weight of the child in kilograms is multiplied by 5-10 mg. This determines the daily dose, which is divided into 2 or 3 doses. In this case, single doses should not exceed the following recommendations:

Candles Analgin appointed in this dosage:

Too high dose of Analgin can lead to nausea, abdominal pain, shortness of breath, vomiting, drowsiness, noise in the ears. The patient may have a sharp decrease in temperature and blood pressure, an increase in pulse rate, a decrease in urine volume. In severe poisoning, impaired consciousness, acute impairment of the liver and kidneys, seizures, hemorrhages, and other negative symptoms are possible.

If the drug was taken in a very high dosage inside, vomiting should be provoked, and after washing the stomach to give drugs from the group of sorbents and laxatives. It is also recommended to drink plenty of water. With a strong overdose of the child hospitalized, eliminate seizures and other acute disorders, and prescribe hemodialysis.

Analgin sold by prescription. The average cost per pack of 20 tablets is 35-40 rubles. Store the drug should be in a dry place where the temperature will not exceed +25 degrees. In this case, the medicine should not be freely available for a small child.

Shelf life of tablets and ampoules - 5 years, candles - 3 years. The medicine from the opened ampoule should be used immediately. Storage is allowed no longer than 15 minutes. If the drug is left open longer, the contents of the ampoule should be poured.

On the use of Analgin in children there are different reviews. Some mothers are satisfied with the use of this drug in a child, noting that Analgin helped to reduce persistent temperature or very quickly eliminated severe pain. Other parents complain of side effects and consider treatment with Analgin in childhood as an unreasonable risk.

Combination with other medicines

Instead of Analgin for severe pains, Baralgin M, Spazgan, Pentalgin N, Spazmalgon, Tempalgin and other agents can be used. Each of these drugs has its own contraindications and restrictions, so the choice of analgesic is better to do with a pediatrician.

To replace Analgin as an antipyretic for children, you can use:

Analgin with "Dimedrol": dosage for children

Candles "Voltaren" for children on temperature

Efferalgan for children: instructions for use

Candles for children on temperature

Suspension "Panadol" for children: instructions for use
Information provided for reference purposes. Do not self-medicate. At the first symptoms of the disease, consult a doctor.