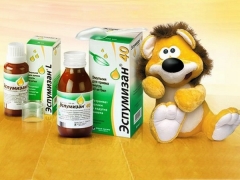 Such a problem as colicappears quite often in newborns and infants, therefore, various drugs have been developed to combat it. One of the frequently used remedies is Espumizan for newborns.

The appointment of Espumizan in childhood is carried out with:

The main effect of Espumizan is to neutralize the gases that accumulate in the intestines of a child, so this drug is a group of carminatives. Its active substance envelops gas bubbles and reduces their surface tension, with the result that they break, and the gases quickly leave the intestines. The use of this drug has a positive effect on the processes of digestion, helps with colic and contributes to a better absorption of both food and other medicines.

Contraindications and side effects

Espumisan can not be prescribed for intolerance of its components, as well as for intestinal obstruction. Espumisan L and Espumizan Baby are also not taken in the case of fructose intolerance, as they contain sorbitol.

Among the side effects of this drug is only possible detection of intolerance to its components. In general, the tool is well tolerated and is considered harmless to children and adults.

The active ingredient in the preparations Espumizan is simethicone. In addition to this compound in each form of release there are excipients - water, sweeteners, flavors and others.

The drug, which is produced in 30 ml vials with a measuring cap, is called Espumisan L. One milliliter of the emulsion of such a drug contains 40 mg of simethicone. The medicine is a white-milky, slightly viscous liquid, which has a sweet taste and a pleasant banana smell.

The product that comes in the form of 100 ml vials with a measuring spoon is called Espumisan 40. In a full measuring spoon of such a preparation, 5 ml of an emulsion containing 40 mg of active ingredient is placed. The drug is represented by a practically colorless, turbid liquid with a fruity odor.

The capsule form of Espumizan is represented by packs of 25 and 50 soft capsules. It is prescribed to children older than six years. Each capsule contains 40 mg of simethicone.

Another form of Espumizan intended for use in newborn babies is Espumizan Baby. Its main difference from other forms of release is the increased content of the active ingredient - 1 ml of the preparation (25 drops) contains 100 mg of simethicone. One bottle of Espumized Baby contains 30 ml of the drug.

How much is: prices in pharmacies

The average price of the drug Espumizan L is 350 rubles. For a bottle of drug Espumizan Baby you need to pay 400-450 rubles. A bottle of funds Espumizan 40 is more expensive because of its larger volume. On average, such a drug costs 500-700 rubles.

Dosage: how many times and how often can the drug be given to infants

Analogs: what can be replaced?

Other drugs with the same action and the same main component are:

In most cases, parents speak positively about Espumizan, confirming that it helps to cope with colic. In addition, mothers note that babies almost always tolerate the drug well without any adverse reactions. Nevertheless, there are also reviews in which parents state the ineffectiveness of the remedy, since this drug does not help some babies.

Plantex as a remedy for colic in newborns

How to do a massage for colic newborn?

Sab simplex for children: instructions for use

Warmers for newborns from colic

Dr. Komarovsky about colic in a newborn

Bobotik for newborns - will it allow to get rid of colic?
Information provided for reference purposes. Do not self-medicate. At the first symptoms of the disease, consult a doctor.