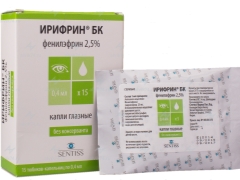 In ophthalmology, local medicines are most commonly used in the form of eye drops. If you want to expand the pupil or affect the vessels of the eye, apply alpha-adrenomimetics, one of which is Irifrin. A preservative-free drug called Irifrin BK is produced especially for children. When is it prescribed to a child and at what dosage is it dripping?

The drug is represented by a clear liquid, which has a light yellow color, but it can also be colorless. The solution is placed in a disposable tube-dropper in the amount of 0.4 ml in each. Five of these tubes are packed in a laminated bag, and one cardboard box includes 3 bags, that is, a total of 15 tubes are in the package.

The active substance in the droplets is represented by phenylephrine in the form of hydrochloride. Since the solution has a concentration of 2.5%, then one milliliter contains 25 mg of phenylephrine. Addition to this ingredient are hypromellose, citric acid and edetate disodium. As part of the medication and water for injection, sodium metabisulfite and sodium citrate dihydrate sodium.

The drug is a group of sympathomimetics that affect alpha-adrenergic receptors. For ophthalmologists, such local effects of Irifrin, such as narrowing of blood vessels in the conjunctiva, dilated pupil and stimulation of outflow of intraocular fluid, are important.

With a sufficiently strong effect on the alpha receptors of the eyes, the drug has almost no effect on the beta receptors located in the heart. Pupil dilation can be observed in a patient 10-60 minutes after contact of phenylephrine on the conjunctiva. The effect of the drug lasts up to two hours.

Drip Irifrin BC in the eyes recommend:

Annotation to the drops does not indicate any age restrictions, but the use of the drug in children under one year old should be only under the supervision of a physician.

And now we offer you to watch a video of how to put eyes on a child.

The drug is not used:

Caution for treatment with Irifrin is required for sickle-cell anemia or bronchial asthma, as well as after surgery in the eye area, since such a drug will interfere with healing.

The use of drops can cause such local reactions as burning sensation, swelling in the eye area, inflammation of the conjunctiva, increased intraocular pressure, blurred vision, increased discharge of tears, redness, and others. It is also possible the appearance of a reactive dilation of the pupil the day after the use of the drug.

In some patients, Irifrin BK can cause dermatitis. In addition, the drug can adversely affect the cardiovascular system, which is manifested by tachycardia, increased blood pressure, arrhythmia, and other signs.

A very high dose of drops affects the child's behavior (he becomes nervous, restless), the heartbeat (it becomes more frequent) and breathing (it becomes weaker). Perhaps the appearance of vomiting, complaints of dizziness, increased sweating. To eliminate these symptoms of overdose, adrenoceptor blocking agents are used, for example, phentolamine.

And now we offer a video release of the program on eye diseases from Dr. Komarovsky about children's conjunctivitis.

The product is sold in a pharmacy by prescription, and the price of one package is on average 550-580 rubles. At home, it is advised to store the solution at a temperature of from 0 to 25 degrees Celsius. For storage, choose a place protected from direct sunlight where there is no access for small children. Shelf life drops - 2 years. It is impossible to store the opened tube, immediately after instillation, the rest of the medicine and the opened package are thrown away.

Moms, whose children have been prescribed Irifrin for myopia or other vision problems, speak mostly well about the medicine. They confirm the efficacy of the drug and the rapid appearance of improvements after its use - increasing visual acuity, eliminating redness, and disappearing eye discomfort. Negative drug reviews are rare and include complaints about side effects or intolerance. 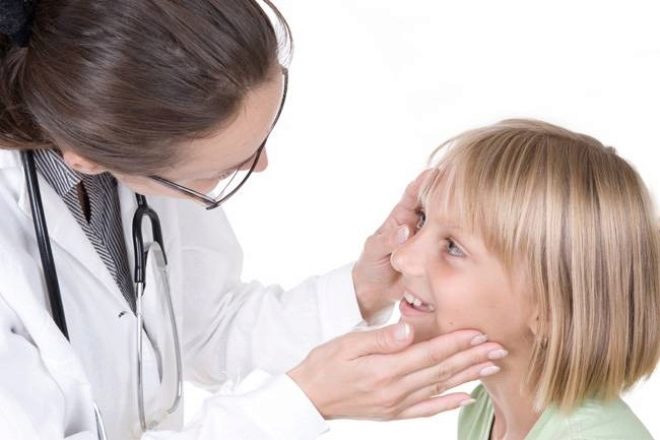 Replace Irifrin BK with Vizofrin, Vizin, Neosinefrin-POS and others. However, they differ in composition and contraindications, so the choice of analogue requires consultation with an ophthalmologist.

Montelar for children: instructions for use

Mezim Forte children: instructions for use
Information provided for reference purposes. Do not self-medicate. At the first symptoms of the disease, consult a doctor.