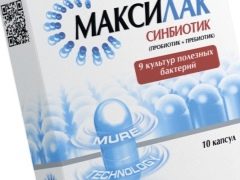 A modern drug called "Maksilak" refers to the group of synbiotics. This is the name of the remedies, which simultaneously contain bacteria (probiotics) that are beneficial for the intestine and substances that promote their growth (prebiotics). With this combination, they mutually enhance their effects, positively affecting both digestion and metabolic processes.

"Maksilak" is produced in capsules, in which the beige color and the shell of vegetable gelatin. They are sold for 10 pieces in one pack, packed in one blister. The contents of the capsules are creamy, but the presence of darker inclusions is normal.

Within each capsule are more than 4.5 billion microorganisms that represent nine different cultures of probiotics. Among them are the bifidobacterium longum, breve and bifidum, as well as the lactobacilli rhamnosus, casei, helveticus and plantarum. In addition, the capsules contain lactococcal lactis and thermophilic streptococci. All microorganisms were lyophilized and supplemented with 63 mg of oligofructose.

Inactive ingredients of Maxilac are corn starch, titanium dioxide, alginic acid, shellac, locust bean gum and other compounds. Such substances complement bacteria and prebiotic, as well as using a special technology "Mure" create a shell that is not destroyed by the action of gastric juice.

Separately, the same manufacturer offers a drug called Maksilak Beby. It is distinguished by its dosage form, which is represented by portion sachets. Inside the bag are microscopic granules containing 1 billion dried microorganisms and 1.43 g of fructo-oligosaccharides. The only auxiliary ingredient of such an agent is corn starch. One pack includes 10 sachets.

The baby also has nine strains of beneficial bacteria, but their list is slightly different from the Maxilac composition in capsules. They are represented by three species of bifidobacteria (lactis, longum and bifidum) and six species of lactobacilli (rhamnosus GG, paracasei, casei, acidophilus, salivarius and plantarum).

Lactobacilli present in the preparation help in the absorption of lactose and inhibit the growth of harmful microbes. Bifidobacteria also have properties to inhibit the pathogenic microflora. In addition, these microorganisms improve parietal digestion. Due to the presence of oligofructose, the reproduction of the useful flora is stimulated, and the functions of the gastrointestinal tract are improved.

The combination of beneficial bacteria with oligofructose / fructooligosaccharides leads to such positive changes:

Given the properties of the drug, Maksilak and Maksilak Baby are prescribed:

Despite the fact that the granules are considered as the children's form, the capsules "Maksilak" are also used in children. In this case, the “Baby” sachet is allowed to be given from 4 months of age, and the solid form is prescribed to young patients over three years old.

The use of capsules and sachets is prohibited only with individual intolerance.

Since there is no lactose in the composition of Maxilac and Maxilac Baby, then with lactose deficiency, these drugs are not contraindicated.

After opening the bag and pouring the granules into a warm liquid, Maksilak Baby is given to the child during feeding once a day. The product can be stirred in milk / milk mixture or water, the temperature of which does not exceed +40 degrees. Children up to 2 years old are prescribed the contents of one sachet per day, and patients older than two years should be given granules from 2 bags at once.

Capsules "Maksilak" give little patients older than three years also once a day. It is best to take this tool during one of the meals (the manufacturer recommends drinking the medicine in the evening). A single dose for children is usually one capsule, but taking into account the disease, the dosage can be adjusted by the pediatrician.

For children under 5 years of age or older patients who find it difficult to swallow solid forms of drugs, it is permissible to open the capsule and pour its contents into warm milk or water.

As with the “Baby” granules, the liquid should not be hot, and the child should swallow the drug immediately after mixing.

The duration of the reception "Maksilaka" should check with the doctor, but the minimum period of use is 10 days. If the drug is used for treatment, then it is stopped to give after the disappearance of the symptoms. For prophylactic purposes, the remedy is usually given in courses for 1 month If necessary, such courses are repeated two or three times a year. If Maxilac is used to prevent dysbacteriosis under the influence of drugs, then symbiotic should be taken for as long as the treatment lasts. 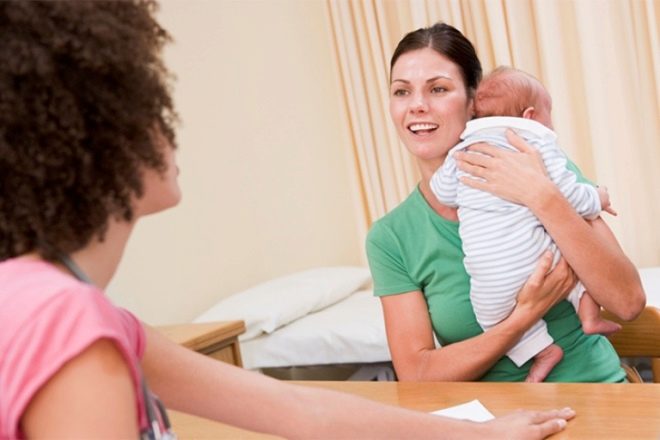 "Maksilak", as well as the means "Baby", is sold without a prescription, since it refers to dietary supplements. The average price of 10 capsules is 430-450 rubles. Approximately the same amount must be paid for the packaging of Maxilak Baby. Neither sachets with granules nor capsules need to be kept in the refrigerator, but can be stored at temperatures up to +25 degrees. Maksilak has a shelf life of 2 years, while Baby is 18 months.

In most reviews of Maxilak, this medicine is called effective and safe. Among the main advantages of sachets, “Baby” notes the ease of use in childhood, the ability to give babies and toddlers up to 3 years old, as well as neutral taste, good tolerance and low frequency of intake.

The medicine in capsules is also praised for the need to take only once a day and the absence of side effects. The disadvantages of both drugs usually include their high cost. In addition, there are reviews in which they note the absence of a positive effect after the course of treatment.

The most popular analogue of "Maksilak" can be called "Linex". Such a probiotic is also produced in powder and capsules, but it includes only 1 or 3 types of beneficial bacteria. In addition, there is no prebiotic component in its composition, and lactose is present in the capsules. However, it is possible to give Linex to children at any age, even to newborns. In this case, the indications for its reception are the same as for the use of "Maxilak", for example, this probiotic is highly in demand with courses of antibiotic therapy.

In addition to "Linex", the doctor may advise other probiotics or prebiotics, for example:

Such agents are usually provided in packaged portions of the powder or capsules.

In order to choose the most suitable analogue from their variety, it is best to consult your doctor.

Read more about the drug "Maksilak" for children, see the following video.

"Vitaon" for children: instructions for use

Pyobacteriophages for children: instructions for use

Otofag for children: instructions for use

Candles "Corilip-Neo" for children: instructions for use

"Teraligen" for children: instructions for use and reviews

Chemerichna water from head lice in children
Information provided for reference purposes. Do not self-medicate. At the first symptoms of the disease, consult a doctor.