Effective preparations for children with colds, ARVI and flu 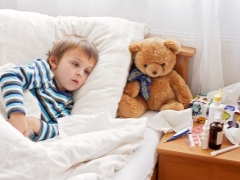 Caring parents always try to equip a home or travel first aid kit with flu, acute respiratory infections and colds for a child. And indeed, sometimes the disease takes them by surprise - at the weekend, but at night, away from home. And I want to have on hand were the most necessary drugs that do not harm the baby and ease his condition before the arrival of the doctor. In this article, we will consider what means should be included in the first-aid kit and in what cases they should be given.

Flu, cold and SARS - what is common?

Colds in the people are called nothing other than a variety of viral diseases. SARS and flu are also viral infections. The difference between them lies in the fact that they are caused by different viruses, pathogens. It can be not only influenza virus, but also adenoviral infection, rhinovirus, respiratory syncytial infection, parainfluenza virus. In total, there are more than 300 viruses that can "visit" your child, and it is not possible to determine which virus has exactly caused unpleasant symptoms at home.

Various ailment viruses have a lot in common in symptoms. As a rule, the disease in a child always occurs only in an acute form. It begins with a rise in high temperature, the appearance of respiratory catarrhal symptoms - dry and unproductive cough, runny nose, and sometimes - rhinorrhea (flow from the nose), headache, muscle aches, chills.

The virus in the child’s body “rages” for 3-5 to 7 days, depending on the type of virus, and then the immunity by developing specific antibodies to the pathogen takes over, the disease subsides.

Surprisingly, with or without drugs, but the virus in a child’s body will live exactly as long as it can live.. Immunity in any case cope with it. However, some drugs will help the child's body to cope with the disease more easily, as well as to prevent the serious complications that all viral infections are fraught with, especially the flu.

Before you go to the pharmacy to choose drugs, you should clearly understand what and why you are treated for influenza or ARVI. There is no universal cure for viral ailments. The exceptions are some very few antiviral drugs that have a devastating effect solely on the influenza virus.

Since there is no cure for the virus, ARVI drugs are prescribed for symptomatic treatment in order to facilitate the course of the disease in anticipation of a completely self-healing recovery. If the child is suddenly ill, the parents should take the right steps to recover from the first minutes - provide him with bed rest in a cool, well-ventilated room, plenty of warm drink, light clothes so that the baby does not sweat.

You should call the doctor, and if the child is not a year old, then an ambulance. 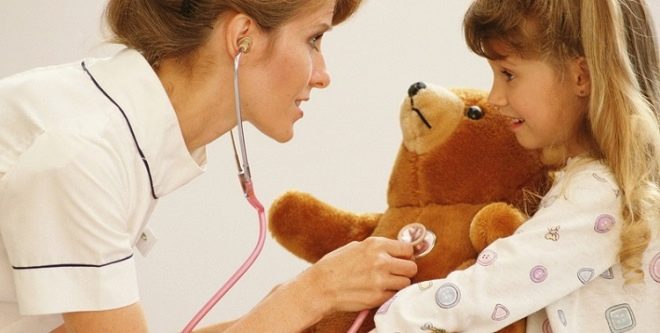 It is up to the doctor to decide which medicines to treat the child, but the parents can simplify the task to the doctor by having drugs for any “cold” case in the first-aid kit. The expert called will certainly appreciate the efforts and prescribe a treatment regimen from what is already available. In addition, many drugs can be useful at the pre-medical stage.

Intoxication in the children's body causes the penetration of the virus into the bloodstream. It can manifest itself in different ways. Most often - severe pain in the muscles and joints, often also vomiting and diarrhea on the background of high temperature. And therein lies the second danger - dehydration. The younger the child, the faster it loses its liquid reserves, the bill can go to the clock.

It is on the prevention of dehydration and overheating that the main treatment for influenza, ARVI and all types of viral infections will be directed.which in the people habitually call "cold".

Depending on those or other symptoms, their severity, all drugs should be divided into several large groups. So parents will be easier to navigate in what and when the child may need.

The temperature of a viral illness is necessary for the child, so that immunity can more quickly produce antibodies to the virus. But if the thermometer has risen to the mark of 39 degrees, and in children under 3 years old it is 38 degrees, it is necessary to start taking antipyretic drugs. This group of cold and flu medicines should always be on hand. Most often, the temperature rises in children at night, and in the pharmacy on duty will not go to all and not always.

Choosing among the great variety of antipyretics, you should focus on drugs that contain paracetamol. This substance is considered the safest and most effective for children. From the age of 16, you can also take acetylsalicylic acid-based drugs (for example, one of the forms of Aspirin).

But acetylsalicylic acid is absolutely contraindicated for children. It can cause the death of a child due to severe damage to the liver (Ray or Ray syndrome).

So, in the pharmacy for a child under 16 years old, you should purchase drugs based on paracetamol. Baby from 2-3 years suitable tool in the syrup - "Panadol", "Nurofen."

For newborns and children up to one year old, you can put rectal suppositories (suppositories) - “Paracetamol”, “Cefecone D". Children with 7-8 years You can offer "Paracetamol" tablets. An effective cure for fever for colds and flu is Ibuprofen. This drug belongs to the group of nonsteroidal anti-inflammatory drugs. It is a mere penny medicine, so buy it and keep it in the medicine cabinet just in case.

The medication in the age dosage (specified in the instructions for use) can be given to the child in the event that the temperature is not easily reduced by drugs with paracetamol.

If the baby's disease is accompanied by a runny nose (current snot), nothing to drip and smear in the nose is not required. Rhinorrhea - a protective mechanism that allows the mucous membranes of the upper respiratory tract to partially get rid of the virus that has penetrated them. On the contrary, you should flush your nose, irrigate it abundantly with saline or preparations based on seawater, for example, Aquamaris.

In no case it is impossible to abuse these drops, because vasoconstrictor drugs contribute to the development of persistent drug addiction. More than 4-5 days in a row vasoconstrictor nasal drops can not be used.

If the snot is not just thick, but also saturated yellow, green with a bad smell, you should immediately call a doctor, because such discharge from the nose is a sign of adhering bacterial infection. The child needs drops with antibiotics, which the doctor will prescribe. They can be purchased at a pharmacy by prescription.

The onset of viral diseases is characterized by dry cough. The task of parents is to quickly and effectively contribute to the dilution of sputum, so that the cough becomes wet and productive. Therefore, in addition to abundant warm drinking, the child is given mucolytic drugs - “Mukaltin», «Codelac Broncho"," Lasolvan ". Most of these drugs are produced in convenient for reception forms - in the form of syrups with a pleasant fruity smell and taste.

As soon as the sputum begins to form, and the cough becomes wet, the child should never be given antitussives that suppress the work of the cough center in the brain. He needs to cough so that the sputum does not stagnate in the bronchi so that there is no inflammation of the upper and lower respiratory tract.

From vomiting and diarrhea, from intoxication

If a child has a viral illness with symptoms of intoxication, it is important to drink water as much as possible at room temperature. This will help prevent dehydration. True, water alone with vomiting or diarrhea does not restore the water-salt balance. Therefore, in the first aid kit should be means for oral rehydration - "Smecta"," Humana Electrolyte ","Regidron».

These dry mixes are packaged in sachets, it is easy to dissolve them at the required amount of water according to the instructions and give the child plenty of this mixture. If you can't get drunk, you should call an ambulance. Doctors hospitalize the baby and they will inject him with the means for rehydration intravenously.

For diarrhea and vomiting, enterosorbents will help the child - "Enterosgel», «Enterol". The use of antiemetic and antidiarrhoeal drugs of direct action without the recommendation of a doctor in childhood is prohibited.

When ailment is accompanied by conjunctivitis, it is impossible to do without consulting a doctor simply because the inflammation of the mucous membrane of the eye can be viral, bacterial and even allergic. The true reason must be established by specialists. In the home first aid kit can have dropsTobrex», «Ciprofloxacin" or "Ophthalmoferon».

Unfortunately, the majority of drugs whose ads are seen by parents on TV are not considered effective for flu, colds and ARVI. The fact is that they do not have clinically proven efficacy, besides most of the drugs (Viferon, Otsillokotsinum, Anaferon Children’s, Ergoferon and others) belong to the group of homeopathic medicines.

This means that, at best, they contain only a few molecules of the active substance, which are clearly not enough to defeat the virus. Only a few flu drugs have proven effectiveness - “Tamiflu"(Not to be confused with" Theraflu ")," Oseltamivir ". These funds should be applied strictly according to the testimony of the doctor, because they have a lot of side effects that may be more dangerous than the flu virus. Such anti-influenza drugs are most often used to treat children in an infectious diseases hospital, where the child is under round-the-clock medical supervision.

Doctors will prescribe antiviral drugs, even homeopathic, not because they are sure to help the child, but because the parents require that they be prescribed something. And 99% of antiviral drugs do not harm at least. The rest - make your own immunity. And after five days of taking “Anaferon”, not a single parent will say that the child recovered himself. He will have a persistent illusion that it was “Anaferon” that helped the baby recover.

Therefore, antiviral agents in the home medicine chest can not have.Given that they are expensive, but they don’t have any effectiveness at all. Folk remedies (if they are reasonable and correct) and symptomatic treatment of parents will be able to achieve exactly the same result, exactly at the same time as taking expensive, "good" antiviral drugs.

Preparations for the prevention

For the prevention of viral diseases drugs do not exist. Flu is vaccinated, it should not be neglected. Receiving antiviral drugs for the prevention of colds is a waste of money. The probability of getting sick does not depend on how much “Anaferon” mother “fed” to the child since the beginning of autumn.

Reviews of doctors in this regard are unanimous - strong immunity and hardening, vitamins and proper nutrition, as well as prevention measures will help.

To learn how to treat ARVI in children, see the next video from Dr. Komarovsky.

How many days does a child usually have a temperature with ARVI?

At what age can Omez be given to children and how to use it?

Symptoms and treatment of ARVI in children

Painkillers for children
Information provided for reference purposes. Do not self-medicate. At the first symptoms of the disease, consult a doctor.