Should I put candles "Viferon" for children and how to do it: instructions for use 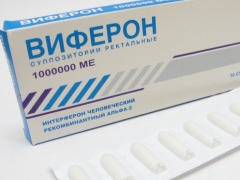 For the treatment of a child from viral infections or to strengthen his defenses so that the viruses are not afraid of the baby, Viferon is often prescribed in candles. Is this drug safe for babies, in what dosages is used and what else do parents need to know about the use of Viferon suppositories in children?

The main active ingredient in the preparation of Viferon is alpha-2B interferon, which is created synthetically (it is also called genetic engineering or recombinant). This substance is marked antiviral properties, as well as immunomodulatory effects. Interferon after administration to the rectum and suction activates the activity of cells that protect children's bodies from viruses and bacteria.

Its effect is enhanced by the presence in the preparation of such additional components as ascorbic acid and alpha-tocopherol acetate (this is a form of vitamin E). Since the foundation of candles is cocoa butter, this facilitates their introduction and contributes to a more rapid dissolution in the intestine.

All these effects on the child's body lead to a more rapid recovery due to the suppression of the infectious process and activation of the baby’s immune system.

Candles Viferon is recommended to use when:

Due to the inclusion of Viferon in the treatment regimen with the use of hormonal and antibacterial drugs, it is possible to reduce their therapeutic doses, which reduces the toxicity of drugs and the number of side effects from such therapy. Viferon is well combined with these drugs, without reducing their therapeutic action.

Viferon in childhood is not prescribed for intolerance to any of the components of the drug. There are no other contraindications to the use of this drug.

Candles for rectal administration of Viferon have a bullet shape, yellow-white color (sometimes with a marble pattern or small patches) and up to 10 mm in diameter. They are packed in cell blister packs of 5 or 10 each. Store this form of the drug should be in low temperature (+ 2 + 8 º C), so they are kept in the refrigerator.

Suppositories Viferon are available with different content of the active substance, while in childhood, the candles are used 150000ME and 500000ME. In adults, candles with the dosage of 1000000ME and 3000000ME are used.In addition to candles, Viferon is also produced in such forms as gel and ointment.

Rarely encountered side effects from Viferon in candles are an allergic reaction in the form of itching and rash on the skin, weakness, headaches, fever, chills, muscle pain, decreased appetite, nausea. As soon as the drug is no longer used, within 72 hours these phenomena disappear, leaving no consequences.

The use of candles Viferon allows you to avoid the occurrence of side effects inherent in interferon administered parenterally. This is due to the lack of antibodies that neutralize the antiviral properties of the drug.

Like all drugs containing interferons, the drug is an immunomodulator and affects the immune system, so many parents complain about the addiction of the baby's body to Viferon, when, with frequent use, it is no longer able to cope with viruses independently.

Features of the application for newborns

The drug is completely safe for the infant the first month of life, including babies who were born before the prescribed period. The dosage of Viferon in case of prematurity is determined individually, taking into account the gestation period.

The selection of the dosage of suppositories is primarily influenced by the age of the child. Up to the age of seven, they use candles containing 150,000ME of the active substance:

As for premature babies, the dosage is determined based on the period at which the baby was born:

Children over 7 years old are prescribed suppositories 500000ME. They are administered 1 piece twice a day with a pause at 12 o'clock. When treating viral hepatitis, dosages are often increased, relying on them based on the body area of ​​the child, therefore, the prescribing physician should prescribe candles for such infections in childhood.

The course of treatment Viferon lasts 5 days. After a five-day break, another course of therapy is possible. As a rule, such courses of treatment for various infections require several:

On how to put candles to a child, see the following video.

Download detailed instructions for use by clicking on the following link.

A popular doctor refers Viferon to the means whose effectiveness has not yet been proven. He believes that such medicine is not required for children either for treatment or for the purpose of prevention. In this case, the famous pediatrician does not consider such a drug to be harmful.

Using Viferon in childhood Komarovsky calls more psychological therapy for parents, because it gives them confidence that they at least do something to treat the crumbs.

Parents who used Viferon suppositories in their children respond differently to the drug. Some note the strengthening of immunity and the acceleration of recovery from viral infections. The advantages also include compactness, safety for babies and ease of use.

Others complain about the lack of effect, the appearance of allergies, addiction, as well as the high cost. Packing suppositories 150000ME costs an average of 160-200 rubles. Candles Viferon 500000ME can be purchased for 230-300 rubles per pack.

If it is impossible to use Viferon, you can resort to one of its analogues containing the same active ingredient:

In the next video, an employee of the Pirogov RNRMU Immunology Department will tell more about Viferon preparations and its beneficial effects on the body.

Dr. Komarovsky about the means of ORVI for children

Antivirals for children under one year

Spray "Panavir" for children: instructions for use

How often can antivirals be taken by children?

Groprinosin for children: instructions for use

Umkalor for children: instructions for use

Antiviral eye drops for children
Information provided for reference purposes. Do not self-medicate. At the first symptoms of the disease, consult a doctor.