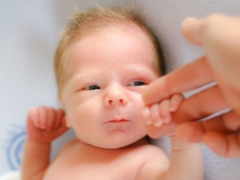 In order for the newborn infant to adapt to the conditions of life after giving birth, it has a number of physiological unconditioned reflexes. Checking them, doctors are convinced that everything is in order with the baby, or they reveal different health problems of the baby. Some of the reflexes are very important for the development of motor skills as the baby grows. One of these reflexes can be called prehensile.

This is one of the most ancient human reflexes that occurs immediately after birth. He is considered physiological at the age of the first three or four months, after which, on the basis of such a reflex, the skill to arbitrarily seize objects is formed.

To cause this reflex, you need to press on the palm of the baby. The crumb will immediately grip your finger, sometimes so tightly that the baby can be pulled up. Similar action can cause the manifestation of the grasping reflex on the legs - if you put your thumb on the foot, the fingers will bend.

About prehensile and some other innate reflexes, see the video:

Stages of development of the conditioned reflex

There are four stages, during which a conditioned grasping reflex is formed:

What to do if the reflex is weak or absent

The absence or too weak manifestation of the grasping reflex in the infant during the first months of life should be the reason for a more detailed examination of the crumbs. The child should be examined by a neurologist, checking other reflexes to rule out neurological pathology.

Sometimes the manifestation of the grasping reflex is affected by the reduced muscle tone of the baby. This problem is solved by special massage courses.

In order to stimulate the development of a conscious grasping reflex, parents should invent more games in which the infant will grab objects with his hands. For example, you can put a bright toy next to the baby and wait until it finds itself in the hands of a toddler.

If a child has not learned to grasp objects consciously by the age of 9 months, this should also be a reason for going to the doctor.

How to swaddle a newborn?

Cutting, bandaging or clamping the umbilical cord after delivery

Newborn eyesight
Information provided for reference purposes. Do not self-medicate. At the first symptoms of the disease, consult a doctor.