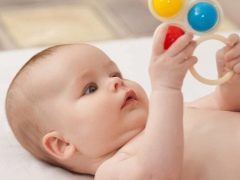 A newborn baby can sleep even in a loud noise, and this does not bother him at all. But parents at the same time wonder if the child hears at all. In this article we consider the features of the hearing of newborns, as well as methods for determining it at home.

You might be surprised, but hear babies start still in the womb. The organs of hearing are formed early — even at 5 weeks of gestation, the rudiments of future ears, or rather, the inner ear, are formed. At 7 weeks, the middle ear is formed, and then the auricle. Solid ears of the fetus are only shortly before birth.

Important for gaining the ability to hear the inner ear completes its formation for a period of about 19 weeks. And the auricle continues to remain rather soft after birth, the ear canal is narrow, and this will correct itself only by the first year of life.

Babies begin to pick up the first sounds in mother's belly after 14 weeks. But while these sounds are more like the ears of a reptile, the fruit picks up the vibrations that accompany the sound waves. As the formation of the inner ear is completed and the labyrinth hardens, the ability to hear better appears. This happens after 20 weeks, by the 26th week of pregnancy, the baby in the stomach hears almost like us, but with the amendment to the fact that he is still in the aquatic environment.

He hears her mother's heart beating and blood flowing through the vessels, how her intestines work. He hears her voice and quickly gets used to it. Sounds from the outside start to interest the baby only in the last weeks of pregnancy. The child hears the music that sounds at mom in the headphones, but only if the headphones are put on directly on the stomach. If they are on mom's ears, the child cannot hear the sounds.

A baby is born to hear. If the vision of a newborn is very imperfect, and only blurry fuzzy spots are perceived by a crumb, then everything is fine with hearing.

Of course, provided that in the process of laying and development of hearing organs in the prenatal period of development, there were no errors and problems that could affect the state of hearing.

In the first days of life (usually after the second day), a special study is conducted in the maternity hospital for all newborns - hearing aids or audio screening. A special apparatus fixes the response of hair cells to sound stimuli. The second time screening is recommended at the age of 1 month, 3 months, half a year.

It is difficult to say how reliable such a study is. If it gave the most accurate data, it would be possible to diagnose hearing pathologies up to a year.

In the meantime, most cases of minor sensorineural hearing loss and one-sided hearing loss or deafness (if you do not hear one ear) are detected much later. That is, a child who has successfully passed an audio screening may well be hard of hearing.

The maternity hospital uses a method of delayed otoacoustic emission.. A portable device with a small thin flexible probe is called an audiometer. One part of the probe is placed in the ear of a baby. The device sends sounds through the probe. The hair cells in the inner ear pick them up and increase them if the child hears.If not, then the hair cells do not receive a signal, there is no impulse. For more accurate results, it is considered optimal if the baby is fed and sleeping.

In the extract from the hospital, if you look closely, you can find the following notation: D (+) = S (+). This means that the child was successfully screened for both the right and left ear. He hears.

If instead of pluses there is a minus, the screening showed no reaction of the hair cells, and therefore an additional examination will definitely be assigned to the child.

Screening of premature babies has its own nuances. He carried out an acoustic examination not on the second day, considering the immaturity of all organs and systems, including hearing organs, but on any day after 2-4 weeks of life.

The risk group for possible pathologies includes children born to deaf or hearing-impaired parents, as well as children who were born from a pregnancy in which a woman has had infectious viral diseases, especially if it happened in the early stages.

How to check at home?

All parents of newborns, one way or another, try to understand for themselves how the baby sees and hears. At home, help such a method as monitoring the child's reaction to sounds. The behavioral method is only approximate, inaccurate, because in case of detecting some deviations, it cannot show how significant the hearing loss is, how it is caused. But from a home check is not required.

Parents can check their hearing in order to consult a doctor if they have questionable or unsatisfactory results. No need to wait for the child to grow up. For normal mental development and development of speech, it is important to hear, and therefore, hearing correction is possible in infancy: children are Hearing Aids (ear correctors), carry out surgery to restore the auricle, if there are defects of the outer ear.

There are plenty of ways to help a child, but help will be more useful if it is provided as early as possible.

If the child already has a month, you can try to apply the behavioral method. It is based on certain reactions of the baby to the sounds. It is important that the child is at rest, dry and well fed..

First, make different sounds from the right ear, and then from the left. Start with clapping hands at a distance of about half a meter. Then check how your baby perceives quieter sounds, for example, the sound of a rattle (choose a toy with an initially soft sound). High frequencies can be checked with semolina, which mother can pour into an empty metal jar. Shake such a can near the ear - the baby can only catch the high-frequency sound of the grain from close range.

How to understand that a child perceives one or another sound:

Home tests for hearing tests are never carried out for children who are ill, who have cramps or have a tooth cut.if the baby is hungry or not enough sleep. Any discomfort that the baby feels increases the likelihood of improper behavioral responses to sounds.

In the first month of life, children almost do not distinguish low frequencies, for them the high-frequency range is more familiar. If the tests are carried out for children from 3 months and older, then such an important feature as head turning to the sound source is added to the list of reactions.

A hearing test based on the reproduction of different sounds in frequency is called the Kalmyko methodhowl For such a test, you will need three plastic containers, which are one-third proposed to fill with semolina, buckwheat, and peas. This will be high, medium and low frequencies.To check in the assistants will have to attract dad or grandmother. While one distracts the child’s attention with a bright toy, an unusual object, the second is half a meter from the right, and then shakes from the left ear with a jar. They start with semolina (that is, with high-frequency sounds), then they take buckwheat, and last of all - peas. Between the change of cans make a break for a couple of minutes.

The test is considered successful if the child, even if not distracting from the toy, reacts (even briefly) to the sound of croup in banks.. He can stand still for a second, turn his head and look at the can, start looking for the source of the sound through his eyes, change his expression. If there is no reaction at all, you should show the child to the ENT and audiologist.

Hearing problems in newborns and infants may vary. The reason for the lack of hearing in a severe case lies in the anomalies of the auditory nerve or the auditory center of the brain, and maybe the result of mechanical damage - the mother cleaned the child's ears with ear sticks and damaged the membrane.

In the second case, it is sometimes quite enough to clear the auditory passages, drop the drops, and everything passes. But more often in the case of hearing loss, medications are ineffective, especially if hearing loss is congenital. Forecasts, alas, disappointing. It is impossible to cure the disease, but it is possible to significantly improve the quality of life of the child, give him a chance to develop normally, learn to speak, and adapt to society. This will help audiologists and hearing aids.

Hearing aids, cochlear implant surgery can give the child the opportunity to hear. Reviews of such methods are good, because they give the hearing impaired children a real chance of a normal and fulfilling life.

The specialist in the video below tells about the early diagnosis of hearing loss.

Why do babies and babies cry in their sleep?

Hydrocephalus of the brain in newborns
Information provided for reference purposes. Do not self-medicate. At the first symptoms of the disease, consult a doctor.