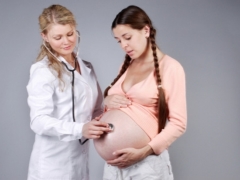 Future mothers often experience that labor does not start earlier than the time specified by the doctors, but it also happens that the time limit has already come, but there are still no signs of labor activity. Is it dangerous and what is being done if the pregnancy lasts longer than expected?

The time at which the pregnancy is considered postponed

On average, a normal pregnancy lasts 40 weeks - during this time the fetus develops so much that it can independently exist outside the mother's womb.

Most doctors call the period at which the pregnancy becomes postponed, 42 weeks, but this can be a pregnancy after 40 weeks, if the state of the placenta and fetus has changed.

If a woman carries a fetus for 41-42 weeks, but there are no signs of over-ripeness of the child and the onset of aging of the placenta, such pregnancy is called prolonged.

When her baby is born later than expected, but is healthy and full-term. One of the reasons for such a “delay” of a normally developed baby inside the uterus is the long menstrual cycle of a woman before conception.

True pereasivanie observed in women, gestation period exceeded 40 weeks, but at the same time signs of aging began to appear in the placenta, and the condition of the fetus deteriorated. Such a pregnancy leads to the birth of an overripe fetus.

In the following video you can learn more about the causes of post-term pregnancy and how to determine it.

Among the factors provoking pererashivanie called:

A perennial pregnancy manifests itself:

In babies born as a result of post-term pregnancy, they note:

The afterbirth will have a green color, and in the tissues of the placenta you can identify petrification (hardened areas).

First of all, determine the gestational period of pregnancy, counting it from the last menstruation (and if you know the exact dates of conception or ovulation, then from them), as well as on the basis of the first perturbations and ultrasound data.

Next, they examine the pregnant woman and determine the abdominal circumference, the height of the uterus bottom, and the weight of the future mother. A gynecological examination (it will reveal a neck unprepared for childbirth and changes in the head of the fetus) and an ultrasound scan (it will help to detect the reduction of water and the presence of inclusions in them) are by all means appointed.

After a dopplerography, the placenta is aged (by its bloodstream), and cardiotocography helps to detect hypoxia in the fetus. In some cases, resorted to cervical amnioscopic examination (if a woman's cervix is ​​soft and slightly ajar). The postmaturity can be finally confirmed only after delivery by identifying the symptoms of fetal over-ripeness.

What is the danger of delay?

Pregnancy, which was delayed more than the expected period, may end in complicated childbirth, sometimes with the need for surgery and an unfavorable outcome. For babies born during such pregnancy, the risk of damage to the nervous system due to hypoxia is 2–5 times higher, because due to the dense bones of the skull and an insufficient amount of lubricant, fetal movement through the birth canal is difficult.

With a gestational age of 41 weeks, the expectant mother is hospitalized at the maternity hospital to resolve the issue of delivery.

Pregnancy during the transition can end with a spontaneous onset of labor, but quite often it is necessary to initiate labor activity artificially.

If the cervix is ​​still immature, topical treatment using a hormone gel or tablets is used for several days. Such drugs soften the cervix and dilate the cervical canal. Next, prescribe medications, the action of which is the stimulation of uterine contractions. In the process of birth continuously monitored fetal heartbeat.

If the crumbs develop hypoxia acutely, the woman is noted to have weak labor or clinically narrow pelvis, and in some other cases the postponed pregnancy ends with surgical intervention.

Possible complications of childbirth for mother and child

If the pregnancy is postponed, the following situations may occur during childbirth:

After childbirth, the uterus can be poorly reduced, which threatens with the accumulation of lochies and difficulties with their discharge from the uterus.

Implications for a newborn baby

In children who were born overripe, can develop:

To prevent problems caused by a postponed pregnancy, the expectant mother should be more careful about her health. She can advise:

Care and frequent problems in children after ear piercing
Information provided for reference purposes. Do not self-medicate. At the first symptoms of the disease, consult a doctor.