Review of creams and ointments for diaper rash in newborns 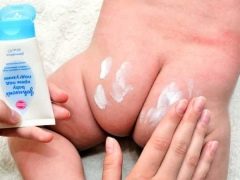 Few parents of infants and newborns manage to avoid such an unpleasant phenomenon as diaper rash in a child. And not always the cause of the violation of the baby’s skin condition lies in the fact that adults violate the rules of baby care. But almost always the actual question is what means it is worth having in the first-aid kit to help the baby quickly get rid of redness, cracks and pustules on the skin.

General information about the disease

Not every redness on the skin of a newborn should be considered diaper rash. In medicine, diaper rash includes local inflammation of the skin, which usually occurs as a result of skin irritation by feces, urine, excessive moisture, and also during a strong allergic reaction.

Before you choose one or another tool for the treatment of diaper rash, it is important to understand what type and type of baby diaper rash, After all, it depends on what exactly the tool will need to use.

It is possible to do without consulting a doctor only in the case of mild diaper rash, it is generally treated with little or no cosmetic or medicinal products. It is enough to undermine the child, arrange air baths for him - and there is no trace of diaper rash.

In the treatment of diaper rash of the second degree, when the inflamed skin becomes wet, there is erosion, the use of ointments and creams with a drying effect is shown. These include all products based on zinc oxide, they will be discussed below.

For diaper rash with a fungal complication, antifungal ointments are used.

When pustules cause antibiotic ointment, but only after the treatment of pustules with aniline dyes, which include brilliant green, blue, "Fukortsin".

Children's cream in the treatment of diaper rash is not recommended, no matter how good it may be. The fact is that children's creams are very fatty in their composition. Their task is to moisturize, not dry. To dry, it is wiser to use powder, but its use is limited if the child has cracks, ulcers, eczema.

There is great doubt about the need for the use of medicine for children's skin, if it is perfectly healthy, if there is no diaper rash. The best way to prevent inflammation is to maintain the correct temperature in the room (it should not be hot), to avoid wrapping up the child at which he sweats, to regularly change the diaper.

There are many ratings of funds for childhood diaper rash, but reasonable mothers should understand that their purpose is different, and therefore you should not compare antibiotics with zinc-based ointments: initially these drugs will be different and will be used for different diaper rash. Therefore, we have compiled a detailed description of the funds that are worth paying attention to and which can be included in the composition of the home first-aid kit.

Cream of good quality, it is guaranteed by the Swiss and German manufacturers. Excellent for the treatment of diaper rash of light and medium degrees, as a cream under the diaper for problem skin.

The main active ingredient is dexpanthenol. It has a local healing effect, improving metabolic processes in damaged or inflamed skin. Penetrating into the skin cells, dexpanthenol quickly turns into pantothenic acid, which speeds up the regeneration processes.

Apply to the place of diaper rash need after the child is washed away, the skin will be well dried with a towel or a soft diaper. If there are moist ulcers, it is undesirable to apply, because the tool has a slight moisturizing effect.

Minus - the price. The cost is quite expensive (from 500 to 800 rubles, depending on the capacity of the tube and the region).

Dexpanthenol is also called the active substance of this ointment. It is produced in Russia, and therefore is cheaper than “Bepanten”, although drugs can be considered analogs by active substance.

A definite plus - a huge choice of packaging forms - there are tubes of 20 grams, 30, 40, and 100 grams each. Accordingly, the price starts from 80 rubles for a small package, and therefore the cream is available to all segments of the population, regardless of income level.

This ointment is applicable both to newborns and older children. Cases of an allergy to this means are not revealed.

It can be used to treat light and medium diaper rashes, as well as to care for a child as a cream under the diaper.

The drying preparation on the basis of zinc oxide. Helps to rid the skin of the baby from excess moisture, dries pockets of soak, eczema. Indispensable for medium and severe diaper rash, when dexpanthenol-based ointments described above cannot cope.

Zinc ointment has anti-inflammatory effect., and zinc oxide has an effect even on some disease-causing bacteria, therefore in medium and heavy diaper rash, it is also prescribed as a means of preventing pyoderma and other complications.

Theoretically, it can cause an allergic local reaction in infants with tender skin, but in practice this happens infrequently.

The ointment is applied to a clean surface 2-3 times a day until it stops soaking and reduces inflammation. It is not necessary to combine the tool with moisturizing ointments and creams for children. The cost is very affordable, about 50 rubles.

Known antibacterial local drug consisting of methyluracil and chloramphenicol. It is noteworthy that the tool does not contain auxiliary components, and therefore each of the active ingredients has a healing effect. Suitable for the treatment of diaper rash, accompanied by the formation of pustules, wounds, because not only kills bacteria and E. coli, but also prevents infection. Suitable for medium and heavy degrees of baby diaper rash.

Ointment can lubricate the inflamed area of ​​the skin, and you can make lotions with it - as more convenient.

In severe diaper rash, it is recommended to pre-lubricate the pustules with green paint or “Fucorzin” to achieve a more pronounced antibacterial effect.

Anti-inflammatory cream with a slight moisturizing effect. Antibiotics does not contain. But given that the composition is able to retain moisture, It is undesirable to use such a tool for moist eczema, especially in the groin and skin folds of the infant.

Big and important plus - no addiction, the effect of the application is not reduced even with daily use of the cream. The main active ingredients are cetrimide and benzalkonium chloride. These are antiseptics that complement each other in their action. The cream can be used for the treatment of light and medium diaper rash, and for their prevention in children prone to dermatological problems.

Cost - from 350 rubles. Among moms better known as "pink cream".

Often the drug is called an ointment and a cream. But it is produced only in the form of an ointment, which is almost half of zinc oxide. In this way, the drug has a drying effect, and therefore can be used with medium and mild forms of diaper rash.

In addition to the main active ingredient, which helps to dry weeping eczema and ulcers, the ointment contains cod liver oil, which has a pronounced healing effect on the skin.

Used to prevent diaper rash, especially in children with very sensitive skin. Cod liver oil creates a thin film on the delicate skin of an infant, which partially neutralizes the aggressive effects of urea, ammonia and other irritating components of urine and feces.

A popular and very effective drug related to dermatoprotectors. It has anti-inflammatory effect, helps to get rid of excess moisture, disinfects and covers the skin with a protective filmand therefore it can be a choice of dual purpose - for treatment and for prevention.

The basis of the composition is zinc oxide, in addition to it there is benzyl benzoate in the composition, which contributes to faster regeneration. Among the additional components can be noted lavender oil, which gives the product not only a pleasant aroma, but also strong anti-inflammatory effect.

Used for the treatment of mild and moderate diaper rash, as well as for the prevention of such as a cream for babies “under the diaper.”

Before use, it is recommended to treat the affected skin with hydrogen peroxide.

Antifungal drug with the same active ingredient. In case of childhood diaper rash, it is used in case of mycosis - adherence to fungal microflora inflammation.

In other cases, the use of external ointment is not considered appropriate. Cheaper analogue for antifungal action is "Nystatin ointment."

Such a tool should be prescribed by a doctor, the course of treatment usually does not exceed two weeks. In a newborn, it can cause side effects and allergic reactions. The cost of the drug is about 100 rubles.

Despite the fact that at the base of this ointment is methyluracil, which is included in many remedies for the treatment of diaper rash in newborns and infants, it is this ointment at an early age is undesirable. But it can be bought and left in the first-aid kit for the future - it perfectly heals wounds and disinfects the skin, but the drug is not recommended for children of the first year of life.

In the meantime, a tube of ointment is waiting in the wings for children's use, It can be useful for mom and dad - a tool used for burns, cuts, diaper rash and dermatitis, abscesses, cracks.

This drug is obtained by digestion of sheep wool to the state of medical lanolin. Contains no preservatives or aromatic additives.The composition is completely natural.

Used to prevent diaper rash, since lanolin creates a thin waterproof film, protecting the tender skin of the infant from the action of urine and feces. Produced in Switzerland.

It is like not only for the baby, but also for his mother - protects the nipples during cracking from lactation.

It is absorbed, according to reviews, well, does not leave stains on diapers and baby clothes. Not suitable for the treatment of diaper rash, severity higher than the first. A cheaper equivalent is “Lanovit”. Similar in action are creams and mousses for children's skin "Sanosan".

Experienced mothers are always ready to share their recipes for the health of children's priests. The most enthusiastic reviews on the thematic forums are from the manufacturers of Mustel, Bubchen, Sanosan. Among the remedies for eliminating inflammation, Bepanten Plus and Desitin are good reviews.

Also moms advise change the brand of diapersIf diaper rash recurs frequently, do not bundle or overheat the child, since sweating with any treatment means creates an excellent environment for the inflammatory process of thin and delicate baby skin.

Peach oil for children: how to use

Choosing a stand under the bath for a newborn

Choosing bed linen in the crib for a newborn

How to choose a mattress for changing?

Swaddling board: types and rules of choice

What kits in the crib for newborns are and what set to choose?

Slides for bathing newborns: types and tips for choosing

Baby oil: tips on choosing and applying
Information provided for reference purposes. Do not self-medicate. At the first symptoms of the disease, consult a doctor.