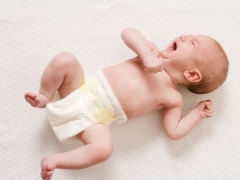 For the assessment of the health of the newborn infant, unconditioned reflexes are of great importance. By their manifestation or absence, it is possible to judge whether everything is in order with the crumb and whether the little one needs additional examination and treatment. One of the important congenital reflexes of a newly born child and a rising infant is the Moro reflex.

The Moro reflex is one of the unconditioned reflexes that appear immediately after birth (you can see it when the obstetrician treats the crumbs). He was first described by the German pediatrician Moreau in 1918, in whose honor automatism was named. It is important to understand that this is not a pathological reflex, but an absolutely normal reaction of a healthy newborn.

More information about the reflexes of the newborn can be found in the following video.

How to cause and evaluate the reflex

To invoke the Moro reflex, you can:

The reaction to such techniques is divided into two phases:

How to assess the reflex and why the baby should be swaddled, see the next video.

Because of such manifestations, this reflex is also called the startle reflex. He often appears during sleep if the baby is frightened by any noise, for example, a pet or the sound of a car from an open window. It can also occur during sudden movements of an adult whose baby is in his arms. It does not harm the toddler, but can cause prolonged crying.

It is important to note that the reflex manifests itself symmetrically on both sides, that is, the crumb lifts and spreads both hands equally. In healthy babies, the preservation of the Moro reflex is noted up to 3-5 months of age, after which it gradually fades away. In babies older than 5 months, only individual components of such a reflex are normally noted.

Remember that during the inspection, the crumb feels stress, as the baby gets scared because of the fall and he tries to save himself by clinging to the mother or the surface. Even if it seems to you that it looks very funny, you should not provoke the appearance of such a reflex specifically, if it is not required for a medical examination of the crumbs.

To eliminate the frequent occurrence of the reflex, it is advised:

Identifying problems on the Moro reflex

What if he is missing

Since this situation most often arises due to brain damage or conductive nerve paths, it is important to immediately assess the condition of the newborn and conduct the necessary examinations in order to identify problems with the nervous system in time. As a rule, the lack of a reflex after birth is immediately noted by the doctors and becomes the cause of a more thorough examination of the crumbs and testing of other reflexes.

If the reflex is manifested only on one side, then the doctor should examine the shoulder and collarbone of the newborn in order to rule out the situation of their damage during childbirth. If the mother found deviations in the manifestation of such a reflex after discharge from the hospital, she needs to tell her pediatrician about her doubts.

A medical examination is also shown when the Moro reflex is preserved in children who are six months old. Sometimes the cause of this situation is an increased muscle tone, which is a reason to appoint the baby a course of massage.

Why do babies and babies often sneeze?

Features and the volume of the stomach of a newborn

How to swaddle a newborn?

Newborn screening
Information provided for reference purposes. Do not self-medicate. At the first symptoms of the disease, consult a doctor.