Hiccups in newborns and infants: causes and ways to stop 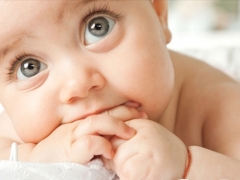 In adulthood, hiccups are a fairly rare occurrence that can be easily managed. But with the appearance of this symptom in the newborn, many parents begin to experience and do not know how to help the baby and eliminate such a condition.

A symptom, such as hiccups, appears when the diaphragm shrinks, to which its stimulation and irritation leads. Note that at an early age, this muscle, which separates the abdominal cavity from the chest, is especially sensitive to any irritating factor, therefore the appearance of hiccups in infants is noted quite often.

Hiccups can be called completely normal and natural for a newborn baby, because for the first time in many babies it appears during intrauterine development. Such a hiccup often lasts several minutes (not more than an hour) and in most cases does not interfere with the toddler.

To its appearance leads:

If the hiccups do not stop for a long time, and in addition to this symptom, the crumbs have a cough or regurgitationwhile the baby behaves restlessly, it can be suspected of the disease of the esophagus or stomach.

What to do: how to stop the hiccups and get rid of it?

If hiccups do not bring the baby any discomfort, nothing is required. In cases where such a symptom causes anxiety in the crumbs and prevents him from falling asleep, parents can struggle with the onset of hiccups by distracting the baby and calming him down.

Since there are no effective ways to remove hiccups in newborns (when compared with methods of dealing with this symptom in adults), it is best to prevent its occurrence:

The well-known pediatrician calls the most frequent causes of hiccups quick swallowing of food, drying of mucous membranes, overeating and delayed release of the intestines (constipation and bloating). He notes that you should go to a doctor with hiccups, which have lasted for three hours, and also in the case of a combination of symptoms such as hiccups and abdominal pain.

As for ways to remove hiccups from babies of the first year of life, Komarovsky advises not to allow overeating, to air and wet the room, or to go for a walk with fresh crumb to the fresh air.

When does a newborn begin to see and focus?

Why do Bepanten is applied to a baby under a diaper and how to do it correctly?

What is neurosonography in newborns and infants, how is it performed and what does it show?

Newborn eyesight
Information provided for reference purposes. Do not self-medicate. At the first symptoms of the disease, consult a doctor.