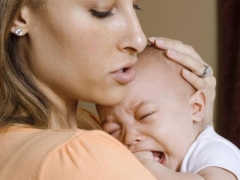 Colic is considered one of the most pressing and unpleasant problems in life. newborn baby. So called pain in the tummy, from which babies suffer in the first months after birth. Their occurrence is associated with the immaturity of the digestive tract of the newborn baby. Most often, these pains appear two to three weeks after birth, while the child is completely healthy, develops normally and eats with appetite.

The appearance of colic is facilitated by such factors:

A kid with colic can be helped by:

Massage the tummy for the prevention of colic is advised both before and after feeding. Movement of my mother's hands with this massage should be circular - move your arm around the navel in a clockwise direction.

E. Dudnik - teacher of children's massage at the Institute of Professional Massage - in the next video shows the correct tummy massage technique for infantile colic.

Will the hot water bottle save?

The heat on the tummy area often helps to save the baby from painful cuts, therefore use of hot water bottle during an attack of colic justified. A hot water bottle filled with hot water should be wrapped with a thick towel and placed on a toddler's belly. At the same time, pat the baby on the back.

Use of colic is most often recommended. dill or fennel infusion. The proportions for the preparation of such funds are: a teaspoon of seeds in a glass of water, brought to a boil. Means insist about half an hour, and give a dose of 1 teaspoon before meals three times a day.

In addition to dill or fennel tea, it is advised to drink crumbs with colic and chamomile tea. A teaspoon of dried flowers is poured with boiling water (250 ml) and infused for about 30 minutes. Infusion offer crumbs in the form of heat of about 20 ml before the morning and evening feeding.

Also, people advise bathing babies who are suffering from colic in herbal baths. In a warm bath, which the crumb will take before bedtime, most often add mint, lemon balm or motherwort.

All drugs that are used for the appearance of colic in a newborn baby are divided into 2 large groups:

Also, the doctor may advise you to give your child preparations with probiotics (bififormlinex bifidumbacterin and others) and enzyme preparations (Creon, Mezim).

About what you need to do to help your baby with colic, see in the video of Larisa Sviridova.

When babies are colic?

Most babies have colic episodes by the age of 3 months. In some babies, colic continues until the age of 4-5 months, but almost all karapuz after six months have no colic anymore. If an attack of colic appeared in a six-month-old child or older children, you should always consult a doctor.

The famous pediatrician confirms that colic occurs in approximately 70% of babies from the third week of life and often pass by the age of 3 months. Komarovsky reminds that this is a temporary problem that is not a disease and is not dangerous for children. In his practice, a popular doctor noted that colic appears more often in newborn boys, and they pass later than in girls.

The main factors increasing the likelihood of colic in infants Komarovsky calls overfeeding and overheating. In addition, Komarovsky emphasizes that it is impossible to affect infant colic with medicines. At the same time, he calls the use of dill water and drugs against gazovku though useless, but safe methods.

Regarding the diet of a nursing mother, Komarovsky believes that a change in mom's diet does not affect the appearance of colic. But a dream on the tummy of a well-known doctor categorically does not recommend, calling this method of dealing with colic very dangerous.

For more on this, see the transfer of Dr. Komarovsky.

To prevent the occurrence of colic attacks in babies, it is recommended to pay attention to:

Crumbs with bouts of colic should show a doctor to rule out serious diseases in which abdominal pain is possible.

In addition, the mother needs to calm down and realize that this problem is temporary and physiological. You do not need to consider yourself a bad mom and get depressed if no methods of dealing with colic are effective.Share your experiences with the same moms on thematic forums or with friends who have kids. Watch the themed videos of pediatricians, but the main thing is to have patience.

Can a newborn sleep on his back?

Free and tight swaddling: what is the difference and what is better?

Brain hemorrhage in the newborn

Why is there a poker (bristle) in newborns and how can it be removed?
Information provided for reference purposes. Do not self-medicate. At the first symptoms of the disease, consult a doctor.