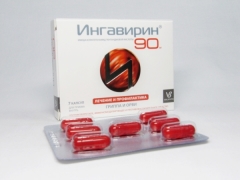 To combat viral infections, drugs that can affect viral particles are used. They inhibit their reproduction, destroy viruses or stimulate the immune system so that it can overcome the pathogen.

One of the drugs with this effect is Ingavirin. This drug is produced by the Russian company Valenta Farm, offering customers the drug in two dosages, the smaller of which is recommended for children. When such a drug is prescribed, how does it affect the body of the sick child and how should it be taken correctly? 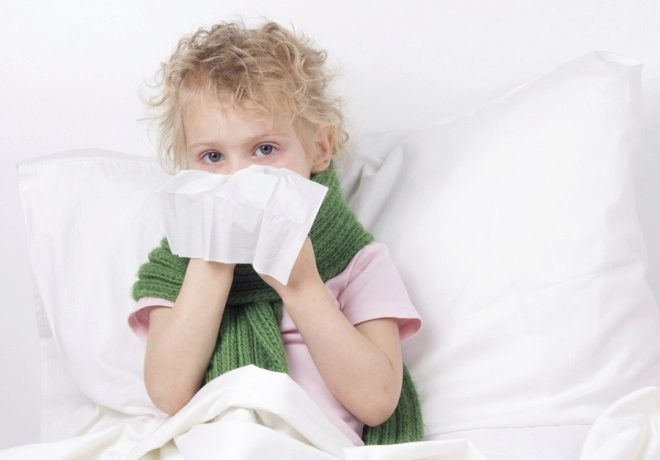 Ingavirin was developed in the late 70s of the last century in order to create an allergy medication. As a result of many studies and tests, it was revealed that the innovative medicine has the ability to influence the immune system. It is also worth mentioning that until 2013, the active ingredient Ingavirin was used to create another medicine that stimulates the formation of white blood cells - Dicarbamine. Now the manufacturer produces only Ingavirin. 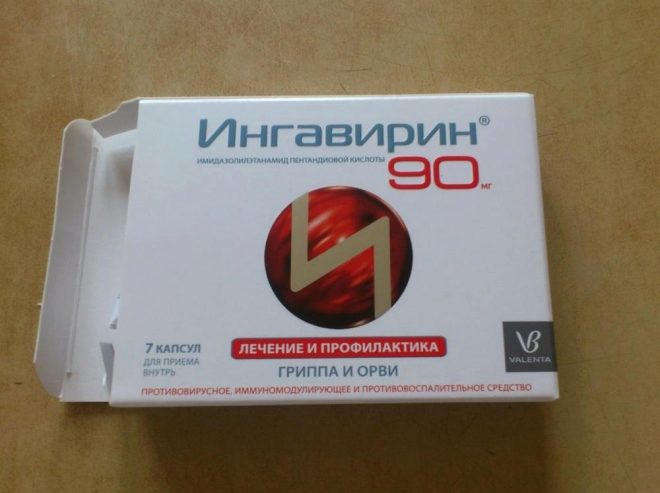 Ingavirin for children produced in capsules, packaged in one pack of 7 pieces. They are yellow and marked with the letter I in white, surrounded by a white ring. The internal contents of the capsules are white powder. It can form lumps that easily fall apart when pressed.

In addition to the children's version, the drug is also available in a higher dosage. This Ingavirin is intended for adults and contains 90 mg of the active ingredient in a single red capsule. Earlier, blue capsules with the active substance in a dose of 30 mg were also produced, but now such a drug is not produced. 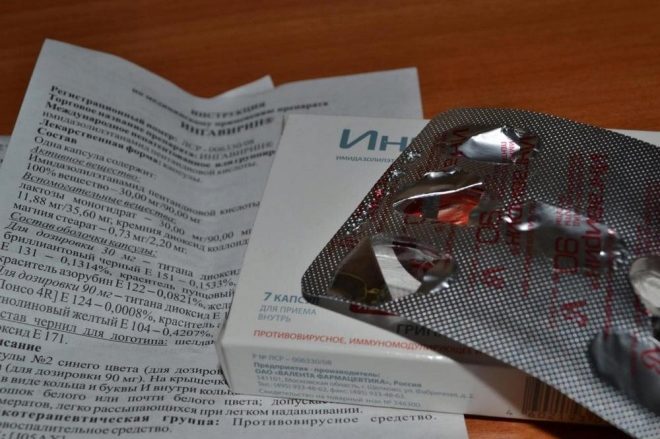 The action of Ingavirin is provided by a compound called imidazolyl ethanamide pentadionic acid. Such a substance has another, shorter name - vitaglute. It in the preparation for children contains 60 mg in one capsule.

Potato starch and lactose monohydrate are added to this component, as well as magnesium stearate and colloidal silicon dioxide. All these ingredients are placed in a dense shell of gelatin, which is composed of the dye E172 yellow and titanium dioxide. For the inscription on the capsule using propylene glycol, titanium dioxide and shellac. The presence of such components is important to consider when choosing drugs for allergy sufferers. 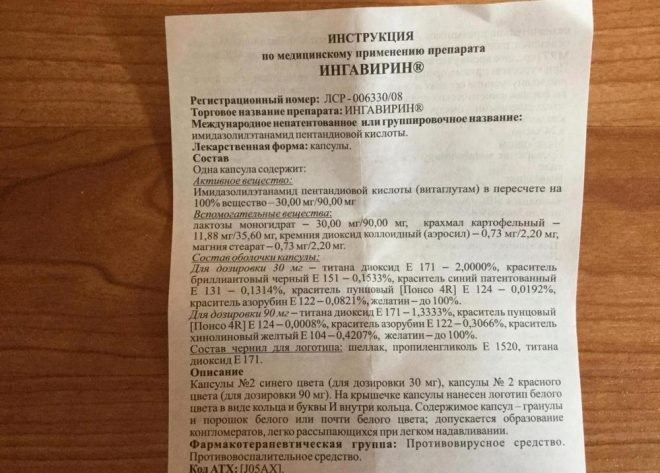 Ingavirin is a group of antiviral drugs.

Studies have shown the activity of this drug when infected with influenza viruses, including dangerous strains such as H1N1. In addition, the drug affects parainfluenza viruses, adenoviruses and respiratory syncytial viruses, and preclinical experiments have confirmed its effect on enteroviruses, rhinoviruses, metapneumoviruses, coronaviruses and Koksaki viruses.

Intake of Ingavirin not only helps to remove these types of pathogens from the body of a sick child, but also reduces the duration of infection and reduces the risk of complications of the disease. The action of vitaglutam is primarily based on the stimulation of the affected cells. In particular, this substance stimulates immunity factors that are suppressed by viruses in an infectious disease.

As a result of capsules, the number of receptors for interferon increases, which increases the sensitivity of infected cells to this factor of the immune response. Besides, The drug acts on proteins that give cells signals to activate antiviral genes. And due to the effect of the drug on the movement of ribonucleoproteins inside viral cells, reproduction of the pathogen slows down.

The level of interferon during treatment with Ingavirin rises to normal, as the drug affects the white blood cells and restores their ability to produce immune factors. It is also noted that taking capsules increases the number of white blood cells responsible for the destruction of viral particles, and the anti-inflammatory effect of the drug is associated with the suppression of the production of substances called cytokines. 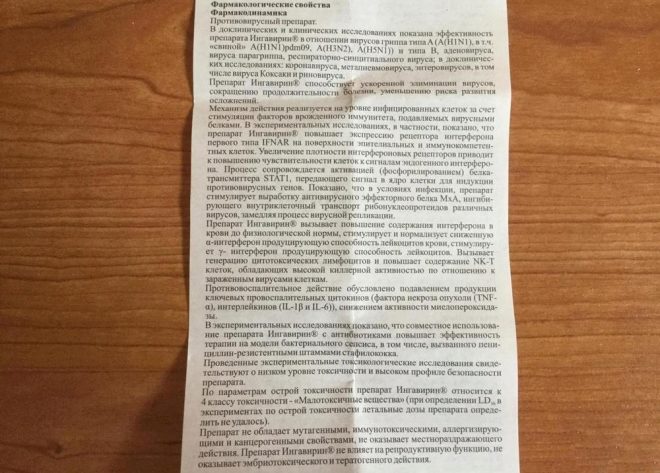 About the features of the use of antiviral drugs, see the transfer of Dr. Komarovsky.

Ingavirin in a children's dosage is prescribed: 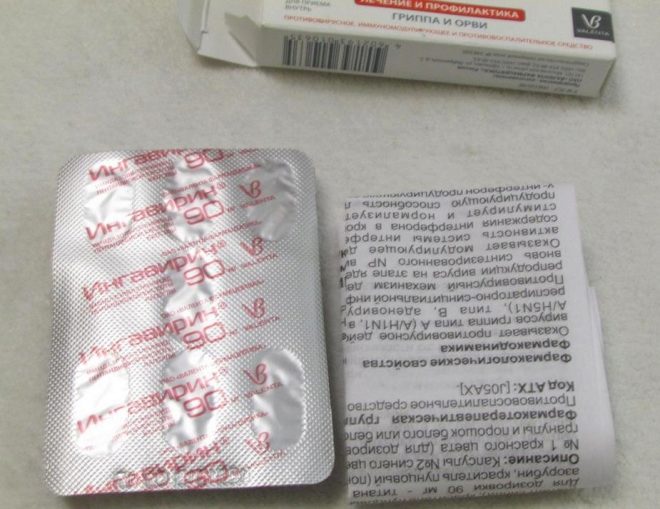 Ingavirin for children containing 60 mg of the active ingredient in a capsule, appointed from 7 years to 17 years of age.

The drug with the content of vitaglutam dose 90 mg per capsule should not be given for therapeutic purposes to children under 13 years of age..

For the prevention of medication with an adult dosage is prescribed only from 18 years. 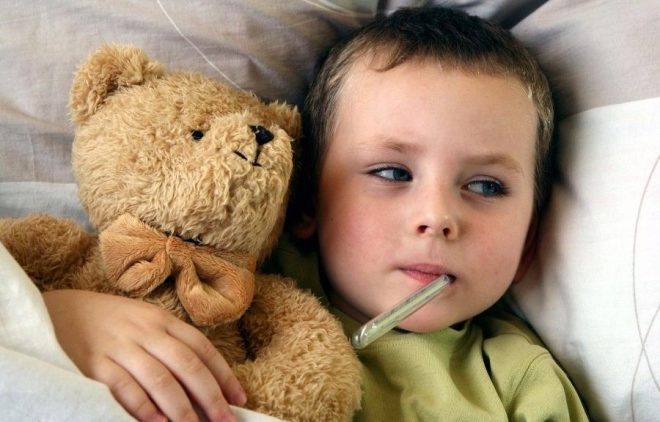 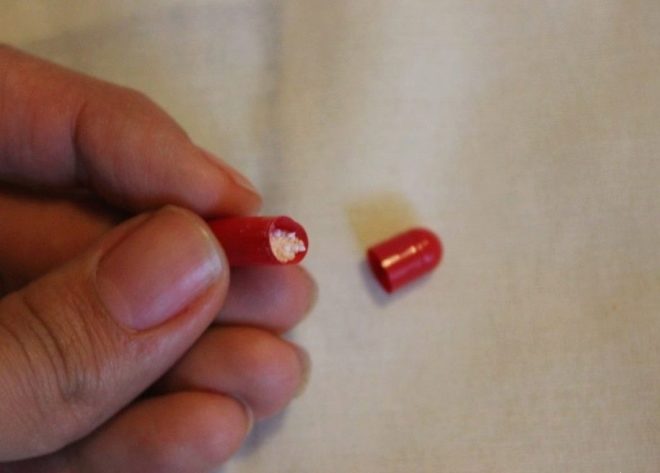 The drug is considered safe and low toxic. According to studies, it has no immunotoxic, carcinogenic or mutagenic properties. Receiving capsules does not cause local irritation, and also does not affect the development of the fetus or reproductive function. The only possible side effect of Ingavirin is an allergy to its components. 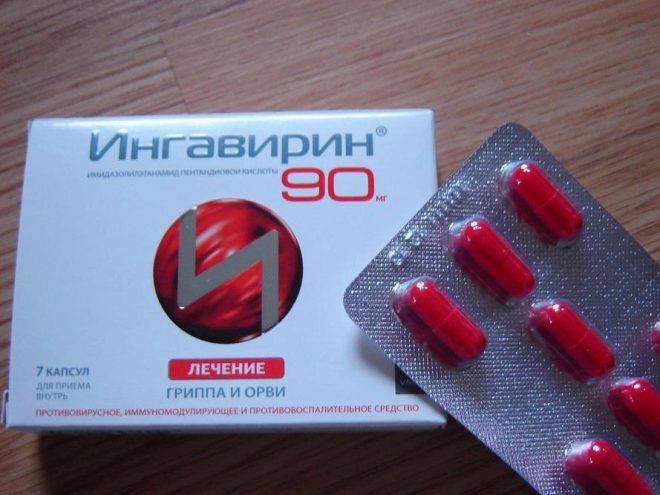 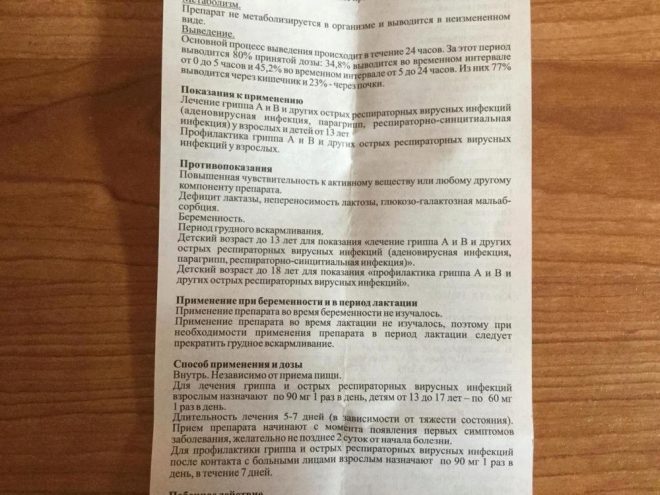 To date, no adverse effect of an overdose of capsules has been reported.

You can buy Ingavirin in pharmacies without a prescription. On average, the price of one pack of the drug with a child's dosage is 360-400 rubles. 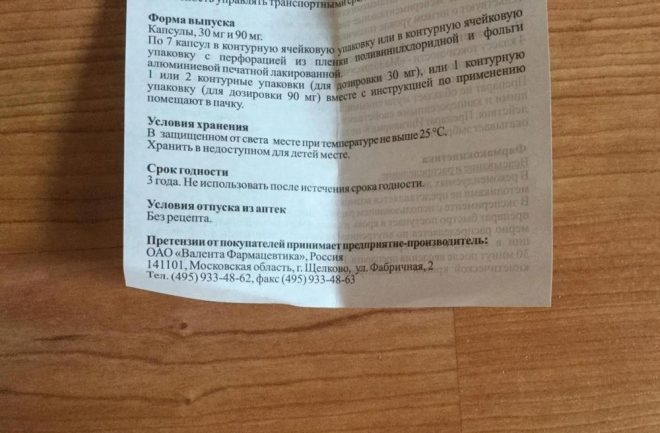 Keep Ingavirin orphanage at home is advised in a dry place where the temperature will not be above 25 degrees Celsius. Free access in small children to such capsules, as well as to other medicines, should not be. The shelf life of the drug - 3 years.If it has expired, giving expired capsules to children is unacceptable. 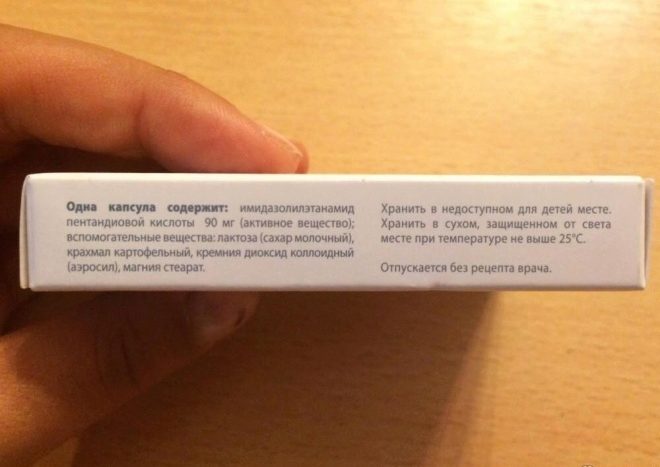 On the use of Ingavirin in children with ARVI there are different reviews. In positive mothers note that taking capsules helped to eliminate catarrhal symptoms, fever and other signs of intoxication. According to parents, children who were given medicine from the first days of the illness had a faster temperature decrease, and symptoms such as nasal congestion, sore throat, painful swallowing or a runny nose soon disappeared. This is also often noted in the reviews of medical specialists.

Although the price of the drug, many parents call high enough, but mothers are pleased that one pack in most cases is enough for the full course of treatment. They praise the medicine for ease of use (a capsule should be taken only once a day), and for availability in pharmacies, and for a minimum of side effects (allergy to the drug occurs in very rare cases).

In this case, there is also a rather large percentage of negative reviews. The main complaint is the inefficiency of the drug. Parents complain that the child, despite taking capsules, was still sick with the flu or another infection. 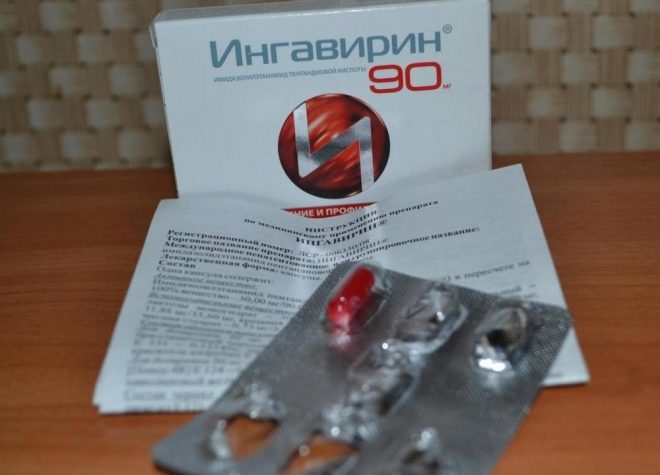 Kagocel. Such tablets of the domestic manufacturer are often prescribed for flu, herpes, SARS and other infections. At children's age they are used from 3 years. 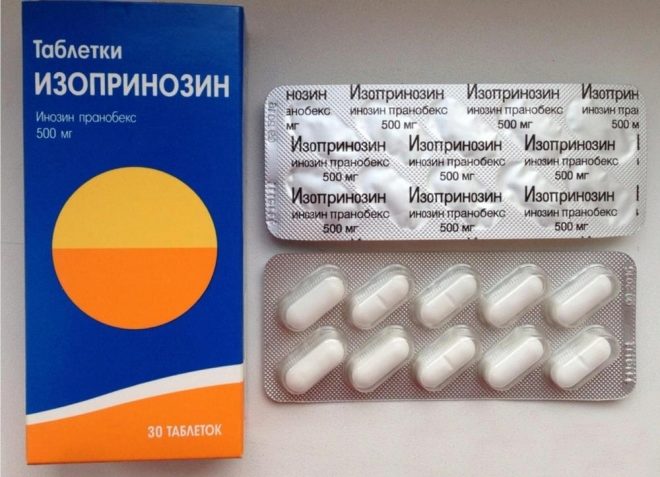 In addition, interferon preparations can be prescribed to children with acute respiratory viral infections or flu, among which Viferon, Genferon Light and Grippferon are very popular. They not only very effectively cope with viruses that affect the upper respiratory tract, but also help with rotavirus infection, candidiasis, infections of the urinary organs, and many other diseases.

In some cases, mothers decide to replace Ingavirin with homeopathy and buy Ergoferon, Aflubin, Anaferon and similar products for children. However, pediatricians warn that homeopathic medicines cannot fully replace antiviral drugs, because they have a completely different mechanism of action.

In the next short video, Dr. Komarovsky explains what needs to be done in order to improve the immunity of the child.

Tablets "Cycloferon" for children: instructions for use

Relenza for children: instructions for use

Grippferon for children: instructions for use

Groprinosin for children: instructions for use

Remantadin for children: instructions for use and reviews

Orvirem for children: instructions for use

Acyclovir for children: instructions for use

Tsitovir-3 for children: instructions for use

Arbidol Children
Information provided for reference purposes. Do not self-medicate. At the first symptoms of the disease, consult a doctor.