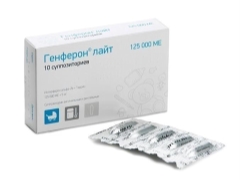 Among the drugs that affect the immune system of the child, Genferon Light is quite popular. From what age do they prescribe this medicine in candles, how does it affect the immunity of babies and is it used for prophylaxis? 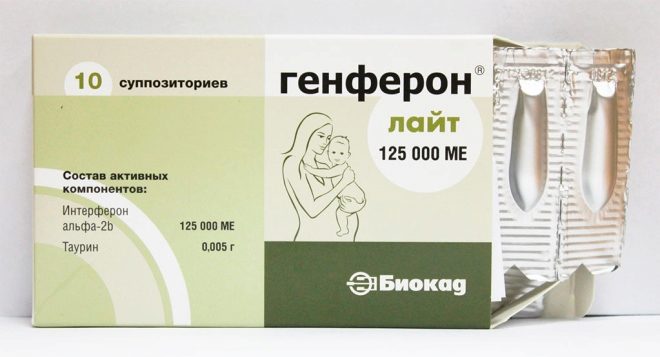 One pack of Genferon Light includes 5 or 10 rectal / vaginal suppositories. They have a cylindrical shape and a pointed end. The color of the candles is white, but the preparation may have a yellow tint. Usually, the structure of the drug is homogeneous, but inside there may be a recess in the form of a funnel or air rod.

The drug is also released in liquid form, which is a spray in the nose. One dose of this medicine contains 50000ME active ingredient, and the vial contains 100 doses. There is also Genferon medication, but it differs from Genferon Light preparations and composition (it contains benzocaine) and interferon concentration, so it is not used in children under 7 years of age.

The composition of candles includes two active components at once. One of them is alpha-2B interferon. It can be contained in one suppository as 125000 IU, and 250000Е. The second ingredient is taurine. Regardless of the dosage of interferon, it is presented in the amount of 5 mg of medicine per candle.

Among the excipients of the drug can be seen purified water, solid fats, citric acid and T2 emulsifier. There are also substances in the composition of the drug, such as polysorbate 80, macrogol 1500 and dextran 60,000. All these components are added during manufacture to produce candles weighing 0.8 g.

The drug belongs to the means with immunomodulatory effects. In this case, the drug affects both locally and systemically, since more than 80% of interferon is absorbed from the suppositories and enters the bloodstream. The maximum concentration of this substance in serum is determined approximately 5 hours after the drug is administered rectally, and its half-life occurs 12 hours later.

Listen to the opinion of the doctor about the candles "Genferon Light."

Due to the presence of interferon in the composition, suppositories have antiviral and antibacterial effects. Their use activates some enzymes inside the cells, which will result in the inhibition of the reproduction of viruses.

The effect of suppositories on the patient’s immune system is to enhance cellular responses to viral invasion or penetration of intracellular parasites, thereby making the immune response more pronounced. The drug activates T-killers and natural killers, and also affects B-lymphocytes and their ability to produce antibodies.

The use of candles affects the activity of phagocytosis and macrophages. In addition, leukocytes activated under the influence of interferon more quickly eliminate the pathological foci in the mucous membrane, and the production of IgA is restored. 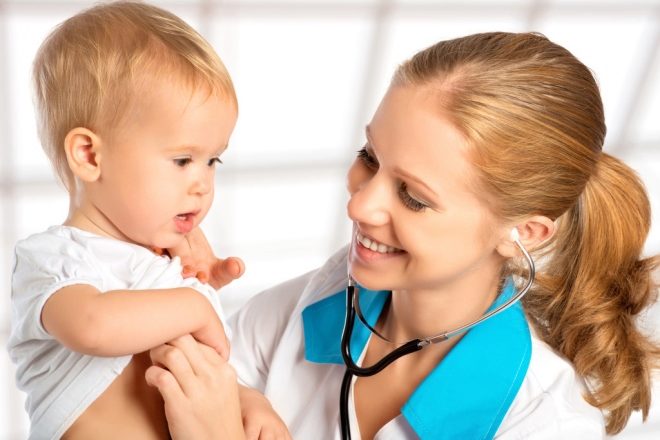 The second component of the drug - taurine - normalizes metabolic processes and promotes tissue repair. Such a substance has the ability to stabilize membranes and antioxidant action. In addition, it supports the biological activity of interferon, due to which the therapeutic effect of suppositories is further enhanced. 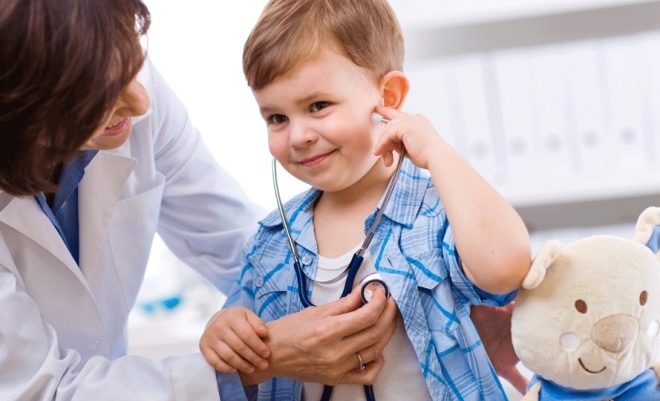 Genferon Light is prescribed to the child:

The use of candles Genferon Light in children is possible from birth, even with prematurity. At the same time, for the smallest patients, the drug is prescribed at a dosage of 125000 ME, which is often called a pediatric. Medication with 250000ME, like Genferon suppositories with the same dosage, can be used from 7 years of age. Spray form is not prescribed to children under 14 years of age. In addition, under the age of 14 years, vaginal administration of medication in candles is not recommended.

The drug should not be used when it is found that a small patient is intolerant of taurine, interferon or other candle ingredients. The manufacturer does not indicate other contraindications to the use of the drug, however, for autoimmune diseases or allergies, the use of Genferon Light requires caution and expert advice. 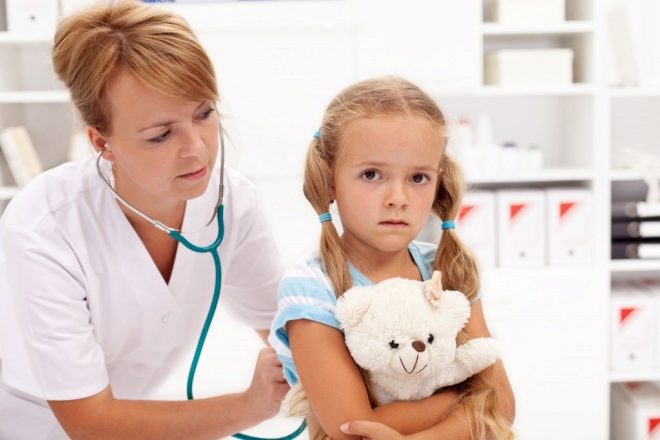 Application Genferon Light may provoke an allergic reaction, such as burning or itching. Such negative symptoms are usually reversible, and as soon as treatment is stopped, they disappear completely within a few days.

Occasionally, treatment can cause fatigue, chills, headaches, sweating, fever and other symptoms. When they occur, the administration of suppositories is advised to stop and consult with your doctor regarding the reduction of a single dosage or replacement with another drug. If the child has a fever after the candle has been injected, a single dose of 250 mg of paracetamol is prescribed.

According to the annotation, the candle can be inserted both into the rectum and used vaginally. The doctor determines the dosage, method of application and duration of therapy in each case individually. In this case, the most commonly used schemes are:

See how to insert a suppository in the next video.

The manufacturer does not have data on the negative effects of high doses of Genferon. If by chance suppositories were introduced into the rectum in larger quantities than the pediatrician prescribed, a 24-hour break should be taken. After a day, the therapy can be continued according to the regimen recommended by the doctor.

Candles are often prescribed as one of the drugs for the purpose of complex treatment of the disease, therefore Genferon Light can be combined with antiviral, antifungal and antibacterial drugs. It is noticed that in such a combination, the medicaments enhance the effect of each other. 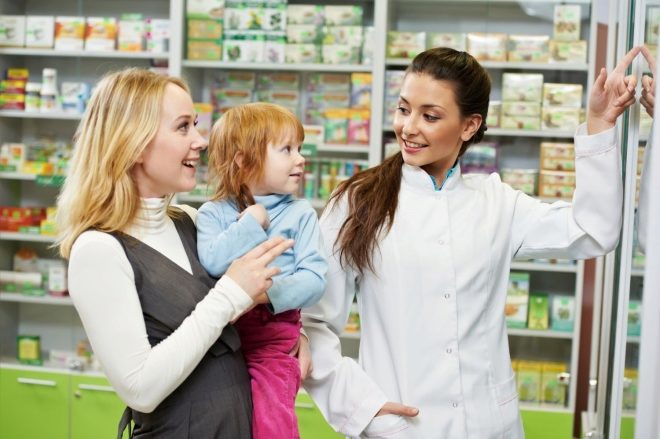 Recommended temperature conditions for storing candles Genferon Light home is the range from +2 to +8 degrees Celsius, that is, the drug should be kept in the refrigerator. If the drug has expired (it is 2 years), then it is unacceptable to use it for treating a child.

About the treatment of children with candles Genferon Light meets a lot of good reviews. In them, mothers note that the drug helped to quickly get rid of a viral disease, and the child endured this medicine without any unpleasant side symptoms. However, negative reviews can also be found when the drug did not have the desired effect, which was often associated with a severe course of the disease.

Replace Generon Light can other drugs that contain alpha interferon, for example:

For viral diseases, instead of or in addition to Genferon, your doctor may recommend antiviral drugs, such as tablets. Kagocel or syrup Orvirem.

It should also be mentioned that some mothers prefer to treat children with homeopathy, for example, they give the child homeopathic remedies like Aflubin or Anaferon instead of interferon preparations. However, doctors, among whom is the famous pediatrician Komarovsky, do not consider them an adequate substitute and doubt their effectiveness. 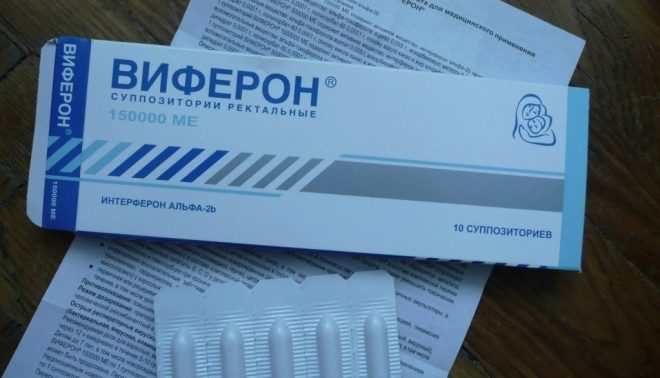 Dr. Komarovsky about the means of ORVI for children

Rimantadine for children: instructions for use

Spray "Panavir" for children: instructions for use

Nomidez for children: instructions for use

Novirin for children: instructions for use

Acyclovir for children: instructions for use

Antiviral nasal drops for children
Information provided for reference purposes. Do not self-medicate. At the first symptoms of the disease, consult a doctor.