Stuttering in children: causes and treatment 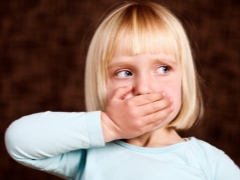 Stuttering (logoneurosis) is an unpleasant and frightening speech disorder to which children are prone. But it is curable, and quite effective. This is evidenced by statistics. About 4% of children suffer from stuttering. And the same speech disorder occurs only in 2% of adults.

The formation of children's speech function is a very complex process, during which various failures can occur. The most common speech disorder is stuttering. It can be caused by a mass of reasons. Stuttering manifests itself quite early, and timely reaction of parents is the key to success in overcoming the problem.

If you do not pay due attention to this, the child may have great difficulties in social contacts, he will close, will not be able to fully build relationships with people and successfully study at school.

Defect speech in children can be caused by multiple factors - both external and internal. If the baby began to stutter from an early age, at 2–3 years old, it is likely that sources should be sought in violations of brain functions. These will be congenital causes:

If the child first spoke normally, and he began to stutter only at the age of 4 or at the age of 5-6, this may indicate an adverse external influence on the speech function.

Such stuttering is considered acquired:

This release of the transfer from a qualified doctor will tell you what can be the trigger of stuttering in children.

To determine the cause of stuttering will help closely monitor the child. If he begins to stutter only in a nervous or stressful situation, when he is very worried, in the presence of outsiders, this may indicate an acquired stutter, a neurotic, neurosis-like one. With such a violation of speech in a calm and well-known atmosphere, the baby usually pronounces everything quite normal.

If stuttering is permanent, independent of external factors (weather, the presence of strangers, the excitement of the child), then it is probably the cause of a disturbance in the malfunctioning of the brain, a lesion of the speech center.

Boys are 4 times more likely to stutter than girls.

Signs of stuttering - the main thing to notice on time! We suggest you look at the story of one child, in particular a practical lesson as a boy being treated for stuttering.

Usually stuttering a child is quite effectively amenable to correction. The main thing - as soon as possible to identify the cause of the defect of speech, and eliminate it. The first thing that parents who have noticed a beginning stutter at their toddler have to do is to calm down. You should not show the kid that you are frightened or irritated by his lack. It is better not to focus attention on the unsuccessful attempts of the crumbs to argue something. Just watch and look for the cause.

We offer to your attention a very interesting, and most importantly useful video of Dr. Komarovsky about children's stuttering.

Regardless of whether the original source was able to detect the problem or not, the child should be shown to a neurologist, speech therapist, psychologist, and sometimes a psychotherapist. It is better to begin the examination with a pediatrician's consultation, do not be surprised if he gives a referral to a child psychiatrist. Specialists will conduct the necessary diagnostics, help to figure out what has become the "trigger mechanism" of stuttering and tell you what to do next.

Get ready for the examination to be pretty impressive. In addition to conversations with the child, evaluating the manifestations of his psychosomatics, doctors are likely to prescribe an EEG and MRI of the brain. With the data of these diagnostic methods, the picture will be more complete.

Treat stuttering in children in different ways. Drug treatment is quite effective, but without psychotherapy does not lead to the desired result. The method of hypnosis, which the psychotherapist can offer to the parents of the child, is contraindicated for most children, usually it is recommended to adolescents. Definitely one can only say that the treatment will be purely individual, selected according to the results of the survey, taking into account all the personal characteristics of the child and the reasons that caused the speech disorder.

Parents should prepare for the fact that treatment will be complex and quite long, fix stuttering is not easy. During the whole therapy, it will be necessary to strictly follow every prescription and recommendation of doctors every day. It is a great desire to get rid of stuttering, everyday joint work with the child, dedication and firm belief in victory will help the child overcome the problem and live a full life.

We also offer you to listen to the lecture of S. B. Skoblikova about children's stuttering.

A pediatrician, psychiatrist, neurologist and psychologist will help to determine the true causes of stuttering. But to treat a child from him will be a speech therapist - a defectologist. Contact this specialist will have quite often. He will become almost a friend of your family. Modern speech therapy allows you to choose an individual correctional program for your baby.

Speech therapist will explain to parents the basic principles and give exercises that will need to be performed at home. With a certain frequency, you and your child will show a speech therapist how much success you have achieved.

Speech therapy techniques are based on the normalization of breathing and rate of speech. All classes are conducted using the game activity. Doctors stuttering kids recommend singing songs, reciting poems, and practicing rhythm. Very often speech therapists insist that parents record a child in a choir. This allows you to train the speech apparatus, and during singing, as you know, speech defects are imperceptible, the stuttering completely disappears.

Gradually, in the game, the kid begins to overcome the barrier that prevents him from uttering words, and his speech acquires a normal pace.

To achieve the result, treatment procedures will also be needed. Since stuttering is a complex problem, the approach to it will be the same. The recommendations of the doctors here are pretty standard.

A lesson on speech therapy techniques, the assimilation of speech material will be complemented by massage sessions. Massage will be aimed at relaxing, improving blood circulation. The goal - to remove the spasms of the speech apparatus on the physical level, relaxation. The areas to which the massage therapist will pay particular attention when correcting speech impairment - neck, lips, shoulder girdle, larynx, facial muscles. They, as a rule, are in good shape, clamped in children with speech problems.

Video articulation massage as an aid to stuttering children.

Most often in the correction of children's stuttering, the Strelnikova technique is used. The main goal is to form correct and effective breathing, in which the blood supply to the whole organism as a whole and speech organs in particular will significantly improve. During the lessons, the child will be able to teach words to be spoken on the exhale, this will help him to pronounce them entirely, not splitting into syllables or individual sounds.

It is better if you do gymnastics according to the Strelnikova method under the supervision of an experienced physiotherapist, since many of the exercises in her system are quite difficult for the child, the baby may get tired, if done at home, he may have high blood pressure and headaches.

We offer to your attention a training video lesson of respiratory gymnastics according to the Strelnikova method.

Hypnosis is suitable only for children of middle and high school age with a fairly stable psyche. For the correction of speech problems, the method can be used only if the child is susceptible to the hypnotic influence of the psychotherapist. Many kids, alas, are unbearable.

Hypnosis has its advantages - with a trance state, the child is able to discover the true cause of the disturbance in his speech, this makes it possible to quickly find out what frightened him or became a stress factor.

We offer a video about the treatment of stuttering hypnosis, and the actual test results.

Doctors try to treat stuttering with medicines only in the most difficult cases, when the child has serious mental and nervous disorders. In such cases, the doctor prescribes tranquilizers, anticonvulsants drugs. Light sedatives can also be prescribed for mild stuttering. What medications can be prescribed for stuttering?

If the speech disorder is minor and is not caused by serious problems of the psyche or nervous system, the doctor may recommend adding phytotherapeutic agents to the main correction.

Herbs that have a calming and relaxing effect - chamomile, sage, lemon balm, oregano, lime blossom, motherwort, lavender, mint. Teas based on them can be prepared independently, or you can buy it in finished form at any pharmacy. Bath decoctions are made from the same herbs.

It is important to know that herbal medicine is not as harmless as it seems to many parents, and therefore the dosage, the duration of the course of taking herbal tea or herbal tea should be agreed with your doctor. Now, many children's sanatoriums offer whole health and medical courses of herbal medicine, which are designed to help save the child from stuttering.

Positive psychological background should be maintained after the course of treatment is completed, and stuttering will be a thing of the past. Otherwise, relapses are highly likely, under the influence of stress factors, the baby may begin to stutter again.

What are the predictions?

Of course, this is the main question that worries moms and dads. In most cases of neurosis-like stuttering with moderate psychosomatics, the forecasts are positive. This, unfortunately, cannot be said of genetic stuttering and speech process disorders associated with congenital causes.

Plays an important role and age of the patient. The stuttering in children aged from 3 to 5 years is most easily and naturally corrected. The sooner it is possible to understand that the child stutters, the sooner adequate measures are taken, the greater the chances of removing the stuttering once and for all.

If stuttering begins in school-age children, dealing with it will be somewhat more difficult. The treatment of a speech defect will be longer and more difficult in the case of stuttering, if the problem persists up to 9-11 years, the predictions of a favorable outcome are less favorable.

In the next video, Children's Doctor Dmitry Chesnov will "sort through" the problem of stuttering in children.

Prevention of stuttering in neurologically and mentally healthy children is quite simple and it consists in a good family relationship. Where there are no conflicts, quarrels, and there is love and understanding, a child has much less risk of becoming stuttering. Curing stuttering is more difficult than preventing. Stuttering a child sometimes manifests itself in order for parents to understand their own mistakes.

Wean't stutter, we can only help, to establish mutual understanding and cooperation with the child. And remember that love and faith in the ability of the baby creates real miracles that even traditional medicine is not always able to explain. Believe in your child, and he will succeed.

Learn about which causes and principles of treatment are distinguished by Dr. KomarovskyYou can from another article.

Stuttering in children: causes and treatment according to Komarovsky

How to cope with hysteria in a child? Effective advice of a psychologist

How to tell a child about divorce and survive this period? Psychologist tips

What to do if the child does not want to play sports: the advice of a psychologist

What to do if a woman wants, but is afraid to have a second child

Aggression in a child of 7 years: the advice of a psychologist

What to do if a child is hurt in kindergarten?

What if the child does not want to learn? Useful advice from a psychologist
Information provided for reference purposes. Do not self-medicate. At the first symptoms of the disease, consult a doctor.