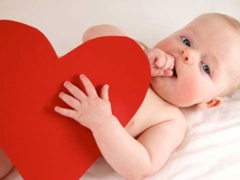 During the development of an infant in the womb, sometimes the processes of growth and formation of tissues and organs are disturbed, leading to the appearance of defects. One of the most dangerous are heart defects.

What is a heart defect?

So called pathology in the structure of the heart and large vessels that depart from it. Heart defects interfere with normal blood circulation, are detected in one out of 100 newborns and, according to statistics, are in second place for congenital abnormalities.

First of all, there is a congenital defect with which the child is born, as well as acquired, arising from autoimmune processes, infections and other diseases. In childhood, congenital malformations are more common and are divided into:

Most babies have heart defects that have developed intrauterinely, manifest clinically even during the stay of the crumbs in the maternity hospital. Among the most common symptoms noted:

Why are children born with a heart defect?

The exact causes of these pathologies, doctors have not yet identified, but it is known that violations of the development of the heart and blood vessels provoke such factors:

The period from the third to the eighth week of pregnancy is called the most dangerous period for the formation of heart defects. It was during this period that the chambers of the heart, its partitions, as well as the great vessels were laid in the fetus.

The following video tells in more detail about the causes that can lead to congenital heart disease.

For each child, the development of a heart defect goes through three phases:

It is possible to suspect the development of congenital heart disease in a child during routine ultrasound examinations during pregnancy. Some pathologies become noticeable to the doctor-uzist since the 14th week of gestation. If obstetricians are aware of the vice, they develop a special tactic for the management of labor and decide with cardiac surgeons the question of a baby’s heart surgery in advance.

In some cases, ultrasound during pregnancy does not show heart disease, especially if it is associated with a small circle of blood circulation that does not function in the fetus. Then you can identify the pathology of the newborn after examining and listening to the heart of the baby. The doctor will be alerted by the pallor or cyanosis of the skin of the toddler, a change in the heart rate and other symptoms.

After listening to the baby, the pediatrician will detect noises, splitting tones or other disturbing changes. This is the reason to send the baby to a cardiologist and appoint him:

Some babies for x-ray diagnosis spend x-ray, catheterization or CT.

In most cases, for heart defects in a newborn, he requires surgical treatment. The operation for children with heart defects is performed depending on the clinical manifestations and the severity of the pathology. Some babies are shown immediate surgical treatment immediately after the discovery of the defect, while others perform an intervention during the second phase, when the body compensates for its strength and is easier to undergo surgery.

If decompensation occurs during a defect, surgical treatment is not indicated, since it will not be able to eliminate the irreversible changes that have appeared in the internal organs of the child.

All children with congenital malformations after the diagnosis is clarified are divided into 4 groups:

The operation itself can be performed in two ways:

Before surgical treatment and after it, children with a defect are prescribed medicines from different groups, for example, cardiotonics, blockers and antiarrhythmic drugs. With some defects, the child does not need surgery and drug therapy. For example, this situation is observed with the double-leaf valve of the aorta.

In most cases, if you miss the time and do not perform the surgery on time, your child's risk of various complications increases. Children with vices have more frequent infections and anemiaand ischemic lesions may occur. Due to the unstable work of the heart, the work of the CNS may be disrupted.

Endocarditis, caused by bacteria in the heart, is considered one of the most dangerous complications in congenital malformations and after heart surgery. They affect not only the inner lining of the organ and its valves, but also the liver, spleen and kidneys. To prevent such a situation, children are prescribed antibiotics, especially if surgery is planned (fracture treatment, tooth extraction, surgery for adenoids, and others).

Children with congenital heart defects also have an increased risk of such complications of tonsillitis as rheumatism.

Forecast: how many children live with heart disease

If you do not promptly resort to surgery, about 40% of babies with defects do not live up to 1 month, and by the year about 70% of children with this pathology die. Such high mortality rates are associated with the severity of defects, and with the late or incorrect diagnosis of them.

The most frequent defects detected in newborns are the uncompressed arterial duct, atrial septal defect, and the defect of the septum dividing the ventricles. For successful elimination of such defects it is required to perform the operation in time. In this case, the forecast for children will be favorable.

You can learn more about congenital heart defects by watching the following videos.

Caring for a newborn baby

How to swaddle a newborn in the heat?
Information provided for reference purposes. Do not self-medicate. At the first symptoms of the disease, consult a doctor.