Understand the causes of urticaria in children 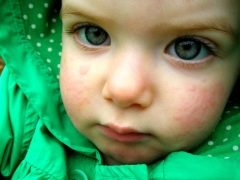 The appearance of urticaria in a child, especially in children under 3 years old, always raises questions from parents - because of what rashes appeared and what to do with them now? The reasons why the child can develop urticaria are numerous. Let's understand them.

Urticaria is one of the most common dermatoses in childhood. The name of the disease takes on the type of rash - it has a pink color, is accompanied by a slight swelling and in appearance is very similar to blisters from a burn when the skin comes into contact with nettle. Such a rash in medicine has another name - urtikarnaya rash.

It usually occurs due to the release into the blood of a large concentration of histamine.. It is formed and deposited in mast cells of mast cells. As soon as the child has contact with the allergenic substance, the mast cells begin to dispose of histamine deposits and throw it into the bloodstream. The capillaries become more fragile and the intracellular fluid begins to seep into the more superficial layers of the skin. And characteristic blisters are formed.

The danger of urticaria lies in its rapid, lightning-fast development. The rash appears very quickly, and the more it is spread on the body, the worse the condition of the child.

In severe cases, the urticaria has a swollen form and is accompanied by angioedema — Quincke edema, which can cause acute respiratory failure, hypoxia, and asphyxiation.

What is caused by?

Since the development of the nettle rash is based on the histamine release mechanism, the most common cause of its occurrence lies in allergies. First of all, food allergies should be assumed, especially if the child was eating a new product a few hours ago.

An acute allergic contact form has a more rapid development - a rash can appear within a few minutes after contact with a dangerous substance or allergen. Sometimes this is how a hives develops in response to insect bites.

An allergic reaction of the first type with a massive urticaria and other unpleasant symptoms develops sometimes with errors made by the medical staff during blood transfusion. The same rapid response may be a manifestation of individual intolerance to the components of the vaccine during the next vaccination.

If the child did not have a diet of new products, did not inoculate him, did not transfuse blood, he does not have access to chlorine-containing products and household chemicals, paints and varnishes, other forms of allergy should be assumed, more rare - for example, to cold or sunlight , on vibration or water.

In search of the cause, in about a third of cases it has not been possible to establish what caused the urticaria. It happens that several factors are combined and it is not possible to determine what is paramount.

Many mothers and grandmothers argue that children, in the intestines of which parasites have settled, usually suffer from the urticaria. But science has not succeeded in finding a convincing relationship between the worm infestation and the urticar rash. For this reason, recently doctors are trying not to prescribe antiparasitic drugs to children with urticaria - this is pointless and merciless.

How to determine the allergen?

Common forms of urticaria with different causes can be attempted visually, but you shouldn’t hope for the high accuracy of such a diagnosis.

It is important to remember everything that the child ate, drank, which he touched, where he played and with what, what medicines he was given.

Remembering everything in a week is impossible and unnecessary, since urticaria is a sudden and quick reaction of the body. Most often it occurs within an hour after contact with the allergen, sometimes several hours pass from the moment of contact to the rash. therefore it’s enough to remember 2-3 hours of a baby’s life. The reason lies in them.

The simultaneous appearance of eating disorders, diarrhea, nausea, epigastric pain indicate food allergies. Most often it occurs in children under 2 years. Usually accompanied by symptoms of intoxication. If vomiting occurs, it is not necessary to stop it - as the body tries to get rid of the allergen, but the child should be watered and monitored so that dehydration does not occur, which will be indicated to parents by pointed features, bruises under the eyes, cyanosis on the face, dry skin.

With the development of a giant urticaria with massive edema, you should call an ambulance. The child at any time may develop angioedema. Waiting for doctors, you need to take the baby to the fresh air or open all the windows, balcony doors, that the crumbs had a constant flow of fresh air.

Cold urticaria occurs in the place that has been exposed to cold. Usually it is hands, face, nose, lips. If a child has light skin and blond hair, it is worth assuming that he has a sunny urticaria, especially if the baby was walking shortly before in sunny weather.

Also, thermal urticaria sometimes occurs when the temperature drops, for example, if a child is brought to a hot bath with a frost or taken out of the bath into a frost. This form of urticaria is the slowest. A rash can appear in a few hours and in a day.

For urticaria, chemicals, allergens distributed by animals, pollen and certain types of drugs usually occur abruptly, quickly and on a large scale. The exception is the toxic form of the disease, with it the affected area is limited to the place of contact with chemicals.

There are more objective ways to diagnose the causes of urticaria. To do this, contact your child allergist, who will appoint allergy tests. They are carried out using the most common allergens, but not always among the proposed set of antigens, the one that caused the rash in a particular baby is found. In this case, immunological blood tests are done - an analysis for immunoglobulin E, for specific immunoglobulins, the IMMUNOCAP test, if the child is already 3 years old, since such a test requires more venous blood.

Skin tests can also give the allergist a lot of useful information, which is useful in treating urticaria in a particular small patient. From the age of 3, children are applied to the skin with solutions containing common protein-antigens, which most often cause allergies. 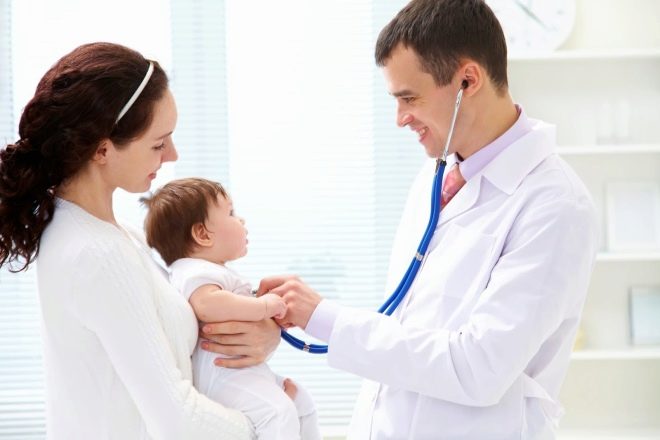 The reasons for the origin of rash in children, says Dr. Komarovsky in the video below.

Why do acne appear on a child’s buttocks?

Why did the child have a rash and what to do?

Rash on the body and itching in a child

Pimples on the face and body of newborns and infants

Streptoderma in children: from symptoms to treatment

What if there is a rash in a newborn or baby?

Symptoms and treatment of psoriasis in children

Hormonal rash in newborns and infants

Rash on baby’s belly
Information provided for reference purposes. Do not self-medicate. At the first symptoms of the disease, consult a doctor.