Dolphin therapy and its benefits for children

Every year interest in the treatment of animals is increasing. And this is not unreasonable. People are very helpful horses, dolphins, dogs, cats and other animals in the fight against their ailments. Each animal performs its functions and deserves great attention.

Do you know that: 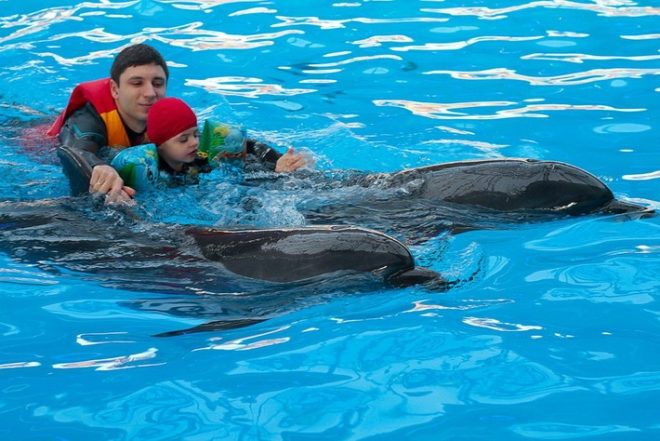 A bit of history

In the second half of the twentieth century, oceanariums and dolphinariums began to open in America. And thanks to the observation of the dolphins and their interaction with humans, it was noticed that these animals can be treated.

The founder of dolphin therapy is the American psychologist David Nathanson. He first noticed and described the benefits of communicating with dolphins. He watched a group of children with Down syndrome, who were in the water with dolphins, and saw that animals that were not specially prepared for therapeutic measures still treated the children very carefully. At the same time, during these conversations, quite good results were obtained in the fight against the disease.

Later, scientists and doctors from Canada, Japan, Germany and other countries began to study and develop dolphin therapy.

In Russia, this technique was recognized not so long ago, but the fact that in the USSR in Sevastopol at the same time as the Americans, GA Shurepova conducted classes with dolphin therapy with adults, during which the effectiveness of such exercises was proved, is remarkable. People began to feel better, their motor activity improved and their emotional state returned to normal. 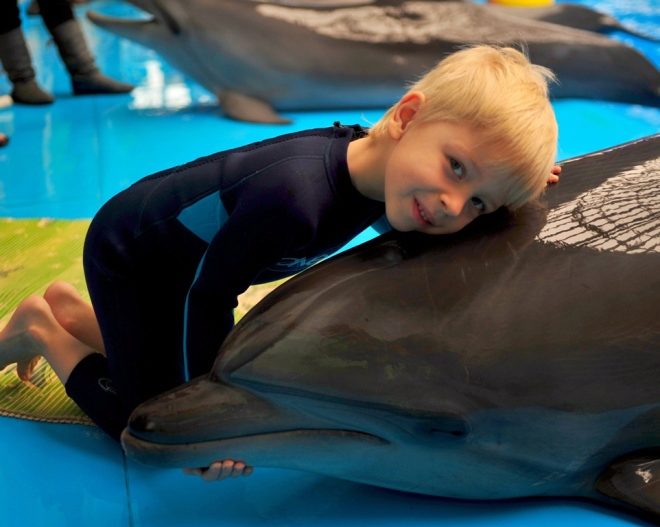 What is the use of communicating with dolphins? As in the case of treatment with other animals, several factors affect the human body.

Being in the water with an animal, the child relaxes and feels comfortable.. Confidence gives him the realization that next to him is such a large and strong animal, and that he performs with the dolphin some actions.

Dolphins are immensely good-natured and playful, they will never prefer loneliness and will definitely play with the child. They adore children. These animals give a powerful positive charge, significantly improve mood and give confidence.

Also to the positive factors should be attributed to the hydromassage received by a child in the water. It is especially useful and indicated for children with diseases of the musculoskeletal system, problems with muscle tone. During the movement of the dolphin, the oscillations of water are transmitted to the child, which is very useful for the whole organism.

But the main uniqueness of dolphins and the main therapeutic effect in their ability to produce specific ultrasounds.

Dolphins can make sounds of frequencies up to 200 kHz, while a person picks up a frequency of no more than 20 kHz. Interestingly, they do not affect the human organs, like all means of treatment, but on the cells of the body. Thus, they start, improve, activate all processes. 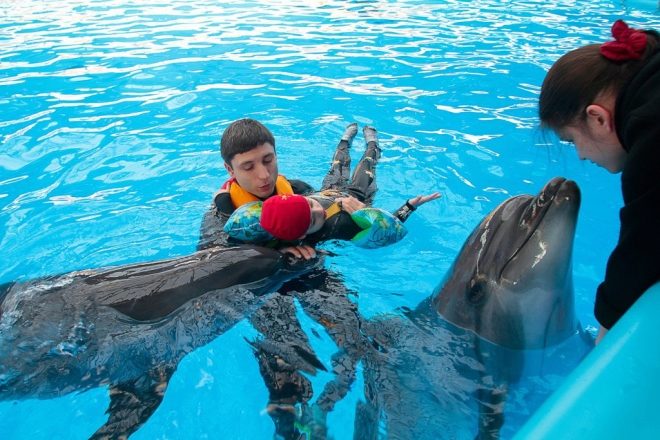 There are many benefits to communicating with dolphins to many people. But perhaps the most common disease that dolphin therapy is struggling with is autism in children. Also, this method of treatment is prescribed for the following diseases:

Dolphin therapy is sometimes recommended for adults, healthy people. Especially well it helps to relieve stress to representatives of such dangerous professions as: rescuer, fireman, policeman.

Of course, dolphin therapy has contraindications, although it seems at first glance absolutely safe. These include:

In case of cancer, it is not recommended to resort to treatment with dolphins, because it activates and triggers all the processes in the body, including the growth of tumors. However, if we are talking about the initial stage, then you should even turn to dolphins for positive emotions. 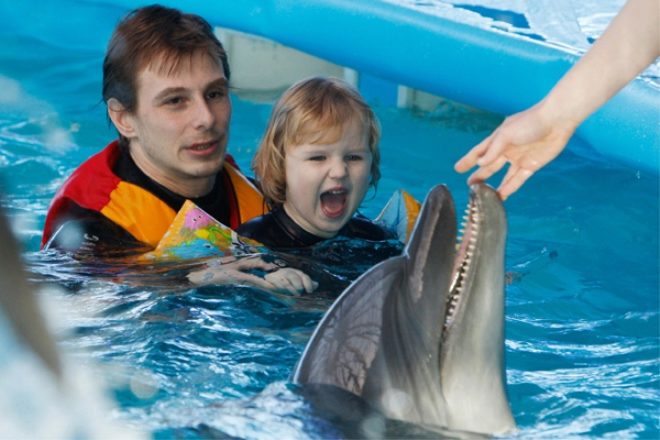 Dolphin therapy sessions can be carried out using one of the following methods:

The first method is used much more often, because dolphin therapy is designed to solve many serious health problems. And this requires a certain organization and intervention of specialists.

The second version of dolphin therapy, of course, also gives good results in many cases, for example, in getting rid of depression or just relaxation, but in our country it is less in demand.

How are the classes?

The course of treatment, as a rule, consists of 7-10 classes, each session lasts 10-15 minutes, in rare cases 20. It is worth noting that dolphins get very tired during the session, so they need time to rest.

The very same occupation is not only swimming in water with an animal, it is also a game with it. For example, an instructor may ask a child to throw a dolphin a ball or hoop.

Also, being on a side or a ladder, the child receives ultrasonic signals. This happens when the dolphin swims and touches the patient with the nose. To this is also set aside a certain time.

And most importantly - the interaction with the animal in the water. It is at this moment that the treatment is carried out to the maximum, the main psychological relief occurs, the child feels calm and satisfied, a very large amount of endorphin is released in the blood.

Experts say that the result is noticeable after the third lesson, sometimes after the first one. But it should be understood that the lower the age at which you start classes, the better the effect will be.

Where can I take a course in Russia

It is extremely difficult to find negative reviews about such a treatment method as dolphin therapy. After all, this is undoubtedly an effective way to combat many diseases.But such activities are quite expensive, and some families have to refuse treatment with dolphins precisely because. Also, you need to sign up for such sessions in advance, sometimes even six months or a year.

Dolphins have helped so many children and their parents. So, parents of autistic children say that after talking with dolphins, the child began to feel much more confident, got rid of phobias, became more open to communication, many children who had a speech delay began to pronounce words.

Some parents are grateful to the dolphins for completely curing their children from stutter.

There is also an opinion supported by the results that dolphin therapy is quite effective in case of enuresis.

Excitable, hyperactive children after the first lesson become calmer and more balanced in the opinion of doctors and patients. 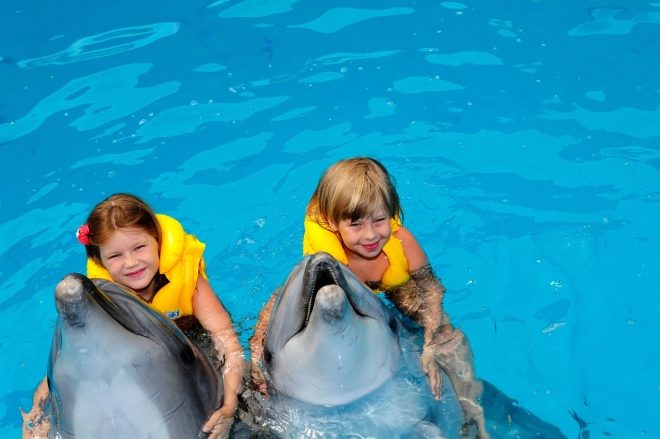 Some adults like to spend time this way - swimming with a dolphin. They say that it is very relaxing, gives strength and confidence, improves the overall physical condition.

Summarizing, we can say that dolphin therapy is a very effective method of treatment, yielding results rather quickly, requires regular training and a certain attitude.

About the benefits of dolphin therapy, see the video below.

Care and frequent problems in children after ear piercing

When and in what way is it better to pierce the ears of a child?
Information provided for reference purposes. Do not self-medicate. At the first symptoms of the disease, consult a doctor.