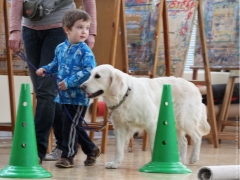 There is such a thing as zoomedicine. From the title it is clear that we are talking about the treatment of animals. Four directions are most known in Russia:

A special role is assigned to Canistherapy (from the Latin canis - a dog), since of all animals, a dog is the easiest to train. 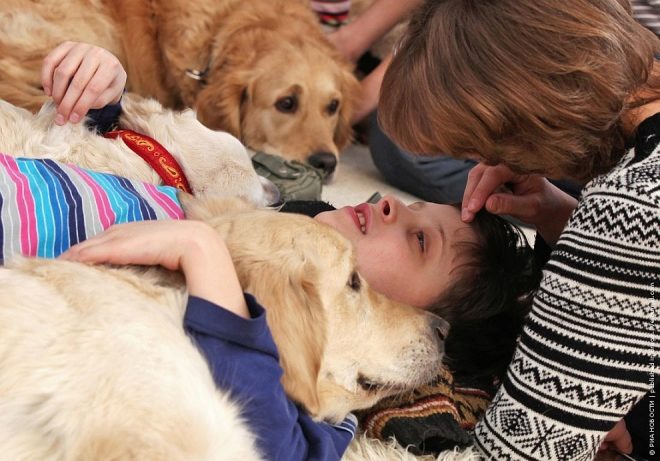 Canistherapy is an exercise performed by a patient and a dog under the guidance of a specialist in order to recover.

Sometimes you can meet a guide dog next to a visually impaired person. Abroad, you can often see dogs in nursing homes, when our smaller brothers help the elderly to get rid of certain diseases or just while away the old age. Still, Canistherapy has received the greatest popularity in the treatment of children - many years ago abroad and relatively recently in Russia.

According to some sources, they were known about Canistherapy for three thousand years ago. This is evidenced by drawings, fragments found at the excavations, historical documents.

In the 60s of the last century, the American psychologist Boris Levinson noticed that children who attend his sessions and have certain problems in communication, contacting his dog, receive psychological relief, become more relaxed, and the course of treatment lasts less.

Then he put forward a theory about the positive influence of a dog on a person and his emotional health. 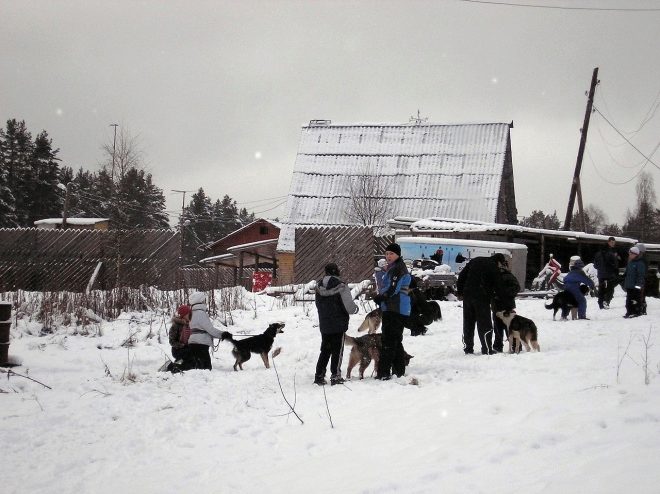 Tatyana Lyubimova has done a lot for the development of the national canistherapy. The development of this technique in Russia was prompted by her own sad experience. She gave birth to a child with cerebral palsy. After some time, unfortunately, he was gone. And she wanted to help children using dogs. And she succeeded! In 2004, the first in Russia Canistherapy center "Sunny Dog" was opened. It functions today.

Canistherapy can be divided into the following therapeutic areas:

If you have a tendency to allergies, especially on animals, there are injuries on the body, where infection can get, if the body temperature is elevated or respiratory diseases are present, a method such as canister therapy will have to be abandoned.

However, the fear of dogs is not a contraindication at all. It is just a matter of time.

Why is the effect of employment achieved?

During treatment, the child interacts with the dog. For someone, following the results of the lesson, it will be an achievement to take a few steps, and for someone - just to smile. But in any case, all the senses are involved in communicating with the animal, which in itself is useful and good. Therefore, we can say that the effect of employment is always achieved.

But if a person is initially determined that the treatment will not bring results, it is not worth it and start. Animals feel everything very well and are unlikely to be able to help if the patient comes to class with distrust or negativity.

For each case, the canister therapist develops a set of exercises.

Perhaps the above are the most used exercises. But their options are great. You can weave a dog pigtails, you can tie a scarf on her head, you can even read her books - all these activities are very popular with children. The main thing in all these exercises - close contact with the animal, which, of course, liberates, relaxes and makes kinder. 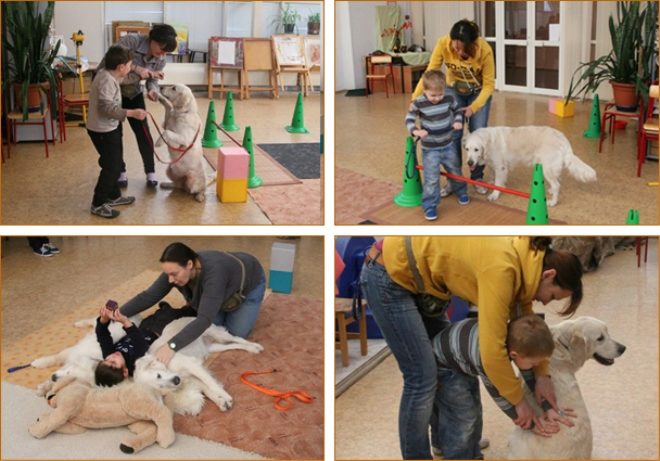 Not every dog ​​is suitable for the role of a Canister Therapist. In order to help people, each animal undergoes special training and passes an exam on the results of training.

As for breeds, it is considered that all breeds can be treated to a greater or lesser extent, even purebred individuals.

The main thing is that the dog be well educated, ideally fulfill the commands, be completely devoid of a sense of aggression and love people. The child may inadvertently offend the dog - the dog has no right to respond with hostility. She should treat well not only her master, but also all people.

The most popular breeds in Canistherapy are Labradors, Golden Retrievers, Giant Schnauzers. Sometimes they use such big, fluffy kind-hearted people like St. Bernards, Newfoundlands, Bobtails.

However, it is not recommended to involve in the treatment of children of fighting dogs and dogs of small breeds due to their quick temper.In addition, the latter do not have the same iron exposure as their large counterparts.

In Moscow, several centers treat children with the help of dogs. The most famous is the center "Sunny Dog". There are working dogs of the breed "Labrador" under the guidance of experienced professionals. Every year, children with various diseases perform at the monobreed labrador show visiting this center. Together with the dogs, the therapists they show very bright, saturated numbers.

In St. Petersburg, Canister therapists prefer to use Riesenschnauzers for work.

And in Obninsk, in the Kaluga region, the center "Rainbow" is functioning, where mongrel dogs assist, to put it simply, poochs.

In many large cities, they practice treatment by dogs. Murmansk, Omsk, Novosibirsk, Ryazan, Vladivostok, Yekaterinburg - this is not a complete list of cities where the "shaggy doctors" are ready to assist.

You can learn more about the Sunny Dog center and its successes in the following videos.

Reviews of canistherapy are mostly positive. Parents are very grateful to the animals and people who work with them for the results obtained during the treatment. It was noted that children quickly begin to show interest to dogs, they spend time with them with pleasure. 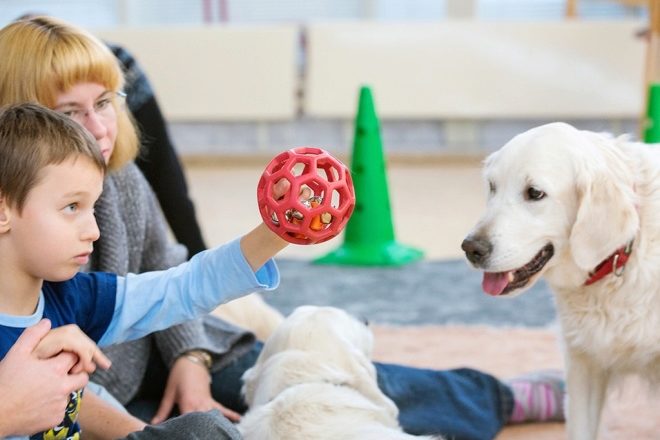 Canistherapy is especially popular for the treatment of children with autism. As you know, autists are very self-contained. They can sit for hours and look at one point. You can meet a lot of reviews, where they say that thanks to dogs, small patients become more open to the world around them, more sociable. There is even the case when, after a series of classes, an autistic girl began to perform on stage.

People faced with cerebral palsy, claim that communication with the dog allows you to improve coordination of movements, muscle tone.

If it comes about the violation of intellectual development, thanks to the dog, the child begins to be interested in what is happening around him, he develops attention, memory and speech.

It was also noted that our smaller brothers force sedentary or simply inactive children to move, thereby improving their physical condition. 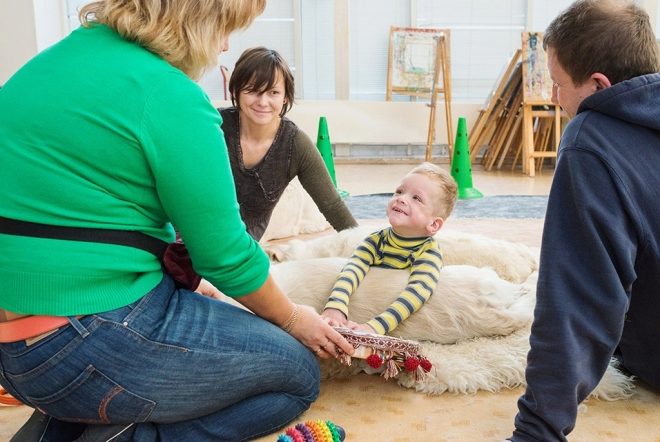 A number of cases are described when, after a brief contact with a dog, a small patient began to notice her and then her parents. Before that, he did not react at all to those around him.

You can even hear stories about how the child uttered individual words with significant problems with speech. And this is a very big achievement!

Sometimes it is possible to find the opinion that treatment by dogs is not as effective as experts say, but as a rule, people think so, who generally treat animals negatively and hardly ever choose this treatment for themselves or their children.

There are such cases when people dislike the smell of a dog or the look of wool left by a dog on their clothes. And someone just is not serious to alternative medicine.

But scientists have long proven that it is useful for people without any disabilities to spend time with a dog. Communicating with an animal only 15 minutes a day, a person's blood pressure returns to normal, his state of health and mood improves. Even a simple game with a dog allows you to relieve stress. 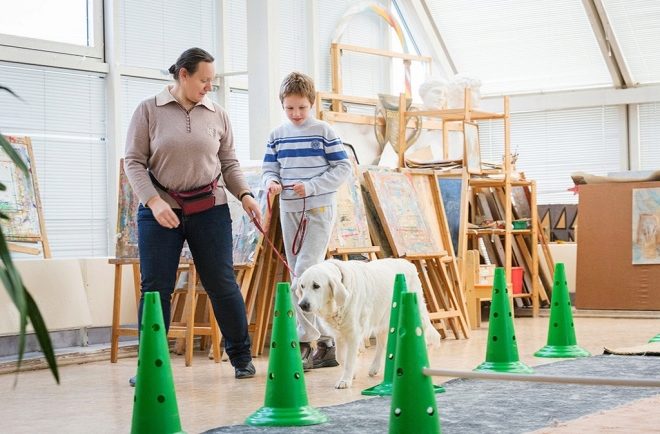 Next to an animal, a person always feels independent and free. And it is not without reason that families that have a pet are more friendly and open to communication. Look at the family photos with the dog ... People have very happy people. Is not it?

You will learn more about Canistherapy by watching the channel GuberniaTV.

What is animal therapy and what is its use for children?

Blood pressure norms in children by age, what to do in case of deviations

Care and frequent problems in children after ear piercing
Information provided for reference purposes. Do not self-medicate. At the first symptoms of the disease, consult a doctor.