Signs and symptoms of torticollis in newborns and infants 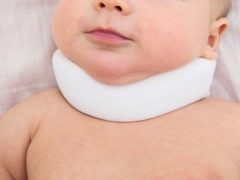 Many young mothers heard and read about such children's pathology as torticollis. Even experienced doctors can not always see her in a newborn, and therefore the question of how to determine the curvature of the neck in a child remains one of the most burning.

A crooked neck is an anomaly in which the baby’s neck is forced to be in an anatomically wrong position. Wherein crumbs head leans toward the opposite side of the lesion. The cause of this phenomenon are abnormal development or injury of the neck muscles, vertebrae or nerves.

Most often, such a diagnosis is made to newborn or nursing girls, and in most cases the problem is right. The congenital form of the disease is evident almost immediately after birth. Acquired can occur at any age.

The cause of congenital curvature of the neck are the pathology of pregnancy, fetal distress of the fetus, difficult childbirth, birth trauma. Most often - late toxicosis, lack of water, multiple pregnancies, long entanglement of the baby with the umbilical cord around the neck, pelvic and transverse disposition of the baby in the womb, rapid or prolonged labor, the use of obstetric devices to extract the child, stimulation of labor, cesarean.

Acquired forms of pathology usually occur due to traumatic or other effects on muscle tissue, cervical vertebrae, and nerve endings.

If the infant has congenital torticollis, then its characteristic clinical signs are usually visible in the first hours after birth or within 1-2 days after birth. The location of the baby’s head is inadequate, and doctors report this unpleasant news to the newly-made mother while she is still in the maternity hospital.

A mild form of congenital abnormality may remain unsolved at this early stage. Here, much will depend on the observation of the parents and the experience of the pediatrician who will observe the baby after discharge from the hospital.

If the cause of the curvature lies in the pathological childbirth, in birth trauma, then the first signs can be noticed only 2-3 weeks after birth. They gradually increase and are usually determined by the orthopedic physician as part of the first scheduled physical examination, which is held at the age of 1 month.

With mild distortion, parents can take up to 2–3 months and even no longer guess that the baby is not okay with the neck.

Careful observation of the baby will allow to suspect pathology earlier. A kid with torticollis has a fixed inclination of the head to the shoulder. At the same time, the chin is turned to the side, which is the opposite side of muscle damage: if the pathology exists on the right side, then the turn will be in the left and vice versa.

The neck muscles not only provide the head with mobility, but also support the vertebrae in the correct position. Therefore, any violation - neurogenic, compensatory, articular or bone - will be accompanied by a clear outline and some protrusion of the neck muscle (usually - sternocleidomastoid). The muscle will be tense even at rest. 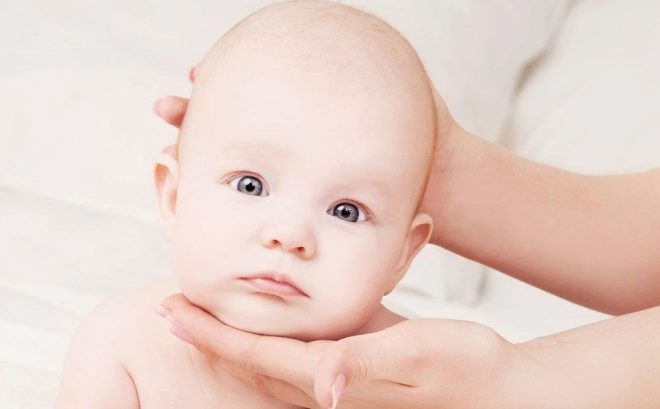 If an adult tries to gently and gently turn the head to the central correct position, then he will meet resistance: the tot begins to cry, shout, worry, protest. The head is limited in movement, it is not always possible to turn it, and if it succeeds, the baby quickly returns it to its original painful state.

The most pronounced bilateral torticollis - it is almost impossible not to notice. In babies with such pathologies, the head is tilted back or, on the contrary, pressed with its chin to the sternum. Turns to the right and left side are limited or impossible.

Osteogenic torticollis, the fault of which was the dysfunction of the vertebrae, can be recognized by a bend unusual for the cervical region, by a low head landing.

If the anomaly is of neurological origin, then extremely tense muscles are usually groped on one side of the neck, and on the other, inadequately relaxed.

Kids with neurogenic torticollis from the side of the lesion clamp their hand into a fist, on the same side they are bent at the knee and the leg is completely accessible for the child.

The older the child becomes, the more pronounced the signs of torticollis. After 6 months, violations of motor functions become noticeable: the child does not hold the head well, it is late to master what his peers have long mastered - sitting and crawling.

Such babies crawl asymmetrically, it is more difficult for them to keep balance in a sitting position, and then standing. Their teeth are erupting with great delay.

Over time, deformations of the bones of the skull, face, can be damaged vision and hearing one-sidedly. Children with torticollis suffer from headaches.

When warning signs are found, parents should contact a pediatric orthopedic surgeon. You will also need advice from a neurologist, pediatrician, oculist and ENT doctor. After the examination, treatment will be prescribed, which is based on massage, exercise therapy, physiotherapy, wearing of cervical orthoses, etc.

It is important not to delay the treatment, because the earlier the pathology is found, the more effective the treatment is. When handling up to six months, therapy brings results and the deformity can be corrected in 90% of cases. The older the child becomes, the more difficult the curvature of the neck is treated. 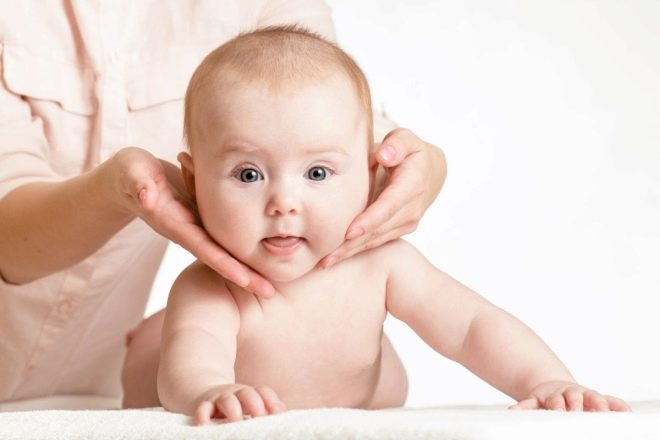 More information about the tortuosity in infants tells a specialist in the video below.

What is apnea in children and what are the features of the night form?

Alopecia in children: causes and methods of treatment

Hemorrhagic vasculitis in children: from symptoms to treatment

What is dysarthria in children and how to treat it?

Treatment of a weeping wound in a child

Symptoms and treatment of heat stroke in a child

High temperature in a child
Information provided for reference purposes. Do not self-medicate. At the first symptoms of the disease, consult a doctor.