Bobotik for newborns - will it allow to get rid of colic? 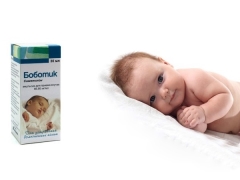 When new parents face a problem colic, they try to help their baby as soon as possible to get rid of pain and discomfort.

Among the drugs recommended with colic, products containing simethicone are popular. One of the drugs with this active ingredient is Bobotik. Does this drug use in newborns and will its use allow to get rid of colic?

The main reasons for assigning Bobotic to a baby are:

Side effects and contraindications

This drug should not be prescribed for obstructions of the digestive tract, for example, in case of obstruction, as well as hypersensitivity to the components of the drug. Among the side effects that causes Bobotic, there are only allergic reactions.

A bobotik is a thick, opaque whitish liquid that has a fruity odor. The main component of such an emulsion is simethicone. Among the excipients are water, flavoring, sweetener, preservatives.

This drug is a group of drugs against flatulence, since its main active ingredient directly affects the gases formed in the intestine.

The drug envelops the gas bubbles and affects their surface, which leads to their rupture. As a result, gases are rapidly excreted from the intestines, painful sensations disappear, swelling disappears.

Simethicone itself is not absorbed in the children's intestines, but passes through it in transit, excreted with feces unchanged.

Can I give newborns?

This drug is not prescribed before the age of 28 days, so Bobotic is not given to newborns.

Instructions for use: how and in what dosage to give?

Bobotik is sold in bottles of 30 ml, in which there is a tube-dropper. To drip the right amount of the drug, you should turn the bottle vertically with a dropper down. In addition, before each use the product should be shaken.

Bobotik give the child after eating 4 times a day. A single dose for children under 2 years old is 8 drops. This amount of the drug contains 20 mg of active ingredient. From 2 years of age, the dosage rises to 14 drops at a time, and from six years of age, to 16 drops at a time. Bobotik drops can be mixed with boiled water and baby food (breast milk, formula).

If the drug is given before diagnostic studies, the dosage will be different. For babies up to 2 years, the day before the study is given 10 drops in the morning and 10 more drops in the evening. For children 2-6 years old, a single dose is 16 drops, and a child over six years old is given 20 drops of the medicine per dose.

In case of an overdose of this drug, there will be no harm to the health of the child, since it is not absorbed through the intestinal walls. Excess simethicone will be eliminated from the intestine without damaging the baby.

How long does it take to act?

For most babies, the effect of taking this drug comes in 15-20 minutes.

If it is not possible to give the child Bobot, you can use similar drugs that have the same basic substance and the same principle of action.

Both drugs are simethicone emulsion, so their action is the same. The main difference is the concentration of the active substance, which affects the dosage.

Since in Espumizane Simethicone is contained in a smaller amount, its single dose is 25 drops. If you give children Bobotik, the dosage at a time is only 8 drops. The choice between these two drugs should also take into account their additional components, since they differ.

Many parents preferred Bobotic to other drugs with simethicone because of its lower dosage. Almost all mothers say that children drink this drug with pleasure, because it has a pleasant taste. Also, parents are satisfied with the efficiency of packaging - one bottle is enough for a long time.

According to reviews, for most babies, a remedy helps to reduce pain in the tummy and sleep better. However, some parents claim that Bobotik did not help improve the condition of the baby. There are also negative reviews associated with allergies to additional components of the drug.

Dr. Komarovsky about colic in a newborn

Warmers for newborns from colic

Sab simplex for children: instructions for use

How to do a massage for colic newborn?

Plantex as a remedy for colic in newborns

Espumizan for newborns: quick help with colic
Information provided for reference purposes. Do not self-medicate. At the first symptoms of the disease, consult a doctor.