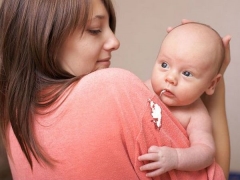 Most women after childbirth experienced regurgitation, because almost every newborn spit some feminine milk or infant formula after feeding. This process is physiological and normal, if the volume of the regurgitated is small, and the general condition of the toddler is not broken. So the baby "gets rid of" the air swallowed during feeding, as well as from excess food, which got into his tiny stomach with active sucking along with the air.

However, sometimes regurgitation is a symptom of the disease, and if mother sees blood in milk, it is always scary. Is it dangerous to regurgitate with blood and why it happens in babies, and also what to do to the mother if the infant burped milk, in which there is an admixture of blood?

Why is regurgitation with blood

The most common cause of regurgitation with milk, in which blood is present, is the infant's ingestion of blood during sucking, when there are cracks on the mother's nipples. If a woman has very sensitive nipples, whose skin bursts easily when feeding babies, blood from such cracks will fall into the toddler's stomach with food, and during regurgitation, her mother will notice her admixture in milk, which the baby will “return”.

The second, less frequent cause of spitting blood is damage to the blood vessels of the digestive tract of the baby. This is a very serious problem, which helps to diagnose additional examinations of the child.

A newborn baby may also burp with blood on the first day of life if he swallowed amniotic fluid during birth. This is a fairly common situation that does not indicate any pathology.

Having noticed streaks of blood in the milk that the baby burped after feeding, you should carefully observe the behavior of the infant.

The main thing is to make sure that the child does not have vomiting:

You should also inspect the nipples - if they appear cracks, then they are the cause of blood during regurgitation. If the mother’s nipples are intact, and blood appears during spitting repeatedly, the baby should be taken to the doctor’s appointment. There are also other warning signs that require immediate medical examination.

When to see a doctor

Mom should immediately show the crumbs to the pediatrician if:

Such symptoms may indicate a disease in the infant, therefore, it is not necessary to delay in seeking medical help.

How to start hardening a child and what principles to follow?
Information provided for reference purposes. Do not self-medicate. At the first symptoms of the disease, consult a doctor.