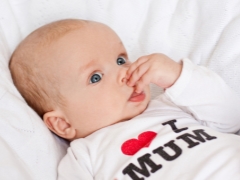 Any discomforts in an infant baby cause concern and anxiety among parents. However, some symptoms occur in quite healthy babies, for example, a runny nose. In this case, it is called physiological.

To physiological carry a runny nose, which is natural for the child's body in the first months of life. It appears due to the adaptation of the newly born baby to nose breathing.

While in utero oxygen was supplied to the crumbs from maternal blood, the airways did not take part in the process of respiration. And immediately after the birth, the glands of the nasal mucosa do not function, because there was no need for moisturizing the nasal cavity during their stay in the womb.

When a child begins to breathe, it becomes necessary to clean, warm and moisten the air entering the lungs. The nasopharyngeal glands are responsible for this, and, since their work is not yet regulated, mucus in the nose begins to be produced in excess.

As soon as the feedback is turned on (the body "understands" that so much mucus is not required for moisturizing the nasal cavity), the secretion of mucus is reduced and the runny nose passes on its own. Provided that parents do not interfere in this natural process.

It is possible to determine that a baby has a physiological rhinitis by the following signs:

How long does it take?

The average duration of the physiological rhinitis in infancy is 8-10 weeks. Often, by the age of three months, all the symptoms of such a problem disappear completely. If in the room where the baby is, all the conditions facilitate the production of mucus, a runny nose can go away in a few days. The optimal parameters for a newborn's room are 50-60% humidity and the temperature is not higher than +20.°WITH.

With excessively dry air or excess dust in the room, the duration of the cold is delayed.

If the crumbs of a crumb is indeed physiological, the doctor will recommend to provide in the room where the baby is, sufficiently moist, clean and cool air. Parents need to:

In the following fragment of the TV program "Without a prescription," the doctor of medical sciences will tell you how you can cure a newborn's runny nose without causing damage to his health.

What can not be done?

When the physiological rhinitis in the infant should not be instilled into the nose vasoconstrictor drugs, suck mucus from the nose of the baby with an aspirator or a small enema.

Such treatment will dry the mucous membrane, giving it a signal for even more active glands. Accordingly, mucus will appear even more, and the duration of a cold will increase.

Is it possible to walk?

Since the well-being of a baby with a physiological rhinitis is not disturbed, there are no reasons forcing a child to stay at home and refrain from daily walks. Moreover, on the street the baby will breathe fresh fresh air, which has a beneficial effect on the condition of the nasal mucosa. So most pediatricians support the idea of ​​walking with babies if he has a cold. You just need to wear a baby for the weather.

Parents should consult a doctor if:

Watch the following video in which Dr. Komarovsky talks about how to treat a cold.

Why do babies and babies often sneeze?

How to sterilize oil for newborns?

Reflexes of the newborn

Newborn asphyxia: from cause to effect
Information provided for reference purposes. Do not self-medicate. At the first symptoms of the disease, consult a doctor.