At what age can cow's milk be given to a baby? 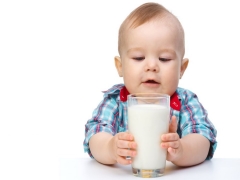 At the time of our grandmothers, cow's milk helped to feed many babies when breastfeeding was impossible, but nowadays milk formula does a great job with this task. This causes controversy between young mothers and the older generation.

Should we give milk from a cow to a small child instead of a mixture, or is it dangerous to his health? How to transfer a baby from breast milk to cow? What is the benefit and harm of this product for the child's body? At what age is it best to introduce children to him? Is it necessary to boil it or can it be given immediately from under the cow? 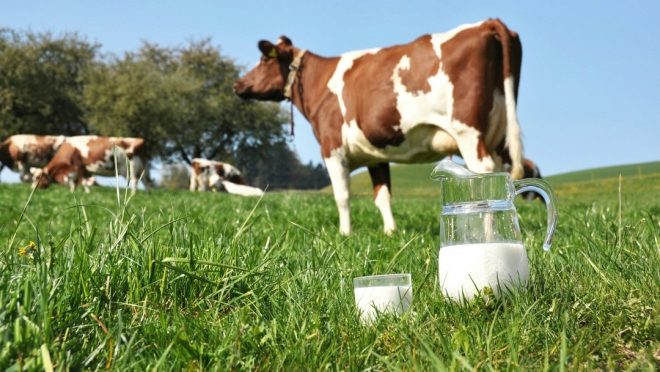 These and many other questions worry almost every young mother. Let's try to understand them, and also find out why it is impossible to give it to young children, as modern pediatricians say.

It should be noted that all these useful properties can be obtained only with the correct and timely introduction of such a product into the diet of kids.

From what age to give?

Cow's milk appears in the diet of breastfed babies at the age of 9 months, as an ingredient in milk porridge. An infant fed with a mixture can start cooking such porridge a little earlier - from 7-8 months. In this case, the daily dose of cow's milk is not more than 100-150 ml.

If we are talking about replacing breast milk, breast or adapted mixture, then it is not advised to do this for up to 1 year. If it is impossible to breastfeed a baby, the best substitute for children in the first year of life is milk formula. Although it is made from the milk of cows, but in the process of processing it is being cleaned, and the composition as close as possible to that of women.

Children older than one year, cow's milk can be given as a drink in a small amount (up to 200 ml).

Regularly giving such a product in a larger volume to a child every day is possible after 3 years.

Separately, we note that the child is offered a product with a fat content of 2.5-3.2%. If a mother is interested in when to start giving skim milk to her child, then she should be aware that a low-fat product is not recommended until 2 years of age.

The harm of cow's milk for babies is associated with significant differences in its composition from the mother.

Breast milk is the ideal food that should be given to newborns and fed to all babies at least until 6 months of age. A cow gives him a number of parameters:

Cow milk should not be drunk in such cases:

A popular pediatrician is convinced that whole cow milk should not be given to children under one year old. He emphasizes that the early introduction of such a product into the infant’s diet instead of the adapted mixture provokes the development of rickets and negatively affects the intestines of the child.

If the mother does not have the opportunity to breastfeed the baby after 3 months or she wants to complete breastfeeding at the age of 5-6 months, Komarovsky advises to buy and give the infant an adapted mixture.

The inclusion of milk in the children's diet after a year Komarovsky calls acceptable, but at the age of 1 to 3 years, a famous doctor advises to limit the amount drunk per day to two glasses. He emphasizes that when it is possible to purchase special milk for the child, recommended for this age group, such a product will be much more preferable than the usual milk from a cow.

As for cow's milk in the diet of three-year-olds and older children, Komarovsky believes that this product after 3 years can be consumed by children without restrictions, if they like it and do not cause allergies.

Recommendations from Dr. Komarovsky on the introduction into the diet of baby cow and goat milk, listen to the next video.

For baby food, safety is very important, so in most cases, cow's milk, which is offered to babies, must undergo a heat treatment. Boiling helps to avoid such a serious illness as brucellosis (cows tolerate it), which is a great danger to the child’s body.

If the mother is not sure of the quality, it must be boiled. Boiled milk retains all proteins, carbohydrates, fats and many other substances. It can only slightly reduce the content of vitamins, but it is not as dangerous as the infection of dangerous infections. In its unboiled form, it is permissible to give it to children only if it is received from a cow that is kept by your family or close friends (you are confident in her health).

How to enter the diet of kids?

Due to the risk of allergy, the acquaintance should be careful and gradual, and every mother should know how to breed this product, since the first time milk is given to children diluted. When the baby is 1 year old, you can take 1 part of cow's milk and combine it with 3 parts of boiled water.

The first portion, which is given to the child in the morning feeding, is 1 teaspoon. If the reaction is not followed, the dose can be increased to 200 ml. Next, begin to reduce the portion of water, until you completely remove it and you will not give the baby whole milk. Usually, undiluted product begins to be given from the age of 3 years. The recommended volume for a child older than 3 years is 500-700 ml per day.

How to choose for a child

If you want to buy milk for a child aged 1-3 years, the best option would be a product marked “for children”. It is produced in environmentally safe areas and is more closely monitored, and also sold in more reliable packaging.

Buying regular milk for a child over 3 years old, you should opt for an UHT or sterilized product. It undergoes thorough processing so that no dangerous bacteria remain in it. When purchasing it carefully read the information on the package, specifying the fat content and shelf life.

Comparison of the benefits of cow and goat milk, see the program "To live healthy."

At what age can you give bread to a child?

At what age can you give a child a liver?

At what age can you give eggs to a child?

At what age can you give a child a watermelon?

From how many months can you give children compote and how to do it right?

From what age and when can you give a child strawberries?

Vegetable oil in the diet of children: at what age to give and what to consider?

From how many months can you give baby kefir?
Information provided for reference purposes.Do not self-medicate. At the first symptoms of the disease, consult a doctor.