When can I give broth to a child and soups on it? 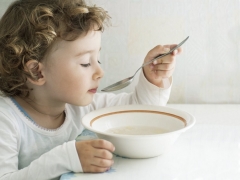 At the time of our grandmothers, meat broth was considered an exceptionally useful dish from which they began introducing meat products into the diet of babies. It was given to children older than 6 months, and a month later they began to introduce mashed meat. This early introduction of meat broth into the diet of babies was promoted by the opinion that this product is easily digested and very well absorbed in the children's body.

Nowadays, the approach to acquaintance of babies with meat dishes has changed.

All pediatricians recommend first to introduce meat mashed potatoes from 8 months of age into the feed, and only after good tolerance and addiction to cook meat broth for children.

This is due to the discovery in the broth of a significant amount of extractive compounds that affect metabolic processes in the children's body. Such compounds include creatinine, taurine, glucose, cholesterol, lactic acid, urea, taurine, and some other substances with high chemical and biological activity. They pass into the water from the meat during cooking and cause the taste and many properties of meat broth.

When to put in a lure

Acquaintance with meat broth is recommended to be held after meat puree is included in the child's menu. You can offer broth to the baby when the baby is used to meat and tolerates it normally. Approximately it occurs in 9-10 months., that is, a month after the start of feeding meat. The introduction of a new product is carried out gradually, adding it in small quantities to vegetable dishes.

If a baby is given supplemental food according to Komarovsky's recommendations, then familiarity with meat broth as a component of soups occurs between the ages of 9-15 months, depending on the development of the baby, the presence of teeth, individual food preferences and other factors. This product is injected when the crumb has already tried dairy products, cereals and vegetables. The next step Komarovsky advises to prepare vegetable puree with the addition of meat broth, and then enter the meat.

If the child has problems with the kidneys or liver, as well as in the case of a tendency to allergies, beef soup is recommended to be administered a year or even later.

Why it is impossible to enter early

More than 50% of extractive substances pass into meat broth, therefore, it is recommended to begin feeding baby food with meat products with boiled meat. Such a product lasts several hours in the stomach of the crumbs, where it is slowly digested under the influence of gastric juice. Due to this, extractive compounds remaining in the meat enter the bloodstream gradually and partially excreted with feces. They take part in metabolic processes and split, without having a negative impact on the kidneys.

Unlike meat, broth is unable to linger in the stomach. He almost immediately enters the intestine, where it begins to be actively absorbed. As a result, all substances from the broth quickly enter the bloodstream. For their disposal the liver functions with increased stress. At the same time, the concentration of uric acid in the blood increases greatly, which causes increased excitability, joint pain and other symptoms of neuro-arthritic diathesis.

That is why children up to 7-8 months, in which the digestive tract is not quite mature, the walls of the stomach and intestines are more permeable, and the liver is not active enough, the meat broth is harmful. The beginning of the introduction of the broth with the addition of such a product in vegetable puree and soups with cereals slows down the absorption of its extractive substances and get used to the new product.

How to put in a lure

When cooking vegetable puree or vegetable soup for the first time for a child, add only a few tablespoons of meat broth. If the crumb has reacted to the dish normally, gradually increase the added volume of broth to 30 ml. By the year the child is advised to give no more than 50 ml of broth per day.

As children older than a year begin to offer not only boiled meat, but also steamed, in the oven and in other ways, more and more extractive substances begin to flow. And because the restriction of meat broth is no longer relevant.

How to cook broth for a child

The recipe for soup with meatballs for a child, you can see in the next video.

How to give the child a yolk and introduce it to the supplements?

At what age can cow's milk be given to a baby?

Is it possible for children to eat fried and from what age to give such dishes?

At what age can you give the child drying?

When to introduce milk porridge in the feed and what is better to choose?

What fish is good for children and how to cook it?

At what age can you give your child red caviar?

At what age can a currant be given to a child?
Information provided for reference purposes. Do not self-medicate. At the first symptoms of the disease, consult a doctor.